Home | | Medical Microbiology | Isolation and Identification of Bacteria - Laboratory Diagnosis of Infectious Diseases
Posted On :  30.07.2017 09:25 am

Isolation and Identification of Bacteria - Laboratory Diagnosis of Infectious Diseases

Growth and identification of the infecting agent in vitro is usually the most sensitive and specific means of diagnosis and is thus the method most commonly used.

Growth and identification of the infecting agent in vitro is usually the most sensitive and specific means of diagnosis and is thus the method most commonly used. Most bacteria and fungi can be grown in a variety of artificial media, but strict intracellular microorgan-isms (eg, Chlamydia, Rickettsia, and human and animal viruses) can be isolated only in cultures of living eukaryotic cells.

Isolation and Identification of Bacteria

Almost all medically important bacteria can be cultivated outside the host in artificial cul-ture media. A single bacterium placed in the proper culture conditions will multiply to quantities sufficient to be seen by the naked eye. Bacteriologic media are soup-like recipes prepared from digests of animal or vegetable protein supplemented with nutrients such as glucose, yeast extract, serum, or blood, to meet the metabolic requirements of the organism. Their chemical composition is complex, and their success depends on match-ing the nutritional requirements of most heterotrophic living things.

Growth in media prepared in the fluid state (broths) is apparent when bacterial numbers are sufficient to produce turbidity or macroscopic clumps. Turbidity results from reflection of transmitted light by the bacteria; depending on the size of the organism, more than 106 bacteria per milliliter of broth are usually required. Most bacteria grow diffusely, but strictly aerobic bacteria may grow as a film on the surface of the broth, and other bacteria grow as a sediment. The addition of a gelling agent to a broth medium allows its preparation in solid form as plates in Petri dishes. The universal gelling agent for diagnostic bacteriology is agar, a polysaccharide extracted from certain types of seaweed. Agar has the convenientproperty of becoming liquid at about 95°C but not returning to the solid state as a gel until cooled to less than 50°C. This allows the addition of a heat-labile substance, such as blood, to the medium before it sets. At the temperatures used in the diagnostic laboratory (37°C or lower), broth – agar exists as a smooth, solid, nutrient gel. This medium, usually termed “agar,” may be qualified with a description of any supplement (eg, blood agar). 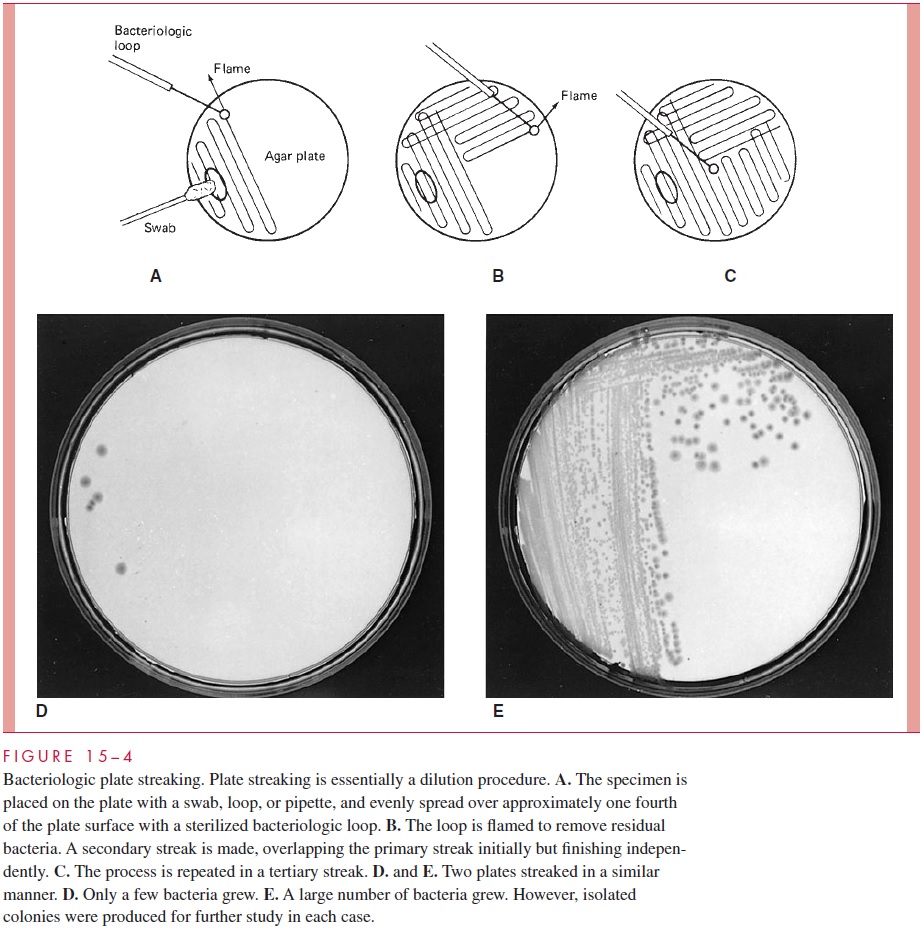 Separation of bacteria may be accomplished by using a sterile wire loop to spread a small sample over the surface of an agar plate in a structured pattern called plate streak-ing.Bacteria that are well separated from others grow as isolated colonies, often reaching2 to 3 mm in diameter after overnight incubation. For diagnostic work, growth of bacteria on solid media has advantages over the use of broth cultures. It allows isolation of bacte-ria in pure culture (Fig 15 – 4), because a colony well separated from others can be as-sumed to arise from a single organism or an organism cluster (colony-forming unit). Colonies vary greatly in size, shape, texture, color, and other features. For example, colonies of organisms possessing large polysaccharide capsules are usually mucoid; those of organisms that fail to separate after division are frequently granular. Colonies from dif-ferent species or genera often differ substantially, whereas those derived from the same strain are usually consistent. Differences in colonial morphology are very useful for sep-arating bacteria in mixtures and as clues to their identity. Some examples of colonial mor-phology are shown in Figure 15 – 5. 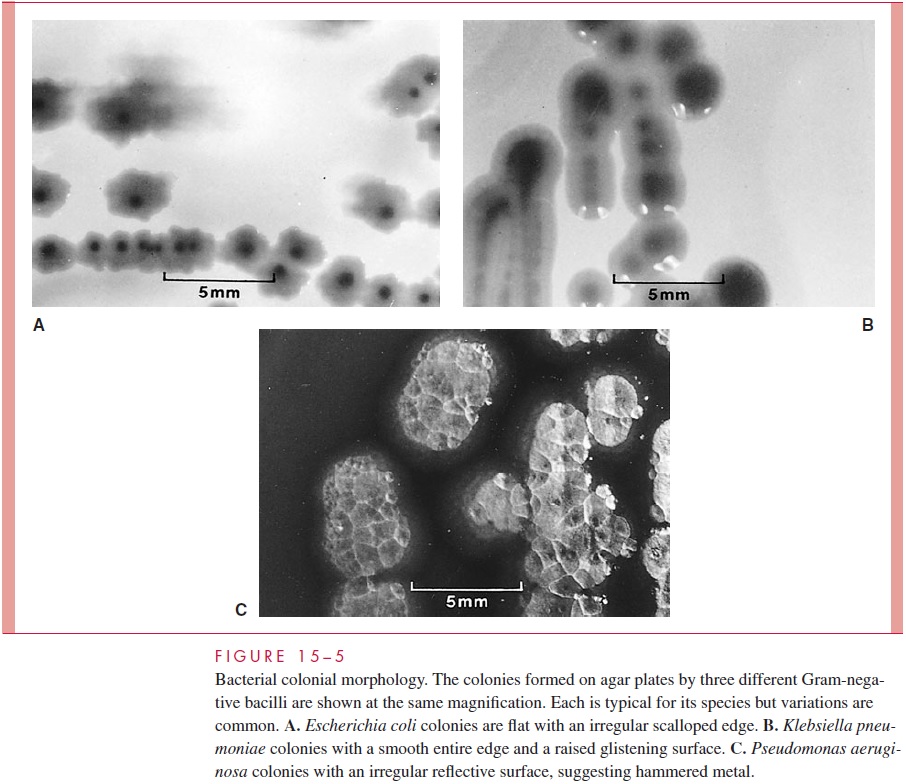 New methods that do not depend on visual changes in the growth medium or colony formation are also used to detect bacterial growth in culture. These techniques include op-tical, chemical, and electrical changes in the medium, produced by the growing numbers of bacterial cells or their metabolic products. Many of these methods are more sensitive than classical techniques and thus can detect growth hours, or even days, earlier than clas- sical methods. Some have also been engineered for instrumentation and automation. For example, one fully automated system that detects bacterial metabolism fluorometrically can complete a bacterial identification and antimicrobial susceptibility test in 2 to 4 hours.

Over the past 100 years, countless media have been developed by bacteriologists to aid in the isolation and identification of medically important bacteria. Only a few have found their way into routine use in clinical laboratories. These may be classified as nutrient, se-lective, or indicator media.

Nutrient Media The nutrient component of a medium is designed to satisfy the growth re-quirements of bacteria to permit isolation and propagation. For medical purposes, the ideal medium would allow rapid growth of all bacteria. No such medium exists; however, several suffice for good growth of most medically important bacteria. These media are prepared with enzymatic or acid digests of animal or plant products such as muscle, milk, or beans.

The digest reduces the native protein to a mixture of polypeptides and amino acids that also includes trace metals, coenzymes, and various undefined growth factors. For example, one common broth contains a pancreatic digest of casein (milk curd) and a papaic digest of soy-bean meal. To this nutrient base, salts, vitamins, or body fluids such as serum may be added to provide pathogens with the conditions needed for optimum growth.

Selective Media Selective media are used when specific pathogenic organisms aresought in sites with an extensive normal flora (eg, N. gonorrhoeae in specimens from the uterine cervix or rectum). In these cases, other bacteria may overgrow the suspected etio-logic species in simple nutrient media, either because the pathogen grows more slowly or because it is present in much smaller numbers. Selective media usually contain dyes, other chemical additives, or antimicrobics at concentrations designed to inhibit contami-nating flora but not the suspected pathogen.

Indicator Media Indicator media contain substances designed to demonstrate biochemi-cal or other features characteristic of specific pathogens or organism groups. The addition to the medium of one or more carbohydrates and a pH indicator is frequently used. A color change in a colony indicates the presence of acid products and thus of fermentation or oxidation of the carbohydrate by the organism. Other indicator media may enhance the production of a pigment or other changes useful for early recognition of certain bacteria. The addition of red blood cells (RBCs) to plates allows the hemolysis produced by some organisms to be used as a differential feature . In practice, nutrient, selec-tive, and indicator properties are often combined to various degrees in the same medium. It is possible to include an indicator system in a highly nutrient medium and also make it selective by adding appropriate antimicrobics.

Aerobic Once inoculated, cultures of most aerobic bacteria are placed in an incubatorwith temperature maintained at 35 to 37°C. Slightly higher or lower temperatures are used occasionally to selectively favor a certain organism or organism group. Most bacte-ria that are not obligate anaerobes will grow in air; however, CO2 is required by some and enhances the growth of others. Incubators that maintain a 2 to 5% concentration of CO2 in air are frequently used for primary isolation, because this level is not harmful to any bacteria and improves isolation of some. A simpler method is the candle jar, in which a lighted candle is allowed to burn to extinction in a sealed jar containing plates. This method adds 1 to 2% CO2 to the atmosphere.

Anaerobic Strictly anaerobic bacteria will not grow under the conditions described pre-viously, and many will die if exposed to atmospheric oxygen or high oxidation – reduction potentials. Most medically important anaerobes will grow in the depths of liquid or semi-solid media containing any of a variety of reducing agents, such as cysteine, thioglycol-late, ascorbic acid, or even iron filings. An anaerobic environment for incubation of plates can be achieved by replacing air with a gas mixture containing hydrogen, CO2, and nitro-gen and allowing the hydrogen to react with residual oxygen on a catalyst to form water. A convenient commercial system accomplishes this chemically in a packet to which wa-ter is added before the jar is sealed. Specimens suspected to contain significant anaerobes should be processed under conditions designed to minimize exposure to atmospheric oxy-gen at all stages.

Routine laboratory systems for processing specimens from various sites are needed be-cause no single medium or atmosphere is ideal for all bacteria. Combinations of broth and solid-plated media and aerobic, CO2, and anaerobic incubation must be matched to the organisms expected at any particular site or clinical circumstance. 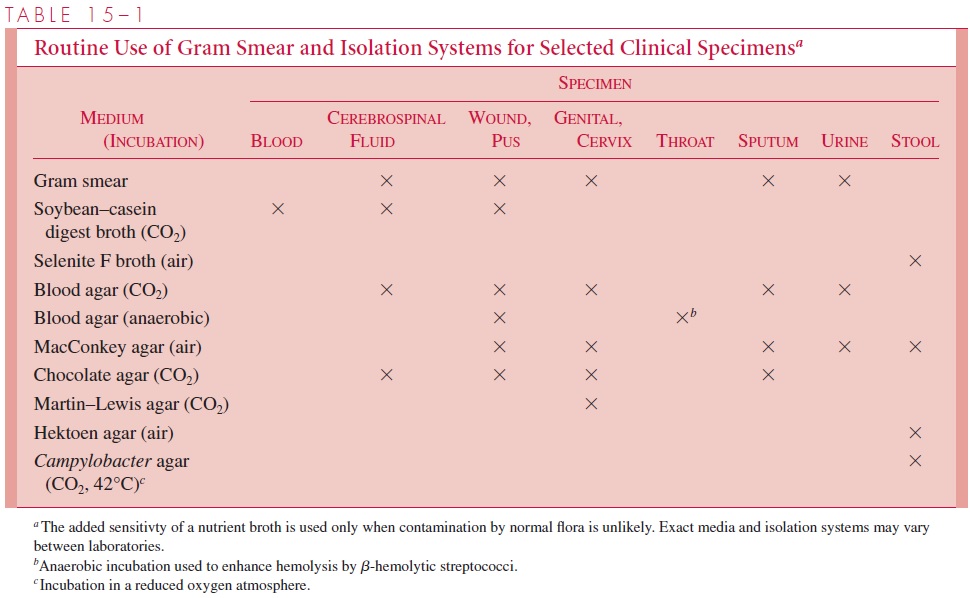 Examples of such routines are shown in Table 15 – 1. In general, it is not practical to routinely include spe-cialized media for isolation of rare organisms such as Corynebacterium diphtheriae. For detection of these and other uncommon organisms, the laboratory must be specifically in-formed of their possible presence by the physician. Appropriate media and special proce-dures can then be included.

Once growth is detected in any medium, the process of identification begins. Identifica-tion involves the use of methods to obtain pure cultures from single colonies, followed by tests designed to characterize and identify the isolate. The exact tests and their se-quences vary with different groups of organisms, and the taxonomic level (genus, species, subspecies, and so on) of identification needed varies according to the medical usefulness of the information. In some cases, only a general description or the exclusion of particular organisms is important. For example, a report of “mixed oral flora” in a sputum specimen or “no N. gonorrhoeae” in a cervical specimen may provide all of the information needed.

CULTURAL CHARACTERISTICSCultural characteristics include the demonstration ofproperties such as unique nutritional requirements, pigment production, and the ability to grow in the presence of certain substances (sodium chloride, bile) or on certain media (MacConkey, nutrient agar). Demonstration of the ability to grow at a particular temperature or to cause hemolysis on blood agar plates is also used.

BIOCHEMICAL CHARACTERISTICS The ability to attack various substrates or to produce particular metabolic products has broad application to the identification of bacteria.  Biochemical and cultural tests for bacterial identification are analyzed by reference to tables that show the reaction patterns characteristic for individual species. In fact, advances in computer analysis have now been applied to identification of many bacterial and fungal groups. These systems use the same biochemical principles along with computerized databases to determine the most probable identification from the observed test pattern.

TOXIN PRODUCTION AND PATHOGENICITYDirect evidence of virulence in laboratoryanimals is rarely needed to confirm a clinical diagnosis. In some diseases caused by production of a specific toxin, the toxin may be detected in vitro through cell cultures or immunologic methods. Neutralization of the toxic effect with specific antitoxin is the usual approach to identify the toxin.

ANTIGENIC STRUCTURE As discussed, bacteria possess many antigens,such as capsular polysaccharides, flagellar proteins, and several cell wall components. Serology involves the use of antibodies of known specificity to detect antigens present on whole bacteria or free in bacterial extracts (soluble antigens). The methods used for demonstrating antigen – antibody reactions are discussed in a later section.

GENOMIC STRUCTURENucleic acid sequence relatedness as determined by homologycomparisons have become a primary determinant of taxonomic decisions. They are discussed later in the section on nucleic acid methods.