Of the infectious agents discussed in this book, only some of the parasites are large enough to be seen with the naked eye.

Of the infectious agents discussed in this book, only some of the parasites are large enough to be seen with the naked eye. Bacteria can be seen clearly with the light micro-scope when appropriate methods are used; individual viruses can be seen only with the electron microscope, although aggregates of viral particles in cells (viral inclusions) may be seen by light microscopy. Various stains are used to visualize and differentiate mi-croorganisms in smears and histologic sections.

Direct examination of stained or unstained preparations by light (bright field) mi-croscopy (Fig 15 – 2A) is particularly useful for detection of bacteria. Even the smallestbacteria (0.15μm wide) can be visualized, although some require special lighting tech-niques. As the resolution limit of the light microscope is near 0.2 m, the optics must be ideal if organisms are to be seen clearly by direct microscopy. These conditions may be achieved with a 100 oil immersion objective, a 5 to 10 eyepiece, and optimal lighting. 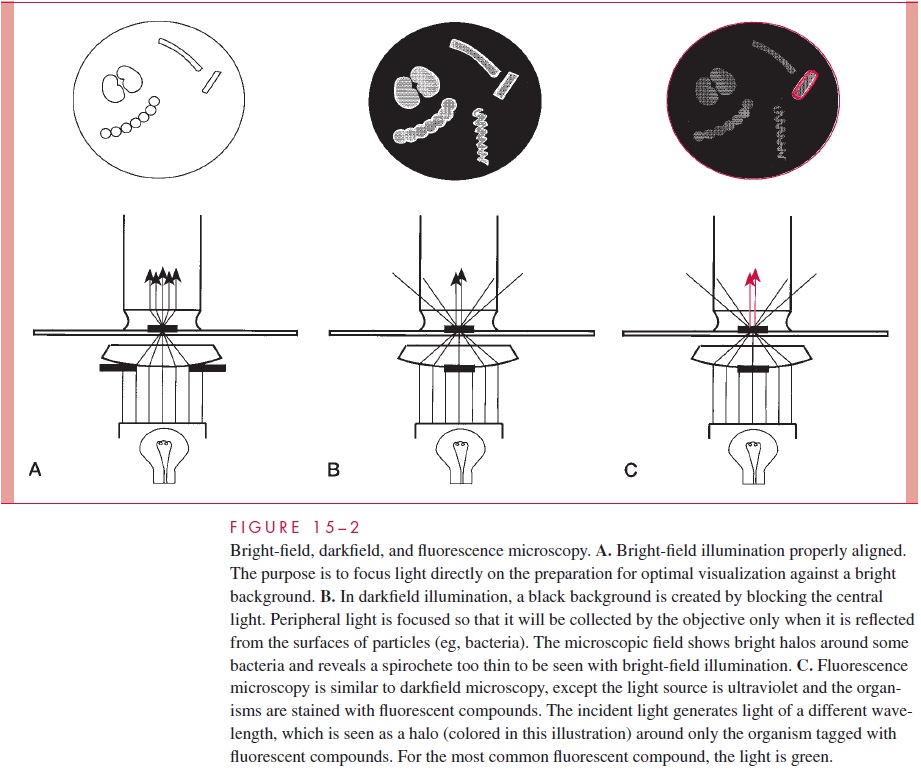 Unstained bacteria are too transparent to see directly, although their presence can be indi-cated by the voids they create when suspended in particulate matter such as India ink.

Bacteria may be stained by a wide variety of dyes, including methylene blue, crystal violet, carbol-fuchsin (red), and safranin (red). The two most important methods, the Gram and acid-fast techniques, employ staining, decolorization, and counterstaining in a manner that helps to classify as well as stain the organism.

The differential staining procedure described in 1884 by the Danish physician Hans Christian Gram has proved one of the most useful in microbiology and medicine. The procedure (Fig 15 – 3) involves the application of a solution of iodine in potassium iodide to cells previously stained with an acridine dye such as crystal violet. This treatment produces a mordanting action in which purple insoluble complexes are formed with ri-bonuclear protein in the cell. The difference between Gram-positive and Gram-negative bacteria is in the permeability of the cell wall to these complexes on treatment with mix-tures of acetone and alcohol solvents. This extracts the purple iodine – dye complexes from Gram-negative cells, whereas Gram-positive bacteria retain them. An intact cell wall is necessary for a positive reaction, and Gram-positive bacteria may fail to retain the stain if the organisms are old, dead, or damaged by antimicrobial agents. No similar conditions cause a Gram-negative organism to appear Gram positive. The stain is completed by the addition of red counterstain such as safranin, which is taken up by bacteria that have been decolorized. Thus, cells stained purple are Gram positive, and those stained red are Gram negative. As indicated, Gram positivity and negativity correspond to major structural differences in the cell wall. 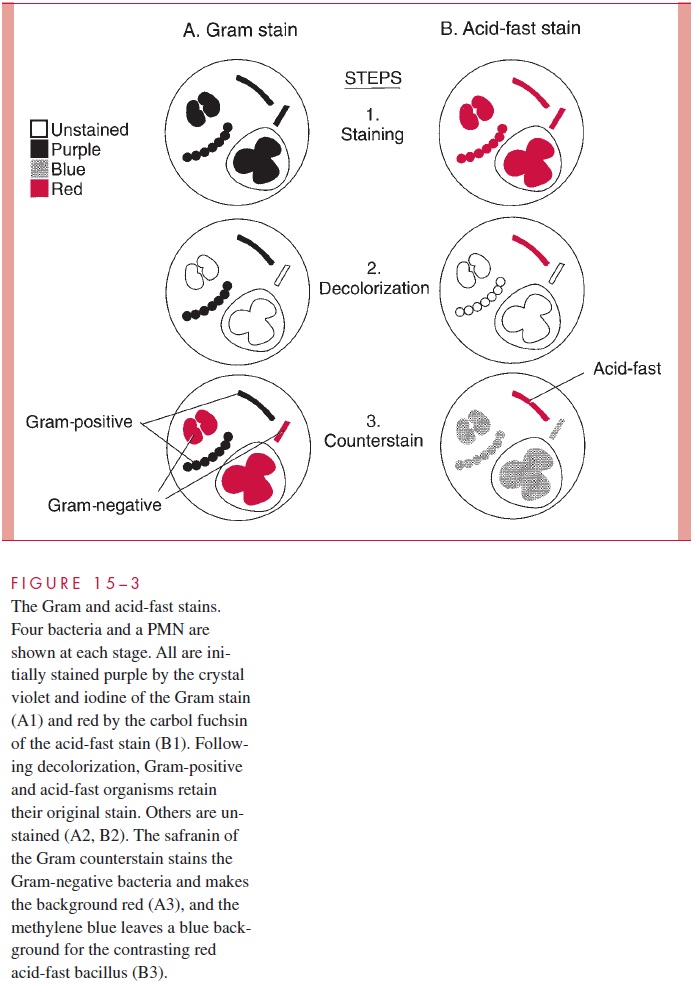 When the Gram stain is applied to clinical specimens, the purple or red bacteria are seen against a Gram-negative (red) background of leukocytes, exudate, and debris. Re-tention of the purple dye in tissue or fluid elements, such as the nuclei of polymorphonu-clear leukocytes, is an indication that the smear has been inadequately decolorized. In smears of uneven thickness, judgments on the Gram reaction can be made only in well-decolorized areas.

In many bacterial infections, the etiologic agents are readily seen on stained Gram smears of pus or fluids. This information, combined with the clinical findings, may guide the management of infection before culture results are available. Interpretation requires considerable experience and knowledge of probable causes, of their morphology and Gram reaction, and of any organisms normally present in health at the infected site.

Acid fastness is a property of the mycobacteria (eg, Mycobacterium tuberculosis) and re-lated organisms. Acid-fast organisms generally stain very poorly with dyes, including those used in the Gram stain. However, they can be stained by prolonged application of more concentrated dyes, and staining is facilitated by heat treatment. Their unique feature is that once stained, acid-fast bacteria resist decolorization by concentrations of mineral acids and ethanol that remove the same dyes from other bacteria. This combination of weak initial staining and strong retention once stained is probably related to the high lipid content of the mycobacterial cell wall. Acid-fast stains are completed with a counterstain to provide a contrasting background for viewing the stained bacteria (see Fig 15 – 3).

In the acid-fast procedure, the slide is flooded with carbol-fuchsin (red) and decol-orized with hydrochloric acid in alcohol. When counterstained with methylene blue, acid-fast organisms appear red against a blue background. A variant is the fluorochromestain, which uses a fluorescent dye, (auramine, or an auramine – rhodamine mixture) fol-lowed by decolorization with acid – alcohol. Acid-fast organisms retain the fluorescent stain, which allows their visualization by fluorescence microscopy.

Some bacteria, such as Treponema pallidum, the cause of syphilis, are too thin to be visu-alized with the usual bright-field illumination. They can be seen by use of the dark-field technique. With this method, a condenser focuses light diagonally on the specimen in such a way that only light reflected from particulate matter such as bacteria reaches the eyepiece (Fig 15 – 2B). The angles of incident and reflected light are such that the organ-isms are surrounded by a bright halo against a black background. This type of illumina-tion is also used in other microscopic techniques, in which a high light contrast is desired, and for observation of fluorescence. Fluorescent compounds, when excited by incident light of one wavelength, emit light of a longer wavelength and thus a different color. When the fluorescent compound is conjugated with an antibody as a probe for detection of a specific antigen, the technique is called immunofluorescence, or fluorescent anti-body microscopy. The appearance is the same as in darkfield microscopy except that the halo is the emitted color of the fluorescent compound (Fig 15 – 2C). For improved safety, most modern fluorescence microscopy systems direct the incident light through the objec-tive from above (epifluorescence).

Electron microscopy demonstrates structures by transmission of an electron beam and has 10 to 1000 times the resolving power of light microscopic methods. For practical reasons its diagnostic application is limited to virology, where due to the resolution possible at high magnification it offers results not possible by any other method. Using negative staining techniques, direct examination of fluids and tissues from affected body sites en-ables visualization of viral particles. In some instances, electron microscopy has been the primary means of discovery of viruses that do not grow in the usual cell culture systems.