Cellular network or mobile network is a radio network scattered over land areas called cells. A cell is coverage of base station connected to other stations via wire or fiber or wirelessly through switching centre

Cellular network or mobile network is a radio network scattered over land areas called cells. A cell is coverage of base station connected to other stations via wire or fiber or wirelessly through switching centre. Cellular network employ

Base station: Each cell is served by at least one fixed-location transceiver, known as a cell site or base station. It contains a radio transceiver and controller and provides radio communication to mobile units located in cell.

If the cell size is preferred as circle, then a overlap and gap occurs. The cell which gives the actual radio coverage is called footprint of a cell. It might so happen that either there may be an overlap between any two such side by side circles or there might be a gap between the coverage areas of two adjacent circles. In a cellular radio system, a land region to be supplied with radio service is divided into regular shaped cells, even though hexagonal cells are conventional. A regular shape for cellular design over a territory which can be served by 3 regular Polygons, namely, equilateral triangle, square and regular hexagon, which can cover the entire area without any overlap and gaps.

Along with its regularity, a cell must be designed such that it is most reliable too, i.e., it supports even the weakest mobile with occurs at the edges of the cell. For any distance between the center and the farthest point in the cell from it, a regular hexagon covers the maximum area. In a cellular network, each cell uses a dissimilar set of frequencies from neighboring cells, to avoid interference and provide assured bandwidth within each cell. 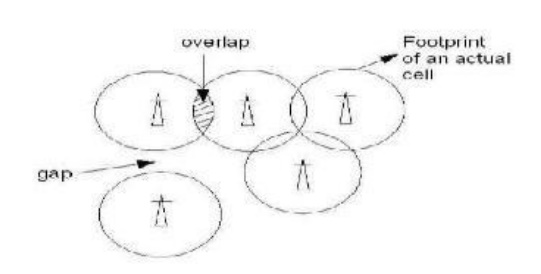 Cell radius differs from tens of meters in buildings, and hundreds of meters in cities, up to tens of kilometers in the landscape. The set of frequencies can be reused in other cells, provided that the same frequencies are not reused in adjacent nearby cells as that would cause co-channel interference.