GSM was formally known as Groupe Speciale Mobile (found in1982) and now it is abbreviated as Global System for mobile communications. It is a standard set developed by the European Telecommunications Standards Institute (ETSI) to describe protocols for second generation (2G) digital cellular networks used by mobile phones. It became the de facto global standard for mobile communications with over 80% market share. The GSM standard was developed as a replacement for first generation (1G) analog cellular networks, and originally described a digital, circuit switched network optimized for full duplex  voice telephony. Further improvements were made when the 3GPP developed third generation (3G) UMTS standards followed by fourth generation (4G) LTE Advanced standards.

The primary goal of GSM was to provide a mobile phone system that allows user to roam throughout Europe and provides voice services compatible to ISDN and other PSTN systems. GSM has initially been deployed in Europe using 890-915MHz for uplinks and 935-960 for downlinks.

GSM Rail is used in European Countries and railroad systems.

GSM allows the integration  of voice and data services and also the internetworking with the existing network.

There are three types of services offered by GSM

A mobile station MS is connected to the GSM public land mobile network PLMN via Um interface. PLMN is the infrastructure needed for the GSM networks. This network is connected to transit networks(eg.)PSTN,ISTN,etc. There will be additional network the source/ destinations network before another terminal TE is connected.

This services uses the functions of physical layer to transmit data. Data transmission has a constant delays and throughout if no error occurs but not in real time. FEC is used to increase the transmission quality. It does not try to recover the lost data in case of handover.

Tele services are application specific and need all the 7 layers of ISO/OSI reference model. Services are specified end to end. There tele services are voice oriented tele service. They are encrypted voice transmission, message services and data communication with terminals from PSTN/ISDN.

There are some important services:

·        Emergency Number: Mandatory service for all service providers. Its of free of charge. This connection has the highest priority with pre-emption.

·        Short Message Service: It is used fro simple message transfer with the maximum of 160 characters. SMS does not use the standard data channels of GSM uses the signaling channels. Sending andg receiving SMS is possible during the data/ voice transmission.

·        Enhanced Message Service : It is used for large message size with 760 characters, animated pictures, small images can be transmitted.

The architecture of GSM comes in hierarchy, consisting of many entities, interfaces and subsystems.

The customer is able to notice few components of the network viz. Mobile Station and Antenna of the Base Transceiver Station(BTS). Remaining entities are not visible.

As the name implies, the radio subsystem (RSS) comprises all radio specific entities. i.e. the mobile stations(MS) and the base station subsystem(BSS). 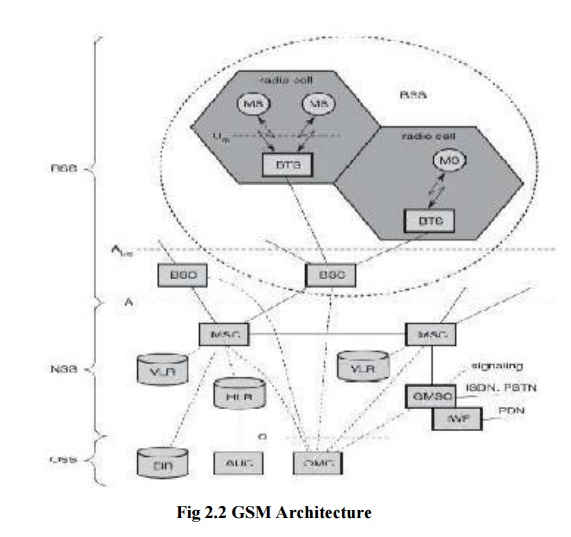 As they are in same frequency they form a cell . The components of RSS are

BTS contains the equipment for transmitting and receiving of radio signals,antennas and equipment for encrypting and decrypting communications with the Base station controller(BSC). A BTS is controlled by apparent BSC via the base station control function(BSCF). The BCFis implemented as a discrete unit or even incorporated in a TRX in compact base stations. The BCF provides an operations and maintenance (O&M) connection to the Network Management System(NMS)and manage operational state of each TRX as well as soft handling and alarm collection.

The function of BTS vary depending on the cellular technology used and cellula telephone provider. There are vendors in which the BTS is a plain transceiver which receives information from MS through Um(Air Interface) and then it converts into TDM based interface, the Abis and it sends it towards the BSC. A GSM cell can measure between some 100m and 35km depending on the environment.

The base station subsystem is the section of traditional cellular telephone network which is responsible for handling traffic and signaling between a mobile phone and the network switching subsystem. The BSS carries out transcoding of speech channels, allocation of radio channels to mobile phones, paging, quality management of transmission and reception over the Air interface and many other tasks related to the radio network.

The BSC basically manages the BTSs. It reverses radio frequencies and handles the handover from one BTS to another within BSS, and performs paging of the MS. The BSC also multiplexes the radio channels onto the fixed network connections at A interface.

b) NETWORK AND SWITCHING SUBSYSTEM:

This network and switching subsystem is the heart of GSM. Their function are to connect wireless network with standard public network, performs handover between different BSS, localization (to locate the mobile station),Charging, Accounting and roaming of users.The NSS contains the following switches and databases.

MSC are digital ISDN switches. It establishes connection qith other MSC and BSC via A interfacet Gateway MSC connects to fixed networks(eg.) PSTN, ISDN. With the help of Internet Working Functions, MSC can connect to public data Network PDN. It handles all signaling needed for connection setup, connection release and handover.

It is a current location area(LA) of MS. It consist of Mobile subscriber roaming number (MSRN), VLR and MSC in it. When MS leaves the current LA, then the information is updated in HLR. The Usage of the information is to locate the user.

The third part of a GSM system is operation subsystem (OSS) which contains the necessary functions for network operation and maintenance. The OSS possesses network entities of its own and accesses other entities via SS7 signaling. The following entities have been defined:

The OMC monitors and controls all other network entities via the O interface (SS7 with X.25). Typical OMC management functions are traffic monitoring, status reports of network entities, subscriber and security management, or accounting and billing. OMCs use the concept of telecommunication management network (TMN) as standardized by the ITU-T. Authentication centre (AuC): As the radio interface and mobile stations are particularly vulnerable, a separate AuC has been defined to protect user identity and data transmission. The AuC contains the algorithms for authentication as well as the keys for encryption and generates the values needed for user authentication in the HLR.

The EIR is a database for all IMEIs, i.e., it stores all device identifications registered for this network. As MSs are mobile, they can be easily stolen. With a valid SIM, anyone could use the stolen MS. The EIR has a blacklist of stolen (or locked) devices. In theory an MS is useless as soon as the owner has reported a theft. Unfortunately, the blacklists of different providers are not usually synchronized and the illegal use of a device in another operator‟s network is possible (the reader may speculate as to why this is the case). The EIR also contains a list of valid IMEIs (white list), and a list of malfunctioning devices (gray list).