Cellular network organization uses low power transmitter(100W or less).The areas are divided into cells. Each cell is served by its own antenna and a base station consisting of transmitter, receiver, and control unit.

Cellular network organization uses low power transmitter(100W or less).The areas are divided into cells. Each cell is served by its own antenna and a base station consisting of transmitter, receiver, and control unit.

There are three basic devices they are:

Base station include an antenna, a controller, and a number of receivers.

Base station is at center of each cell. Base station is connected to MTSO. One MTSO serve as multiple Base station. The link between MTSO to BS is by wire or wireless.MTSO connects calls between mobile units and from mobile to fixed telecommunications network .It assigns voice channel and performs handoffs and monitors calls (billing).

Two channels are available between mobile unit and BS, they are:

1.     Control channel: They are used to exchange information and perform setup and maintaining calls. It establishes a relationship between Mobile unit and nearest BS.

2.     Traffic channel: It carries voice or data connection between users.

Public Land Mobile Network (PLMN) refer to a cellular network that has land and radio based sections.

This network consist of:

·        Mobile station (MS) is a device used for communication over the network. 

·        Base station transceiver (BST) is atransmitter/receiver that are used to transmit/receive signals over the network.

·        Mobile switching center (MSC) is used to Sets up and maintain calls made over the network.

·        Public switched telephone network (PSTN) Consist of Section of the network that is land base.

1.     Mobile unit initialization scans and choose strongest set up control channel and automatically pick up a BS antenna of cell. Handshake is used to spot user and register location. Scan is recurring to allow for movement of change of cell.

2.     Mobile originated call check if the set up channel is free and Send number on pre-selected channel.

3.     In Paging MTSO attempts to connect to mobile unit. Depending on called mobile number the paging message will be sent to BSs. By using the setup channel Paging signal is transmitted.

4.     In call accepted, the Mobile unit recognizes the number on the set up channel and responds to BS which in turn send response to MTSO. Then the MTSO sets up a circuit between calling and called BSs and select a available traffic channel within cells and notifies BSs. The BSs notify mobile unit of channel.

5.     In Ongoing call the Voice/data is exchanged through respective BSs and MTSO.

6.     If the signal strength decreases as the mobile moves out of range from BTS it is called handoff. And the traffic channel changes to the one assigned to new BS.

1.     Call blocking: On mobile-initiated call stage, if all the traffic channels are busy, the mobile tries again and again. After numeral retries, a busy tone will be returned.

2.     Call termination: The User will hang up, MTSO is informed and the traffic channels at two BSs are released.

3.     Call drop: If the BS cannot maintain a required signal strength then call drop will occur and the traffic channel is dropped and MTSO informed.

4.     Calls to/from fixed and remote mobile subscriber: Here the MTSO connects to PSTN and can connect to mobile user and fixed subscriber via PSTN. MTSO can also connect to remote MTSO via PSTN or via dedicated line.

Mobile Radio Propagation Effects: Signal strength between BS and mobile unit is strong enough to maintain signal quality at the receiver. Signal propagation effects may interrupt the signal and causes error. This is called fading.

Design issues making it advantageous to include dynamic power control in cellular systems.For effective communication, the power received must be sufficiently above the background noise. It is advantageous to minimize the power in the transmitted signal from the mobile. Thus it reduce co-channel interference, save battery power and alleviate health concern.Types of power control: 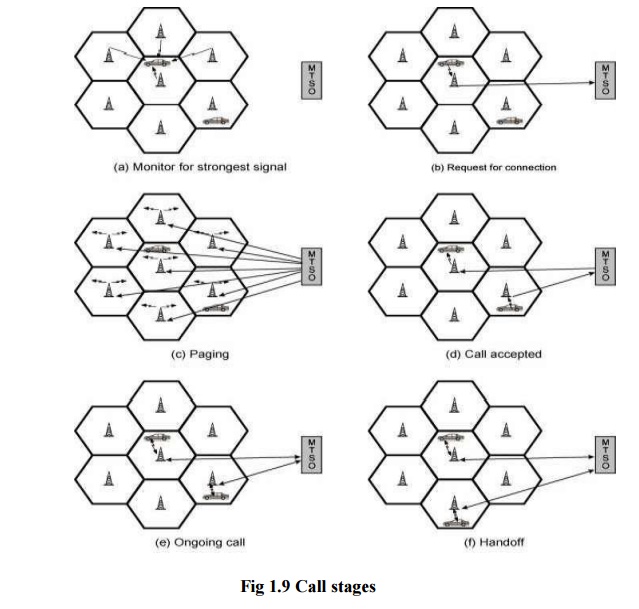 It depends solely on mobile unit. There is no feedback from BS. Open loop is not as accurate as closed loop, but it can react quicker to fluctuate in signal strength.

Based on performance  metric the signal  strength is adjusted in reverse channel.BS makes power tuning decision and communication to mobile on control channel.

Load accessible to a system:

A -average number of calls arriving during average holding period, for normalized