The radio spectrum contains many bands that are allocated and used for commercial, personal, and military applications.

The radio spectrum contains many bands that are allocated and used for commercial, personal, and military applications. Fifty (50) MHz of spectrum allocated to cellular networks exists in the 824-849 MHz and the 869-894 MHz bands (Pagett, 1995). These bands are then further subdivided into 832 channels allowing many users in the same area to simultaneously access the network. Types of cellular network access are:

Cells are combined together to form clusters. There are 2 types of formation of clusters 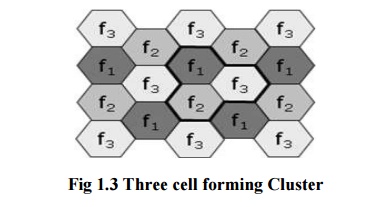 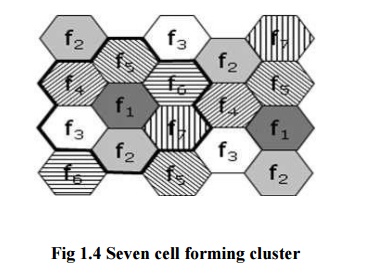 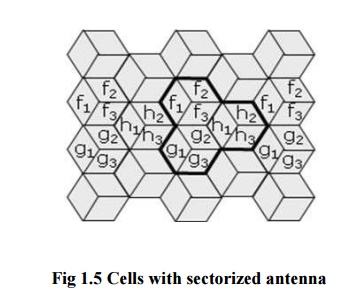 Sectorized antenna is an another method to reduce the interference.

If certain frequency are assigned to certain cells then it is called fixed channel allocation (FCA). In fixed channel assignment strategy each cell is allocated a fixed number of voice channels. The problem related is dissimilar traffic load occurs in dissimilar cell.

If the frequency is borrowed and assigned to cells then it is called dynamic channel allocation(DCA). In dynamic channel assignment strategy channels are temporarily assigned for use in cells for the duration of the call. As the frequencies are recurring, the transmission power is restricted to stay away from interference with subsequent cell using the same frequency.

If the cell has heavy traffic and its neighboring cell has less load then the frequencies can be borrowed and assigned to the cell having heavy load. This is called borrowing channel allocation(BCA).The idea of breathe is that the cell can cover bulky area under light load and its size shrink under heavy load.CDM system faces a problem of cell size depending upon load.

Handoff is an important task in cellular network. when a MS moves into another cell, while the conversation is still in progress, the MSC automatically transfers the call to a new FDD channel without disturbing the conversation. This process is called as handoff.

 The probability of a new call being blocked is referred as call blocking Probability.

 The probability that the call is ended due to handoff is the call dropping probability.

 The probability that a admitted call is not dropped before ended is the call completion probability.

 The probability that a handoff is executed while the response conditions are inadequate is referred as Probability of unsuccessful handoff.

 The probability that a handoff cannot be effectively completed is the handoff blocking probability.

 The probability that a handoff occur earlier than call termination is the handoff probability.

       The number of handoffs per unit time is referred as rate of handoff.

       The duration of moment during a handoff in which a mobile is not connected to either base station is the Interruption duration.

Frequency reuse, or, frequency planning, is a technique of reusing frequencies and channels within a communication system to improve capacity and spectral efficiency.

The characteristic of a cellular network is the ability to re-use frequencies to increase both coverage and capacity. Adjacent cells must use different frequencies to avoid interference, however there is no difficult with two cells sufficiently far apart in use on the same frequency. 10 to 50 frequencies are assigned to each cell. The elements that determine frequency reuse are the reuse distance and the reuse factor. The reuse distance, D is calculated as

N- number of cells per cluster.

The rate at which the same frequency can be used in the network is called frequency reuse factor. It is 1/K

K - Number of cells which cannot use the same frequencies for transmission. 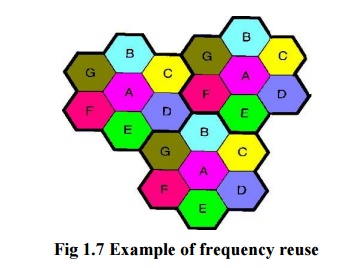