GSM offers several security services using confidential information stored in the AuC and in the individual SIM (which is plugged into an arbitrary MS).

GSM offers several security services using confidential information stored in the AuC and in the individual SIM (which is plugged into an arbitrary MS). The SIM stores personal, secret data and is protected with a PIN against unauthorized use. (For example, the secret key Ki used for authentication and encryption procedures is stored in the SIM.) The security services offered by GSM are explained below:

●  CONFIDENTIALITY: All user-related data is encrypted. After authentication, BTS and MS apply encryption to voice, data, and signaling. This confidentiality exists only between MS and BTS, but it does not exist end-to-end or within the whole fixed GSM/telephone network.

●     ANONYMITY: To provide user anonymity, all data is encrypted before transmission, and user identifiers (which would reveal an identity) are not used over the air. Instead, GSM transmits a temporary identifier (TMSI), which is newly assigned by the VLR after each location update. Additionally, the VLR can change the TMSI at any time. Three algorithms have been specified to provide security services in GSM. Algorithm A3 is used for authentication, A5 for encryption, and A8 for the generation of a cipher key. In the GSM standard only algorithm A5 was publicly available, whereas A3 and A8 were secret, but standardized with open interfaces. Both A3 and A8 are no longer secret, but were published on the internet in 1998. This demonstrates that security by obscurity does not really work. As it turned out, the algorithms are not very strong. However, network providers can use stronger algorithms for authentication – or users can apply stronger end-to-end encryption. Algorithms A3 and A8 (or their replacements) are located on the SIM and in the AuC and can be proprietary. Only A5 which is implemented in the devices has to be identical for all providers.

Before a subscriber can use any service from the GSM network, he or she must be authenticated. Authentication is based on the SIM, which stores the individual authentication key Ki, the user identification IMSI, and the algorithm used for authentication A3. Authentication uses a challenge-response method: the access control AC generates a random number RAND as challenge, and the SIM within the MS answers with SRES (signed response) as response. The AuC performs the basic generation of random values RAND, signed responses SRES, and cipher keys Kc for each IMSI, and then forwards this information to the HLR. The current VLR requests the appropriate values for RAND, SRES, and Kc from the HLR. 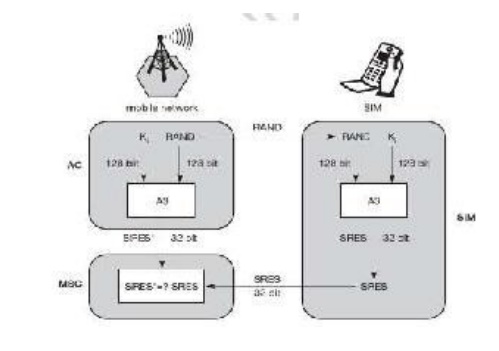 To ensure privacy, all messages containing user-related information are encrypted in GSM over the air interface. After authentication, MS and BSS can start using encryption by applying the cipher key Kc (the precise location of security functions for encryption, BTS and/or BSC are vendor dependent). Kc is generated using the individual key Ki and a random value by applying the algorithm A8. Note that the SIM in the MS and the network both calculate the same Kc based on the random value RAND. The key Kc itself is not transmitted over the air interface. 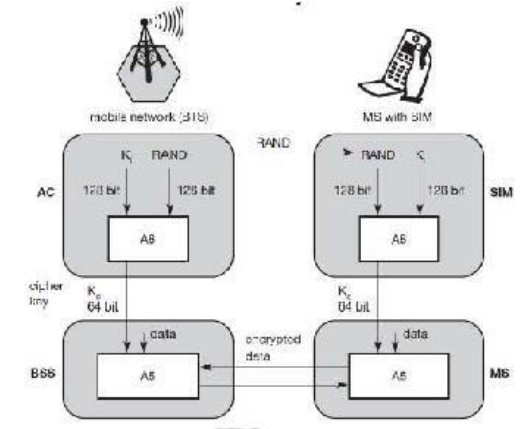 MS and BTS can now encrypt and decrypt data using the algorithm A5 and the cipher key Kc. As Figure shows, Kc should be a 64 bit key which is not very strong, but is at least a good protection against simple eavesdropping. However, the publication of A3 and A8 on the internet showed that in certain implementations 10 of the 64 bits are always set to 0, so that the real length of the key is thus only 54 consequently, the encryption is much weaker.