GPRS usage is typically charged based on volume of data transferred, contrasting with circuit switched data, which is usually billed per minute of connection time. 5 GB per month for a fixed fee or on a pay-as-you-use basis. Usage above the bundle cap is either charged per megabyte or disallowed.

GPRS is a best effort service, implying variable throughput and latency that depend on the number of other users sharing the service concurrently, as opposed to circuit switching, where a certain quality of service (QoS) is guaranteed during the connection. In 2G systems, GPRS provides data rates of 56–114 kbit/second. 2G cellular technology combined with GPRS is sometimes described as 2.5G, that is, a technology between the second (2G) and third (3G) generations of mobile telephony. It provides moderate-speed data transfer, by using unused time division multiple access (TDMA) channels in, for example, the GSM system. GPRS is integrated into GSM Release 97 and newer releases.

In PTP versions are PTP Connection oriented Network service (PTP-CONS), which establish a logical relation in between users. Multiple packets are sent between single source and a single destination. Other version is the PTP Connectionless Network Service (PTP-CLNS), which does not require a logical link between users. Packets are sent between a single source and a single destination. Each packet is independent of its predecessor and successor.

QoS-profile can be specified by the users of the GPRS. It is maintained in the PDP context. PDP Context is nothing but which is created in each communication session. QoS-profile is used to indicate the network and radio resources required for data transmission. It has the attributes such as service precedence (high,normal,low),reliability class, delay class, peak throughput class, mean throughput class. GPRS must allocate radio resources to fulfill these user specifications. GPRS network is suffered by the following delays such as channel access delay, coding for error correction and transfer delay in the fixed part and wireless part of the network. GPRS also includes several security services namely authentication, user identity confidentiality, access control and user information confidentiality.

Resources are reserved only when needed and charged accordingly. Connection setup times are reduced. It will enable new service opportunities. It has High Speed (Data Rate 14.4 – 115 kbps). It uses the efficient radio bandwidth (Statistical Multiplexing).Circuit switching & Packet Switching can be used in parallel. It has Constant connectivity.

It can be connected to GPRS service and GSM service (voice, SMS), using both at the same time. Such devices are known to be available today.

They are connected to either GPRS service or GSM service (voice, SMS). Must be switched manually between one or the other service.

In order to understand the GPRS network architecture, some fundamental GSM terminology is necessary. This section describes some of the main components of the GSM network.

GPRS architecture has two network elements, which are called as GPRS support nodes (GSN).They are,

All GSNs are integrated into the standard GSM architecture and many interfaces (see figure 1). The network elements are gateway GPRS support node (GGSN) is provisioned by router, which supports traditional gateway functionality. It is the interworking unit between the GPRS network and external packet data networks (PDN). This node contains routing information for GPRS users. It performs address conversion and tunnels data to a user via encapsulation. 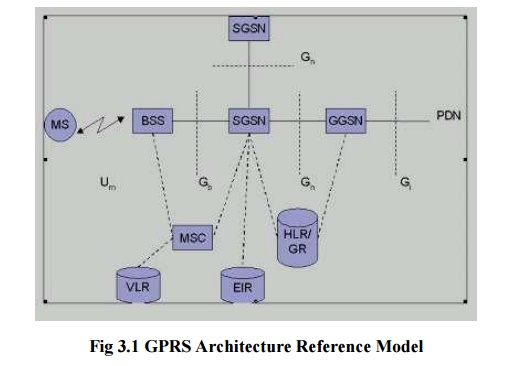 The other element is the serving GPRS support node (SGSN) which connects BSS and GGSN. It supports the MS via the Gb interface. It requests the user address from the GPRS register (GR). It keeps track of the individual MSs‘ location, is in charge for collecting billing information. It performs many security functions.

The PCU separates the circuit switched and packet switched traffic from the user and sends them to the GSM and GPRS networks respectively. It also performs most of the radio resource management functions of the GPRS network. The PCU can be either located in the BTS, BSC, or some other point between the MS and the MSC. There will be at least one PCU that serves a cell in which GPRS services will be available. Frame Relay technology is being used at present to interconnect the PCU to the GPRS core.

Um between an MS and the GPRS fixed network part. The Um is the access interface the MS uses to access the GPRS network. The radio interface to the BTS is the same interface used by the existing GSM network with some GPRS specific changes.

Gb between a SGSN and a BSS. The Gb interface carries the GPRS traffic and signaling between the GSM radio network (BSS) and the GPRS network. Frame Relay based network services is used for this interface.

Gn between two GSNs within the same PLMN. The Gn provides a data and signalling interface in the Intra -PLMN backbone. The GPRS Tunnelling Protocol (GTP) is used in the Gn (and in the Gp) interface over the IP based backbone network.

A GSM subscriber needs a terminal called Mobile Station (MS). It is used to

connect to the network using the radio interface Um. In idle mode an MS is not reachable and all contexts will be deleted. In the standby state there is only movement across routing areas which is updated to the SGSN. Before sending any data over the GPRS network, an MS must attach to it, following the procedures of the mobility management. The attachment procedure includes assigning a temporal identifier, called a temporary logical link identity (TLLI), and a ciphering key sequence number (CKSN) for data encryption.

BTS which provides new GPRS channel coding schemes through Channel Codec Unit (CCU). The BTS handles the radio interface to the MS. It consists of radio equipment (transceivers and antennas) required to service each cell in the network.

BSC forwards the Circuit-switched calls to MSC and the Packet-switched data to SGSN. The BSC provides the control functions and physical links between the MSC and the BTS. A number of BSCs are served by one MSC while several BTSs can be controlled by one BSC.

The NSS is responsible for call control, service control and subscriber mobility manage

MSC is in charge for telephony switching functions of the network. It also performs authentication to verify the user‘s identity. It ensures the confidentiality of the calls. The Authentication Center (AuC) provides the necessary parameters to the MSC to perform the authentication procedure. The AuC is shown as a separate logical entity but is generally integrated with the HLR. The Equipment Identity Register (EIR) is on the other hand a database that contains information about the identity of the mobile equipment. It prevents calls from unauthorized or stolen MSs.

HLR is a database used to store and manage permanent data of subscribers. HLR is used to map an MS to one or more GGSNs. It is used to update the SGSN of the MS. It is also used to store the fixed IP address and QoS profile for a transmission path.

VLR is a database used to store temporary information about the subscribers. It is needed by the MSC in order to service visiting subscribers. The MSC and VLR are commonly integrated into one single physical node and the term MSC/VLR is used instead. When a subscriber enters a new MSC area, a copy of all the ne) cessary information is downloaded from the HLR into the VLR. The VLR keeps this information so that calls of the subscriber can be processed without having to interrogate the HLR (which can be in another PLMN) each time. The temporary information is cleared when the mobile station roams out of the service area.

EIR is also a database that encloses information about the identity of the mobile equipment. It prevents calls from unauthorized or stolen MSs.

A MS in the idle state is not traceable and can only receive PTM-M transmissions such as general broadcast events destined to a specific geographical area. The MS needs to perform the attach procedure in order to connect to the GPRS network and become reachable.

Data is sent or received in this state. The MS informs the SGSN when it changes cells. The MS may explicitly request (or can be forced by the network) to detach in which case it moves to Idle. A timer monitors the Ready state and upon its expiry, the MS is put on Standby. The timer insures that resources are not wasted by an inactive MS.

A connected MS which is inactive is put in the Standby state. Moving back to Ready can be triggered by sending data or signalling information from the MS to the SGSN. Upon arrival of data destined to the MS, the SGSN pages the latter and a response to the page moves the MS back to the Ready state. The MS may wish (or can be forced by the network) to terminate the connection by requesting to detach in which case it returns to Idle. A timer is used by the SGSN to monitor the tracking of the MS, and when it expires, the MS is detached and is considered unreachable 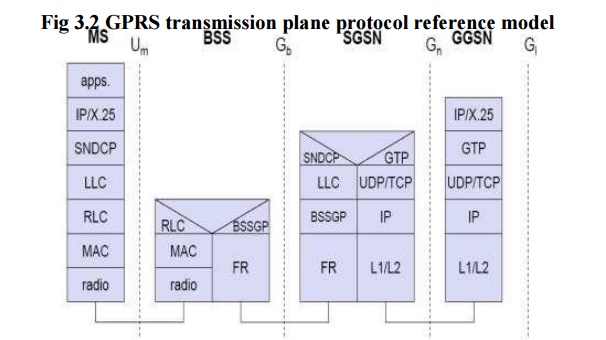 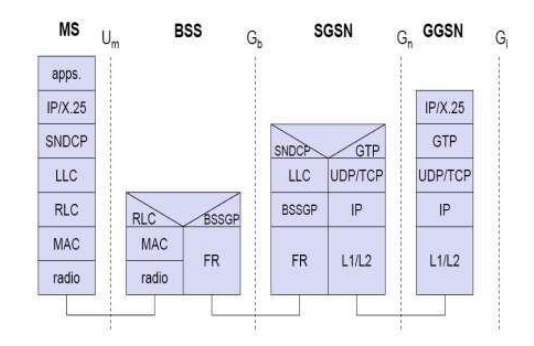 Transmission protocols in the Um interface

The physical layer can be divided into the Radio Frequency (RF) layer and the Physical Link layer.

The Radio Frequency (RF) is the normal GSM physical radio layer. Among other things the RF layer specifies the carrier frequency characteristics and GSM radio channel structures. It uses the radio modulation scheme for the data. The GSM RF physical layer is used for GPRS with the possibility for future modifications.

The Physical Link layer supports multiple MSs sharing a single physical channel and provides communication between the MSs and the network. Network controlled handovers are not used in the GPRS service. Instead, routing area updates and cell updates are used.

MAC protocol handles the channel allocation and the multiplexing. The RLC and the MAC together form the OSI Layer 2 protocol for the Um interface. The

radio interface at Um need GPRS which does not require changes compared to GSM.

RLC protocol establishes a reliable radio link to the upper layers. It also works either in acknowledged or unacknowledged modes.

LLC layer establishes a secure and reliable logical link between the MS and the SGSN for upper layer protocols. It works either in acknowledged or unacknowledged modes. The data confidentiality is ensured by using ciphering functions.

SNDCP is used to transfer data packets between SGSN and MS. It is used to provide multiplexing of several connections of network layer onto one logical connection of underlying LLC layer. It provides functions that help to improve channel efficiency. This is achieved by means of compression techniques. Data Link layer is divided into LLC layer and RLC/MAC Layer.

Several physical layer configurations and protocols are possible at the Gb interface and the physical resources are allocated by Operation & Maintenance (O&M) procedures. Normally a G703/704 2Mbit/s connection is provided.

BSSGP is used to deliver routing and QoS-related information between the BSS and SGSN. It is to enable two physically distinct nodes, the SGSN and BSS. It is to operate node management control functions. There is a one-to-one relationship between the BSSGP protocol in the SGSN and in the BSS. If one SGSN handles multiple BSSs, the SGSN has to have one BSSGP protocol device for each BSS. BSSGP does not perform error correction and works on top of a frame relay (FR) network.

Transmission protocols in the Gn interface

The L1 and the L2 protocols are vendor dependent OSI layer 1 and 2 protocols. It carries the IP datagrams for the GPRS backbone network between the SGSN and the GGSN.

GTP is the basis for tunnel signaling. It uses two transport protocols such as reliable TCP and non-reliable UDP. The GPRS Tunnelling Protocol (GTP) allows multi-protocol packets to be tunnelled through the GPRS backbone between GPRS Support Nodes (GSNs).

This unit is important for cellular telephone technique and GSM networks. and also include security related techniques and recent technology in mobile computing