Industrially Important Microbes and their Products

Microorganisms have the powerful capacity to produce numerous products, during their life cycle.

Industrially Important Microbes and their Products

Microorganisms have the powerful capacity to produce numerous products, during their life cycle. Flowchart 6.1 shows the production of valuable metabolic products during the growth of microorganisms on a suitable medium under controlled environmental conditions. Microbial products are often classified as primary and secondary metabolites. 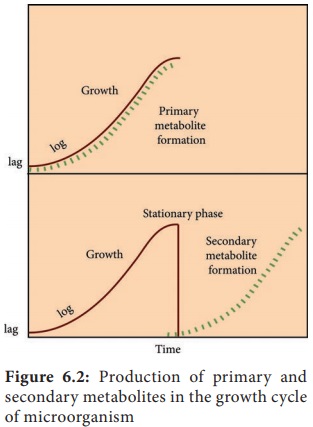 Some industrially important products are,

• modified compounds that has been microbiologically transformed, and

The nutritional yeast is called food yeast. The yeast cells are killed during ­manufacturing, and not alive in the final product. It is used in cooking; it has a cheesy, nutty or savory flavour. Yeast S. cerevisiae is used as food yeast. It is a vegan food, available in both fortified (with some vitamins) and unfortified form.

The industrial production of commercial products is carried out by fermentation process. The term fermentation is defined scientifically in a strict sense as a biological process that occurs in the absence of oxygen (anaerobic). In industrial sense any process mediated by or involving microorganisms in which a product of economic value is obtained is called fermentation. The term Industrial fermentation also means large scale cultivation of microorganisms even though most of them are aerobic.

There are many microbiological processes thatoccurinthepresenceofair(aerobically) yielding incomplete oxidation products. Examples: i) the formation of acetic acid (vinegar) from alcohol by vinegar bacteria ii) citric acid from sugar by certain molds such as Aspergillus niger. These microbial processes are often referred to as fermentations, although they do not decompose in the absence of air.

The German Eduard Buchner, winner of the 1907 Nobel Prize in chemistry, determined that fermentation was actually caused by a yeast secretion that he termed zymase. The experiment for which Buchner won the Nobel Prize consisted of producing a cell– free extract of yeast cells and showing that this “press juice” could ferment sugar. This finding dealt yet another blow to vitalism by demonstrating for the first time that fermentation could occur outside living cells.