An alcoholic distilled beverage is produced by concentrating alcohol from fermentation by distillation.

An alcoholic distilled beverage is produced by concentrating alcohol from fermentation by distillation. Beer or ale is produced by the fermentation of malted grains. Wine is prepared from grapes belonging to species Vitis vinefera. It is also produced from other fruits like peach, pear, dandelion and honey. Generally wine contains 16% of alcohol. Wine production from crushed grapes is called enology. The various forms of wine are listed below in the table 6.5. 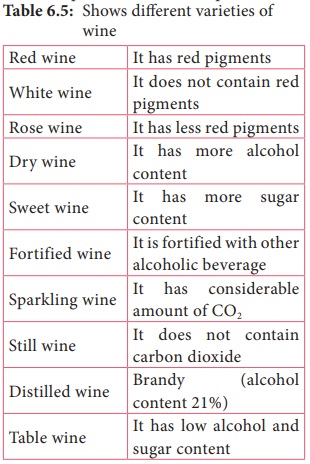 Red wine is extracted from the skin of red grapes containing red pigment (anthocyanin). During the preparation of red wine, all the anthocyanin pigments are solubilized by the extract. Pink wine is obtained from either pink grapes or red grapes in which fermentation last for only 12 to 36 hour and only less amount of anthocyanin pigments are solubilized. White wine is prepared from the white grapes or from the red grapes in which pigment involved in colouring is removed.

Generally yeasts are the natural microbiota of grapes

Both wild yeast and cultivated yeast are involved in the wine fermentation. Natural yeast is not potable because they do not produce much wine and are less alcohol tolerant and produce undesirable compounds, affecting the quality of the wine. 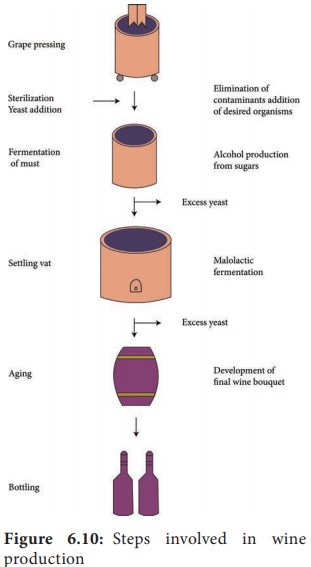 Aqu-aori is the concept­ that oceans and other bodies of water, might impart unique characteristics on the aging process of submerged wine in water. The ocean provides a unique environ-ment with cold temperatures, constant pressure, and little to no light and con-stant motion.

Grapes are stemmed, cleaned and Crushed

Must is inoculated with Saccharomyces ellipsoideus (2.5%) and selected fermentation is carried from 50 to 50000 gallons at 20 to 24°C

In red wine production, after three to five days of fermentation, sufficient tanin and colour is extracted from the pomace and the wine is drawn off for further fermentation

Racking improves flavour and aroma,where wine is separated from the sedimentcontaining yeast cells as precipitate form

The wine is subjected to aging at lower temperature. Ageing process is typically much longer for red wine than white wine

Wines are clarified in a process called fining. Fining is done by filtration through casein, tannin, diatomaceous earth or bentonite clay, asbestos, membrane filters or centrifugation

The wine produced is placed in casks, tank and bottles

After wine production, cork should be used for preventing the entry of air into the bottles. The presence of air allows the growth of vinegar bacteria that convert the ethanol to acetic acid. The final alcohol content of wine varies depending upon the sugar content of the grapes, length of the fermentation and type of strain used.