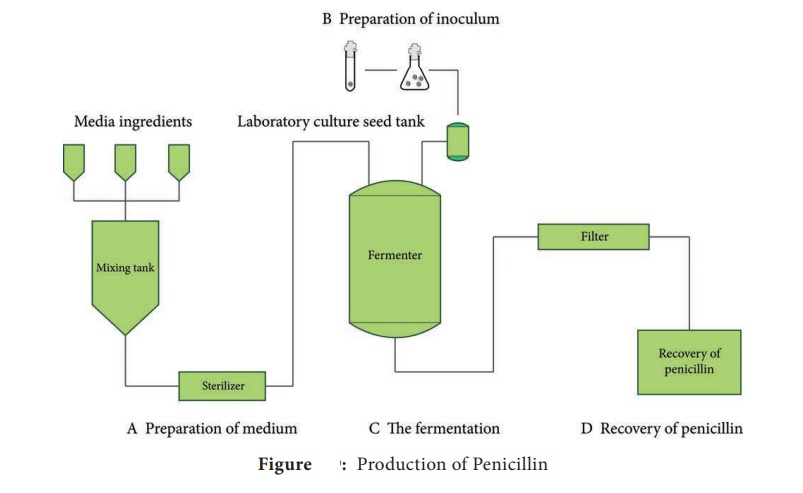 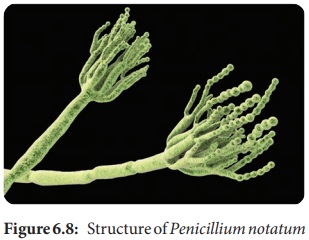 Penicillium chrysogenum is a high yielding strain, used for the commercial production of penicillin. This strain is highly unstable, so the spore suspensions are maintained in a dormant state to prevent contamination. Most penicillin form filamentous broth and hence is difficult to mix and it hinders oxygen transfer due to their high viscosity. This is avoided by using bubble columns air lift reactors which agitates the medium providing even oxygen distribution.

Penicillin has a basic structure 6-amino penicillanic acid 6-(APA). It consists of a thiazolidine ring with a condensed β-lactum ring. It carries a variable side chain in position 6. Natural penicillins are produced in a fermentation process without adding any side chain precursors. If a side chain precursor is added to the broth, desired penicillin is produced and it is called bio-synthetic penicillin.

Semi synthetic penicillin is one in which, both fermentation and chemical approach are used to produce useful pencillins. It can be taken orally and active against gram negative bacteria. (eg) Amphicilin. Nowadays, semi synthetic pencillins makeup the bulk of the penicillin market.

In later (1939) using (Flemings’ work) Howard Florey and Ernst Chain managed to purify penicillin in a powdered form. In 1941, they successfully treated a human. In 1943, they produced penicillin on a large scale. This helped immensely to treat causalities during the 2nd World War ww1 that had bacterial inflations due to their wounds.

The main objective of producing semi synthetic penicillin is to generate compounds with improved properties. (eg) acid stability, Resistance to enzymic degradation, broader spectrum of activity. Here side chain is removed to form (6 - APA) via immobilization in a column of penicillin acylase. Penicilln is converted to (6-APA) and phenyl acetic. Then it is chemically to acylated produce Semi Synthetic Pencillin.New kinds of synthetic penicillin can also be produced which are readily absorbed by the intestine compared to natural penicillin. Example: Phenithicilin.

The initial strain of Penicillium chrysogenum (NRRL, 1951) was low yielding strain and so it is was treated with mutagenic agents such as X-rays, UV right and some other repeated methods to get a high yielding strain Q-176.

Penicillin production is done by one of the following.

To inoculate fermentation medium one of the following methods can be employed.

3. Using pellet inocula obtained by the germination of spores

The lyophilized spores (or) spores in well sporulated frozen agar slant are suspended in water or in a dilute solution of a nontoxic wetting agent.

The resulting spores are then transferred to production tank

The micro organism in the inoculumtank is checked for contamination.

The production tanks are inoculatedwith a mycelial growth

Carbon source as Lactose, Nitrogen source as Ammonium sulphate, Acetate or Lactate (Corn steep liquor is the cheap and easy source of nitrogen)

First phase: Growth of mycelium occurs in this phase where the yield of antibiotic is low. The pH increases due to the release of NH3.

Second phase: In this phase, intense synthesis of penicillin occurs due to rapid consumption of Lactose and Ammonium nitrogen. The mycelial mass increases and the pH remain unchanged (Figure 6.9). 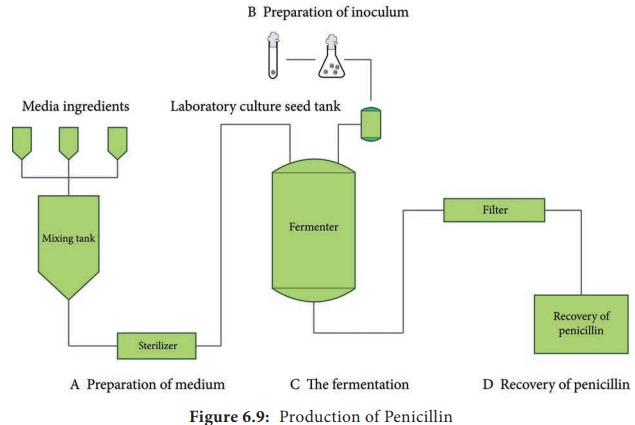 Third phase: In this phase, the concentration of antibiotics decreases in the medium. Autolysis of mycelium starts, liberating Ammonia leading to slight rise in pH.

After penicillin fermentation, the brothis filtered on rotary vacuum filte

To the broth sulphuric acid or phosphoric acid is added

Penicillin is converted into anionic form

Shifts between water and solvent aid in the purification of penicillin

The resulting sodium or potassium penicillin is then crystallized

Then it is washed, dried and used for commercial purpose