Single cell protein refers to the microbial cells or total protein extracted from pure microbial cell culture (monoculture) which can be used as protein supplement for humans or animals.

Single cell protein refers to the microbial cells or total protein extracted from pure microbial cell culture (monoculture) which can be used as protein supplement for humans or animals. During ancient times, the tribes in the Central African Republic used a spiral shaped Cyanobacterium named Spirulina platensis as food. They collected it as mats from the bottom of seasonally dried up ponds and shallow waters around Lake Chad and dried them in the sun and made small cakes called “Dihe”.

Zymology also known as “Zymurgy” (from the Greek–means, the workings of fermentation) is an applied science which studies the biochemical process of fermentation and its practical uses. It includes selection of fermenting yeast and bacteria, species and their use in brewing, wine making, fermenting milk and other fermented foods. The wine yeast Zymurgist one who studies or practices zymurgy; a knowledgeable brewer.

During the World war II, when there were shortage in proteins and vitamins in the diet, the Germans produced yeasts and a mould named Geotrichum candidum was used as food.

The term Single Cell Protein was coined by C.L Wilson (1966) at Massachusetts Institute of Technology (MIT), to represent the cells of algae, bacteria, yeasts and fungi, grown for their protein contents. The name was introduced by Prof. Scrimshow of MIT in 1967. The organisms like Pseudomonas facilis, P. flava, Chlorella, Anabaena, Spirulina, Chlamydomonas, and Agaricus are commonly used for SCP production. Large scale production of SCP is shown in the Figure 6.11. 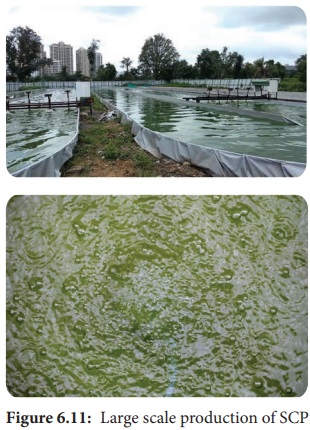 There are several methods available for SCP production. In the Japanese method, flat tray is used with artificial sunlight algae are cultivated in shallow ponds with mechanical stirrers or in deeper ponds (not more than 20–30 cm deep) with circulation pumps. Optimum, light is an important parameter for maximum growth of SCP. Scenedesmus sp. grows 20 times faster in optimum light than in natural conditions. Optimum temperature and optimum pH is varied according to the strain and intensity of light. Example: Spirulina is cultivated at 25–35ºC with pH 9.5. Table 6.6 shows different types of microorganisms and substrates used for SCP production. 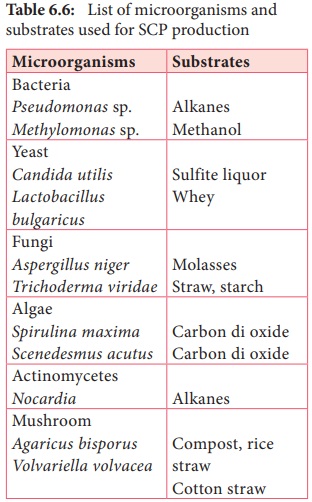 Prevention of contamination by using sterilized medium and fermentation equipments

Selected microorganism is inoculated in a pure form

Adequate aeration and cooling is provided

Microbial biomass is harvested and recovered by flocculation or centrifugation flocculants

Processing biomass and enhancing it for use and storage

2. The quality and quantity of protein content in microorganisms is better compared to higher plants and animals.

3. A wide range of raw materials which are otherwise wasted, can be fruitfully used for SCP production

4. The culture conditions and the fermentation processes are very simple.

5. Microorganisms can be easily handled and subjected to genetic manipulations

Pruteen was the 1st commercial SCP used as animal feed additive with 72% of protein. Pruteen was produced from bacteria named Methylophilus mehylotrophus cultured on methanol.

In CPFTRI, SCP is produced from ­algae cultured on sewage

During the cultivation of SCP, care must be taken to prevent and control the contamination by other micro organisms, which produce mycoxins or cyanotoxins. This is controlled by using the fungus Scytaliclium acidophilum which grows at a low PH. It allows the hydrolysation of paper wastes to a sugar medium and also creates aseptic condition at low cost. 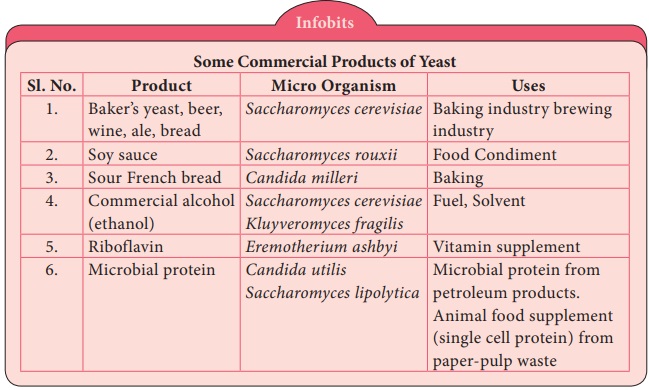