The Indus civilisation, known also as the Harappan civilisation, covers an area of over 1.5 million square kilometres in India and Pakistan.

The Indus civilisation, known also as the Harappan civilisation, covers an area of over 1.5 million square kilometres in India and Pakistan. Sutkagen-dor in the west on the Pakistan–Iran border; Shortugai (Afghanistan) in the north; Alamgirpur (Uttar Pradesh in India). in the east; and Daimabad (Maharashtra in India). in the south are the boundaries with in which the Harappan culture has been found. Its main concentration is in the regions of Gujarat, Pakistan, Rajasthan and Haryana. 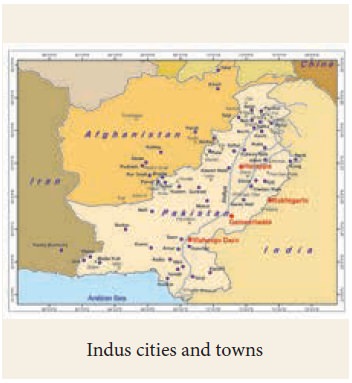 Harappa (Punjab, Pakistan), Mohenjo- Daro (Sindh, Pakistan), Dholavira (Gujarat, India), Kalibangan (Rajasthan, India),         Lothal         (Gujarat, India), Banawali (Rajasthan, India., Rakhigarhi (Haryana, India) and Surkotada (Gujarat, India) are the major cities of the Indus civilisation. Fortification, well-planned streets and lanes and drainages can be observed in the Harappan towns. The Harappans used baked and unbaked bricks and stones for construction. A civic authority perhaps controlled the planning of the towns. A few of the houses had more than one floor. The tank called the Great Bath at Mohenjo-Daro is an important structure, well paved with several adjacent rooms. Some unearthed structures have been identified as the granary. We do not know about the nature of the state or political organisation of the Harappans. But they must have had a political organisation at the level of an early form of state. A male image from Mohenjo-Daro has been identified as ‘priest king’, but we do not know about the accuracy of this interpretation.

The structure identified as granary should be considered as archaeologists’ interpretation.

The Harappans practiced agriculture. They cultivated wheat, barley and various types of millets. They adopted a double cropping system. Pastoralism was also known to them. They reared cattle, sheep and goats. They had knowledge of various animals including elephants but did not use horses. The Harappan cattle are called Zebu, and it is a large breed, often represented in their seals.

The Harappans used chert blades, copper objects and bone and ivory tools. They did not possess knowledge about iron. The tools and equipments such as points, chisels, needles, fishhooks, razors, weighing pans, mirror and antimony rods were made of bronze. The chisels made out of Rohri chert were used by the Harappans. Their weapons included arrows, spears, a chisel-bladed tool and axe. The bronze image of dancing girl from Mohenjo-Daro is suggestive of the use of lost-wax process. 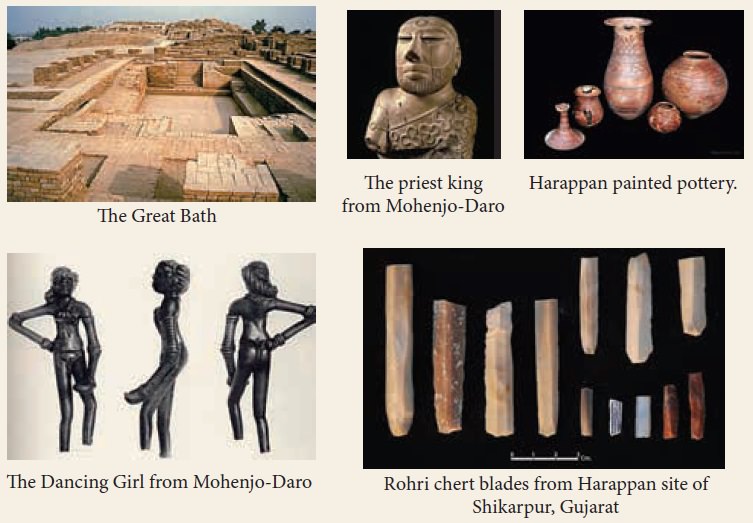 Rohri chert refers to the chert raw material collected from Rohri in Pakistan. It was used by the Harappans for making blades.The Harappans used both stone and bronze tools.

The Harappans used metal and stone adornments. They had knowledge of cotton and silk textiles. They made carnelian, copper and gold ornaments. Faience, stoneware and shell bangles were also used. Some of them had etched designs, and the Harappans exported them to the Mesopotamia. 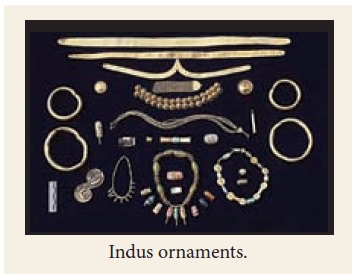 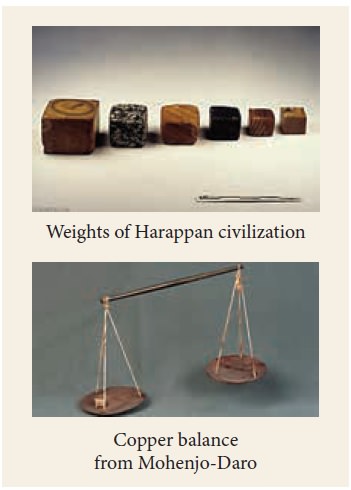 The Harappans developed a system of proper weights and measures. Since they engaged in commercial transactions, they needed standard measures. The cubical chert weights are found at the Harappan sites. The copper plates for weighing balances have also been found.The weights point to their knowledge of the binary system. The ratio of weighing is doubled as 1:2:4:8:16:32.

The seals from various media such as steatite, copper, terracotta and ivory are found in the Harappan sites. They were probably used in the trade activities. The Harappan script is not yet deciphered. About 5,000 texts have been documented from the Harappan sites. Some scholars are of the view that the script is in Dravidian language.

The terracotta figurines, paintings on the pottery and the bronze images from the Harappan sites suggest the artistic skills of the Harappans. ‘Priest king’ made of steatite and dancing girl made of bronze (both from Mohenjo-Daro) as well as stone sculptures from Harappa, Mohenjo- Daro and Dholavira are the important objects of art. Toy carts, rattles, wheels, tops, marbles and hop scotches made in terracotta suggest the amusement of the Harappan people. 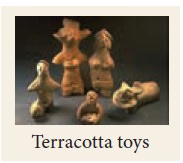 The  Indus  people  had  a  close relationship[ with nature. They worshipped pipal trees. Some of the terracotta figures resemble the mother goddess. Fire altars have been identified at Kalibangan. The Indus people buried the dead. Burials were done elaborately and evidence for cremation has also been found.

Original Inhabitants and their Culture

The authors of the Harappan civilisation are not known, since the script has not been deciphered. One school of thought argues that they spoke the Dravidian language. The archaeological evidence shows movement of the Harappans to the east and south after the decline of the Indus civilisation. It is probable that some of the Harappan people moved into different parts of India. Only the decipherment of the script can give a definite answer.

Indus civilisation had more than one group of people. Several groups including farmers, pastoralists and hunter-gatherers lived in the Indus region. The Indus region had villages and large towns. The population was mixed.

The period of the civilisation has been divided into Early Harappan, starting around 3300 BCE and continuing to 2600 BCE and mature Harappan, are the last phase civilisation from 2600 to 1900 BCE. The later Harappan existed upto 1700 BCE.

The Indus civilisation and its urban features started declining from about 1900 BCE. Changes in climate, decline of the trade with Mesopotamia and drying up or flooding of the river Indus, foreign invasion were some of the reasons attributed to the collapse of this civilisation and for the migration of people in the southern and eastern directions. It did not completely disappear. It continued as rural culture. 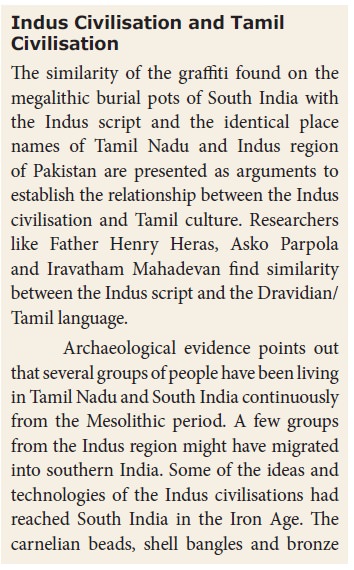