Societies before the modern times are classified as bands, tribes, chiefdoms and proto-state by scholars.

Societies before the modern times are classified as bands, tribes, chiefdoms and proto-state by scholars. Early societies were organised as bands during the Pre-Mesolithic Age.

Bands were small groups of people who were nomadic, making their living on hunting and gathering.

As the Neolithic way of life came into practice, large groups of people were concentrated in the villages. They were organised as tribal communities with a sedentary or semi sedentary lifestyle. The tribal organisations that developed in the Mesolithic times were mostly egalitarian in nature.

The chiefdoms are political formations larger than the tribal- level formations. People under chiefdoms lived over a larger area than the areas covered by tribes. Social distinction existed among these groups in terms of wealth and authority.

The cultural developments after the Neolithic period in certain regions that had a flowing river and rich and fertile alluvial soil gave rise to civilisations. In the post-Neolithic period, that is, in the Bronze Age societies, early form of state (proto-state) originated in the areas where agricultural surplus and population density was more. 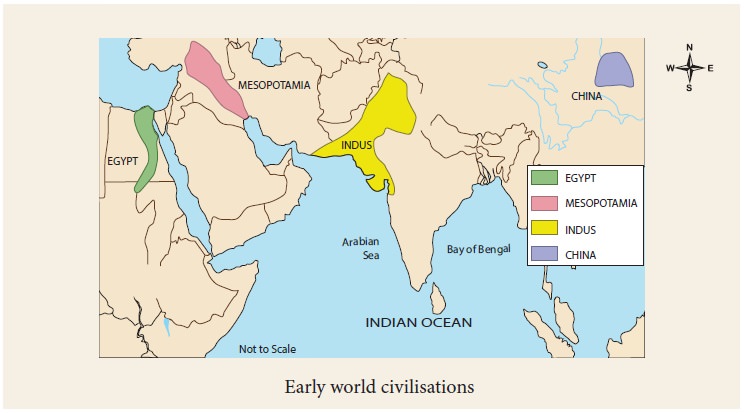 These early states had a political system that controlled many smaller regions, chiefs and cities through conquests. The kings and royals occupied the higher position in the social hierarchy. Palatial buildings were built for their dwelling. Priests, king’s officials and traders formed the middle strata. Craft persons and peasants formed the lower sections in this hierarchical social system. Taxes were collected from the peasants and artisans. Language was refined, literary texts were composed and script developed. Sciences, including mathematics and astronomy, emerged from research. The process of urbanisation began.