As one of the oldest civilisations, the Egyptian civilisation is known for its monumental architecture, agriculture, arts, sciences and crafts at a very early age.

As one of the oldest civilisations, the Egyptian civilisation is known for its monumental architecture, agriculture, arts, sciences and crafts at a very early age.

Egypt lies in the north-eastern corner of the African continent. It is bounded by the Red Sea on the east and Mediterranean Sea in the north. Egypt is irrigated by the River Nile, which originates in Lake Victoria in the south and flows into the Mediterranean Sea in the north. Deserts are seen on both sides of the Nile River. The Egyptian civilisation depended solely upon the flow of Nile River, and hence Egypt was called as the Gift of Nile by the Greek historian Herodotus. The Nile also served as a means of transport. The Nile valley is very rich and fertile as the river deposits fresh alluvium every year. This alluvium nurtured agriculture and helped to produce surplus of food grains, leading to the development of Egyptian civilisation. The dry regions on both the sides of the Niles, however remained deserts.

The Egyptian kingdoms generally controlled the whole of Nile valley and when they became weak, the feudal lords and invaders dominated the region. Egypt was invaded by the Hyksos (around 1700 BCE), the Persians and the Greeks under the Alexander the Great, in 332 BCE, and later by the Romans. Ptolemies (Ptolemaic dynasty) ruled Egypt after Alexander’s conquest. At the end of Ptolemaic rule, Roman influence became dominant. Cleopatra VII, Julius Caesar and Mark Antony dominated the political affairs of the pre-Roman Egypt. In 30 BCE, the Roman Empire annexed Egypt. After the conquest by the Romans, Egypt became intimately connected with the Sangam Age Tamilagam by the sea route.

The Hyksos were the rulers of the 15th dynasty of Egypt and they were probably from West Asia.

Persians are the people from the region of Persia, the ancient Iran.

Greek refers to the language and people of modern-day nation-state of Greece in Europe.

Rome refers to the ancient Roman Empire, which had as its capital the city of Rome in Italy.

The Egyptian king was known as the Pharaoh. The people treated pharaoh as a divine form. Under the pharaoh, there was a hierarchy of officials including viziers, the governors of provinces, local mayors and tax collectors. The entire social system was supported by the work and production of artisans including stone cutters, masons, potters, carpenters, coppersmiths and goldsmiths, peasants and workers. Land belonged to the king and was assigned to the officials. Slavery was not common, but captives were used as slaves. 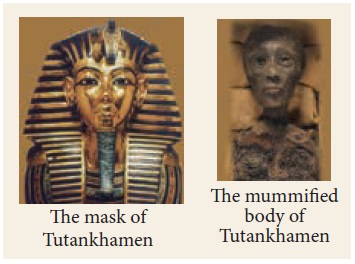 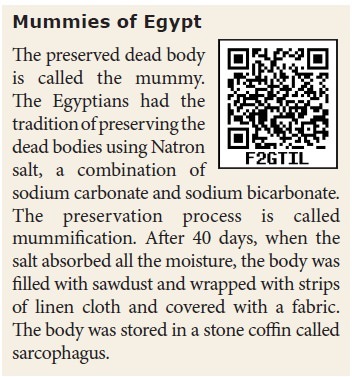 Viziers were the high officials who administered territories under the direction of the Pharaohs.

The Egyptians believed in life after death. Therefore, they preserved the dead body. The art of preserving the dead body is known as mummification. Pyramids and tombs were built to preserve the body of pharaohs.

The famous Egyptian pharaoh Tutankhamen’s (who ruled from 1332 to 1322 BCE) tomb with a rich variety of offerings is located near Luxor in Egypt. The mask of his mummy made of gold and decorated with precious stones is an important artefact of the Egyptian civilisation.

The Egyptians cultivated wheat, barley, millets, vegetables, fruits, papyrus and cotton. Papyrus was used for making rope mats and sandals, and later for producing paper. They domesticated cattle, sheep, goat and pigs, and hunted wild animals. They had pets such as dogs, cats and monkeys. The Egyptians had trade relations with Lebanon, Crete, Phoenicia, Palestine and Syria. Gold, silver and ivory were imported, and they acquired the 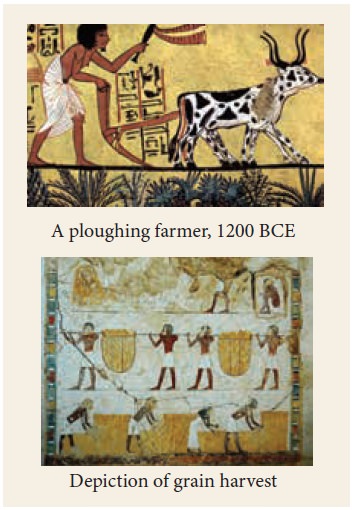 Lapis Lazuli, a precious stone of bluish colour, from Afghanistan.

The Egyptians excelled in art and architecture. Their writing is also a form of art. Numerous sculptures, painting and carvings attest to the artistic skills of Egyptians.

The pyramids are massive monuments built as tombs of mourning to the Pharaohs. The great pyramids near Cairo are known as the Giza Pyramids. Pyramids are considered to be one of the wonders of the world, and they were built between 2575 and 2465 BCE. These monuments display the engineering, architectural and human resource management skills of the Egyptians.

The Great Sphinx of Giza is a massive limestone image of a lion with a human head. It is dated to the time of Pharaoh Khafre. It is one of the largest sculptures of the world 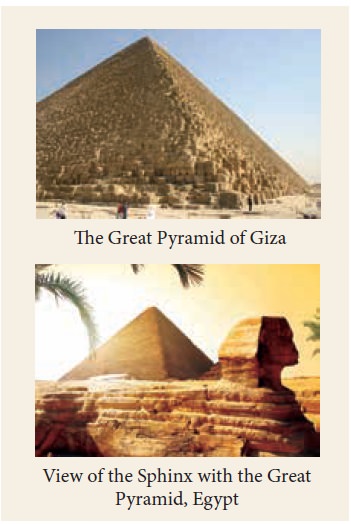 and measures seventy three metres in length and twenty metres in height.

Egyptians practiced polytheism. Amon, Re, Seth, Thoth, Horus and Anubis are some of the gods of Egyptians. They worshipped many gods, but the Sun god, Re, was the predominant one. Later on, the Sun god was called Amon. Amon was considered to be the king of gods. Anubis is the god of death, related to embalming of the dead. He is considered the protector of the dead and depicted with a jackal head. Thoth was the god of writing and learning. He has the head of the bird, ibis. 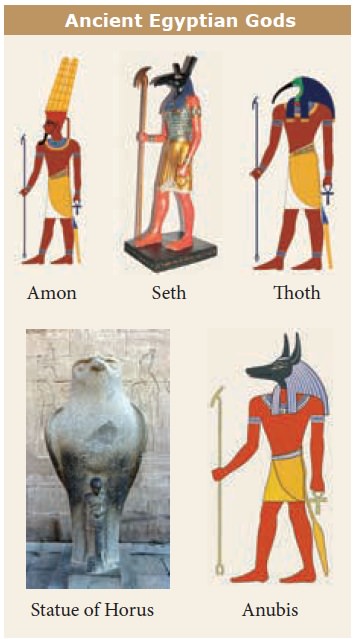 Egyptian civilisation excelled in science, literature, philosophy, astronomy, mathematics and the measurement system. Sundial, water clock and glass were developed by the Egyptians. They devised a solar calendar that consisted of twelve months of thirty days each, with five days added to the end of a year. This calendar was introduced as early as 4200 BCE. Literary works included treatises on mathematics, astronomy, medicine, magic and religion. The Egyptians also distinguished themselves in painting, art, sculpture, pottery, music and weaving.

Egyptians are well known for their writing system. Their form of writing is known as hieroglyphic. Hieroglyphic was used in the inscriptions on seals and other objects. The heretic, an another form of writing, was used for common purposes. This form of writing used a pictogram-based system. It was developed around 3000 BCE and many texts and books were written using this script. The Egyptian writing system was deciphered by the French scholar, Francois Champollion (1822 CE). He used the Rosetta stone, a trilingual inscription, for deciphering the script. This inscription, which was written in Hieroglyphic, Demotic and Greek, was taken to France by Napoleon and from there it was taken to England. Now this inscription is on display in the British Museum London. 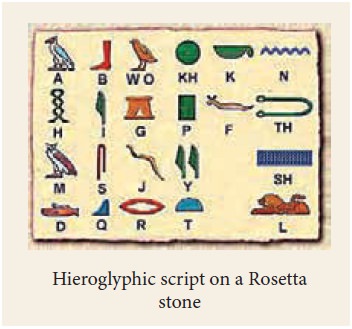 Characteristics and Contributions of the Egyptian Civilisation

·        The pyramids and their designs show their mathematical and surveying skills.

·        Hieroglyphic writing system attests to their skills in handling symbols.

·        They applied innovation in the use of science and technology.