Carbon and its Compounds

1. The molecular formula of an open chain organic compound is C3H6. The class of the compound is

2. The IUPAC name of an organic compound is 3-Methyl butan-1-ol. What type compound it is?

3. The secondary suffix used in IUPAC nomenclature of an aldehyde is ____

4. Which of the following pairs can be the successive members of a homologous series?

a. Reduction of ethanol

b. Combustion of ethanol

6. Rectified spirit is an aqueous solution which contains about _______ of ethanol

7. Which of the following are used as anaesthetics?

9. Which of the following statements is wrong about detergents?

a. It is a sodium salt of long chain fatty acids

b. It is sodium salts of sulphonic acids

c. The ionic part in a detergent is –SO3–Na+

d. It is effective even in hard water.

1.   An atom or a group of atoms which is responsible for chemical characteristics of an organic compound is called functional group.

2.   The general molecular formula of alkynes is CnH2n_2

3.   In IUPAC name, the carbon skeleton of a compound is represented by root word (root word / prefix / suffix)

8.   The alkaline hydrolysis of fatty acids is termed as Saponification

9.   Biodegradable detergents are made of straight(branched / straight) chain hydrocarbons 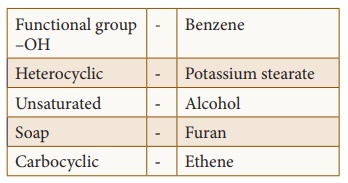 Answer the following questions using the data given below:

i) A and R are correct, R explains the A.

iii) A is wrong, R is correct.

iv) A and R are correct, R doesn’t explains A.

Reason: Calcium and magnesium salts of detergents are water soluble.

Answer: i) A and R are correct, R explains the A.

Answer: iv) A and R are correct, R doesn’t explains A.

1. Name the simplest ketone and give its structural formula.

2. Classify the following compounds based on the pattern of carbon chain and give their structural formula: (i) Propane (ii) Benzene (iii) Cyclobutane (iv) Furan

3. How is ethanoic acid prepared from ethanol? Give the chemical equation.

Ethanoic acid is prepared in large scale, by the oxidation of ethanol in the presence of alkaline potassium permanganate or acidified potassium dichromate.

4. How do detergents cause water pollution? Suggest remedial measures to prevent this pollution?

Some detergents having a branched hydrocarbon chain are not fully biodegradable by micro­organisms present in water. So, they cause water pollution.

We have to limit our use of detergents. Using the minimum amount of detergent while washing clothes or dishes will reduce the pollution. It is better to use only phosphate free detergents.

i. It is a sodium salt of long chain fatty acids.

iii. It is prepared from animal fats or vegetable oils.

iv. Its effectiveness is reduced when used in hard water.

v. It forms a scum in hard water.

vi. It has poor foaming capacity.

i. It is sodium salt of sulphonic acids.

iii. It is prepared from hydrocarbons obtained from crude oil.

iv. It is effective even in hard water.

v. Does not form a scum in hard water.

vi. It has rich foaming capacity.

vii. Most of the detergents are non-biodegradable.

1. What is called homologous series? Give any three of its characteristics?

Homologus series is a group or a class of organic compounds having same general formula & similar chemical properties in which the successive numbers differ by a -CH2 group.

(i) Each member of the series differs from the preceding or succeeding member by one methylene group (-CH2) and hence by a molecular mass of 14 amu.

(ii) All members of a homologous series contain the same elements and functional group.

(iii) They are represented by a general molecular formula. e.g. Alkanes, CnH2n+2.

(iv) The members in each homologous series show a regular gradation in their physical properties with respect to their increase in molecular mass.

(v) Chemical properties of the members of a homologous series are similar.

(vi) All the members can be prepared by a common method.

2. Arrive at, systematically, the IUPAC name of the compound: CH3–CH2–CH2–OH.

Step 1: The parent chain consists of 3 carbon atoms. The root word is ‘Prop’.

Step 2: There are single bonds between the carbon atoms of the chain. So, the primary suffix is ‘ane’.

Step 3: Since, the compound contains - OH group, it is an alcohol. The carbon chain is numbered from the end which is closest to -OH group. (Rule 3)

Step 4: The locant number of -OH group is 1 and thus the secondary suffix is ‘1-ol’.

3. How is ethanol manufactured from sugarcane?

Ethanol Manufacture: Ethanol is manufactured in industries by the fermentation of molasses, which is a by-product obtained during the manufacture of sugar from sugarcane. Molasses is a dark coloured syrupy liquid left after the crystallization of sugar from the concentrated sugarcane juice. Molasses contain about 30% of sucrose, which cannot be separated by crystallization. It is converted into ethanol by the following steps:

(i) Dilution of molasses : Molasses is first diluted with water to bring down the concentration of sugar to about 8 to 10%.

(ii) Addition of Nitrogen source : Molasses usually contains enough nitrogenous matter to act as food for yeast during the fermentation process. If the nitrogen content of the molasses is poor, it may be fortified by the addition of ammonium sulphate or ammonium phosphate.

(iii) Addition of Yeast : The solution obtained in step (ii) is collected in large ‘fermentation tanks’ and yeast is added to it. The mixture is kept at about 303K for a few days. During this period, the enzymes invertase and zymase present in yeast, bring about the conversion of sucrose into ethanol.

Distillation of ‘Wash’ : The fermented liquid (i.e. wash), containing 15 to 18 percent alcohol, is now subjected to fractional distillation. The main fraction drawn is an aqueous solution of ethanol which contain 95.5% of ethanol and 4.5% of water. This is called rectified spirit. This mixture is then refluxed over quicklime for about 5 to 6 hours and then allowed to stand for 12 hours. On distillation of this mixture, pure alcohol (100%) is obtained. This is called absolute alcohol.

4. Give the balanced chemical equation of the following reactions:

(i) Neutralization of NaOH with ethanoic acid.

(ii) Evolution of carbon dioxide by the action of ethanoic acid with NaHCO3.

(i) Ethanoic acid reacts with sodium hydroxide to form sodium ethanoate and water.

(iii) Ethanol is oxidized to ethanoic acid with alkaline KMnO4. or acidified K2Cr2O7

(iv) Ethanol is highly inflammable liquid. It burns with oxygen to form carbon dioxide and water.

5. Explain the mechanism of cleansing action of soap.

(i) A soap molecule contains two chemically distinct parts that interact differently with water. It has one polar end, which is a short head with a carboxylate group (-COONa) and one non-polar end having the long tail made of the hydrocarbon chain.

(iii) When a soap or detergent is dissolved in water, the molecules join together as clusters called 'micelles’. Their long hydrocarbon chains attach themselves to the oil and dirt. The dirt is thus surrounded by the non-polar end of the soap molecules. The charged carboxylate end of the soap molecules makes the micelles soluble in water. Thus, the dirt is washed away with the soap.

1. The molecular formula of an alcohol is C4H10O. The locant number of its –OH group is 2.

(i) Draw its structural formula.

(iii) Is it saturated or unsaturated? - Saturated.

2. An organic compound ‘A’ is widely used as a preservative and has the molecular formula C2H4O2. This compound reacts with ethanol to form a sweet smelling compound ‘B’.

(i) Identify the compound ‘A’. - Ethanoic acid (acetic acid).

(ii) Write the chemical equation for its reaction with ethanol to form compound ‘B’. 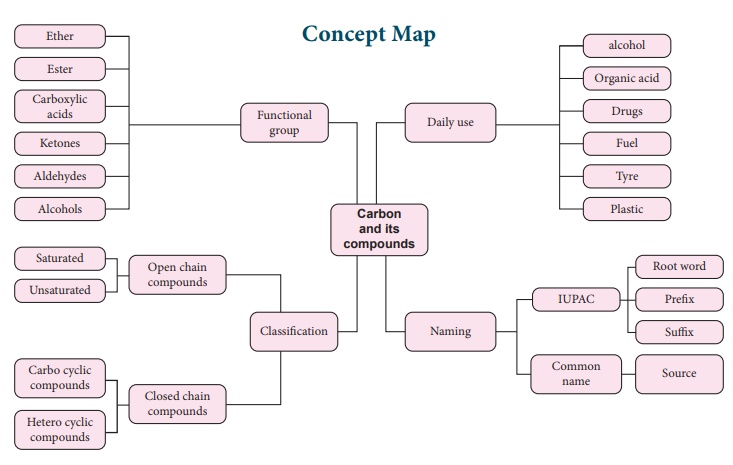