IgG, a 7S immunoglobulin, is the most abundant immunoglobulin in human serum and in the serum of most mammalian species. It is also the immunoglobulin most frequently detected in large concentrations in multiple myeloma patients.

For this reason it was the first immunoglobulin to be purified in large quantities and to be extensively studied from the structural point of view. The basic knowledge about the structure of the IgG molecule was obtained from two types of experiments:

1.           Proteolytic digestion. The incubation of purified IgG with papain, a proteolyticenzyme extracted from the latex of Carica papaya, results in the splitting of the molecule in two fragments that differ both in charge and antigenicity. These fragments can be easily demonstrated by immunoelectrophoresis (Fig. 5.2), a technique that separates proteins by charge in a first step, allowing their anti-genic characterization in a second step.

2.           Reduction of disulfide bonds. If the IgG molecule is incubated with a reducingagent containing free SH groups and fractionated by gel filtration (a technique which separates proteins by size) in conditions able to dissociate noncovalent in-teractions, two fractions are obtained. The first fraction corresponds to polypep-tide chains of MW 55,000 (heavy chains); the second corresponds to polypeptide chains of MW 23,000 (light chains) (Fig. 5.3). 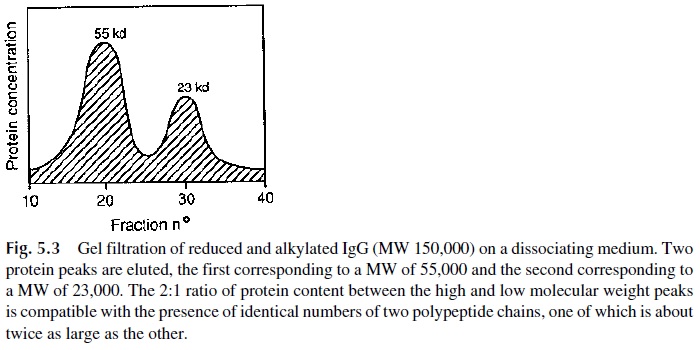 The sum of data obtained by proteolysis and reduction experiments resulted in the conception of a diagrammatic two-dimensional model for the IgG molecule (Fig. 5.4). The results of proteolytic digestion experiments can be reanalyzed on the basis of this model: 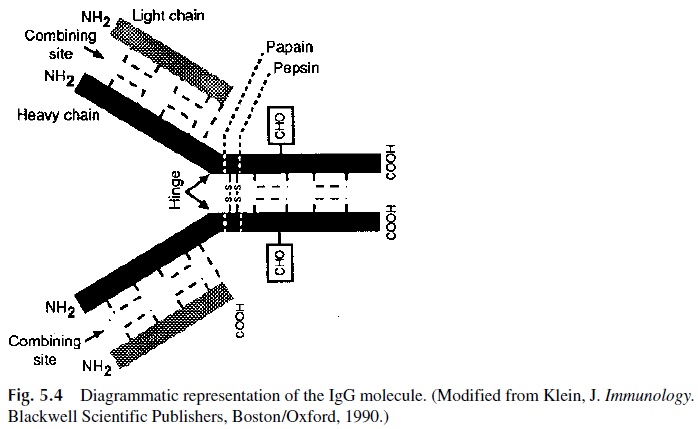 1. Papain splits the heavy chains in the hinge region (so designated because this region of the molecule appears to be stereoflexible) and results in the separation of two Fab fragments and one Fc fragment per IgG molecule (Fig. 5.5). The Fab fragments are so designated because they contain the antigen-binding site, while the Fc fragment received this designation because it can be easily crystallized.

2. A second proteolytic enzyme, pepsin, splits the heavy chains beyond the disul- fide bonds that join them at the hinge region, producing a double Fab fragment or F(ab’ )2 (Fig. 5.6), while the Fc portion of the molecule is digested into pep-tides. The comparison of Fc, Fab, F(ab’ )2, and whole IgG molecules shows both important similarities and differences between the whole molecule and its frag-ments.

a. Both Fab and F(ab’ )2 contain antibody-binding sites, but while the intact IgG molecule and the F(ab’ )2 are bivalent, the Fab fragment is monovalent. Therefore, a Fab fragment can bind to an antigen but cannot cross-link two antigen molecules.

b. An antiserum raised against the Fab fragment reacts mostly against light-chain determinants; the immunodominant antigenic markers for the heavy chain are located in the Fc fragment.

c. The F(ab’ )2 fragment is identical to the intact molecule as far as antigen-binding properties, but lacks the ability to fix complement, bind to cell membranes, etc., characteristics determined by the Fc region of the molecule.