Structural and Antigenic Heterogeneity of Heavy and Light Chains

As larger numbers of purified immunoglobulins were studied in detail, it became obvious that there was a substantial degree of structural heterogeneity, recognizable both by physiochemical methods as well as by antisera able to define different antigenic types of heavy and light chains.

STRUCTURAL AND ANTIGENIC HETEROGENEITY OF HEAVY AND LIGHT CHAINS

As larger numbers of purified immunoglobulins were studied in detail, it became obvious that there was a substantial degree of structural heterogeneity, recognizable both by physiochemical methods as well as by antisera able to define different antigenic types of heavy and light chains.

The light chains also proved to be antigenically heterogeneous and two isotypes were defined: kappa and lambda. Each immunoglobulin molecule is constituted by a pair of identical heavy chains and a pair of identical light chains; hence, a given immunoglobulin molecule can have either kappa or lambda chains but not both. A normal individual will have a mixture of immunoglobulin molecules in his serum, some with kappa chains (e.g., IgGl ), and others with lambda chains (e.g., IgGk ). Normal serum IgG has a 2:1 ratio of kappa chain–over lambda chain–bearing IgG molecules. In contrast, monoclonal im-munoglobulins have one single heavy-chain isotype and one single light-chain isotype. This results from the fact that monoclonal proteins are the products of large number of cells all derived from a single mutant, constituting one large clone of identical cells producing identical molecules.

Antigenic differences between the heavy chains of IgG and IgA were later charac-terized and, based on them, IgG and IgA subclasses were defined (Tables 5.2 and 5.3). Some interesting biological and structural differences have been demonstrated for IgG and IgA proteins of different subclasses. 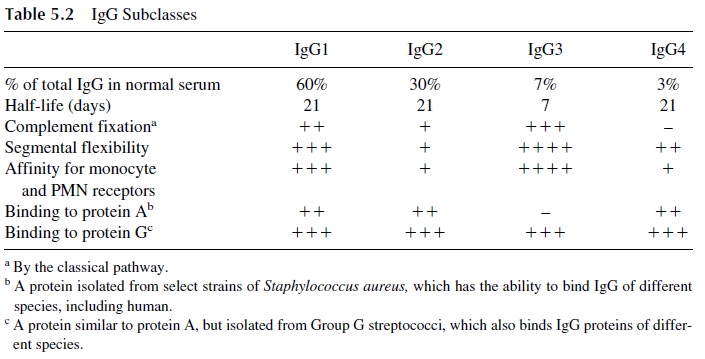 In the case of IgG subclasses, IgG1 and IgG3 are more efficient in terms of comple-ment fixation and have greater affinity for monocyte receptors. Those properties can be correlated with a greater degree of biological activity, both in normal antimicrobial re-sponses and in pathological conditions. Physiologically, these properties result in enhanced opsonization and bacterial killing, Pathologically, the formation of immune complexes containing IgG1 and IgG3 antibodies is more likely to cause tissue inflammation.

From the structural point of view, the IgG3 subclass has the greatest number of struc-tural and biological differences relative to the remaining IgG subclasses. Most differences appear to result from the existence of an extended hinge region (which accounts for the greater MW) and with a large number of disulfide bonds linking the heavy chains together (estimates of their number vary between 5 and 15). This extended hinge region seems to be easily accessible to proteolytic enzymes, and this lability of the molecule is likely to ac-count for its considerably shorter half-life.

Of the two IgA subclasses known, it is interesting to note that a subpopulation of IgA2 molecules carrying the A2m(1) allotype is the only example of a human im-munoglobulin molecule lacking the disulfide bond joining heavy and light chains. The IgA2 A2m(1) molecule is held together through noncovalent interactions between heavy and light chains.