Variable and Constant Regions of the Immunoglobulin Molecule

A. Variable and Constant Regions of the Immunoglobulin Molecule

The light chains of human immunoglobulins are composed of 211–217 amino acids. As mentioned above, there are two major antigenic types of light chains (k and λ). When the amino acid sequences of light chains of the same type were compared, it became evident that two regions could be distinguished in the light-chain molecules: a variable region, comprising the portion between the amino-terminal end of the chain and residues of 107–115, and a constant region, extending from the end of the variable region to the car-boxyl terminus (Fig. 5.7). 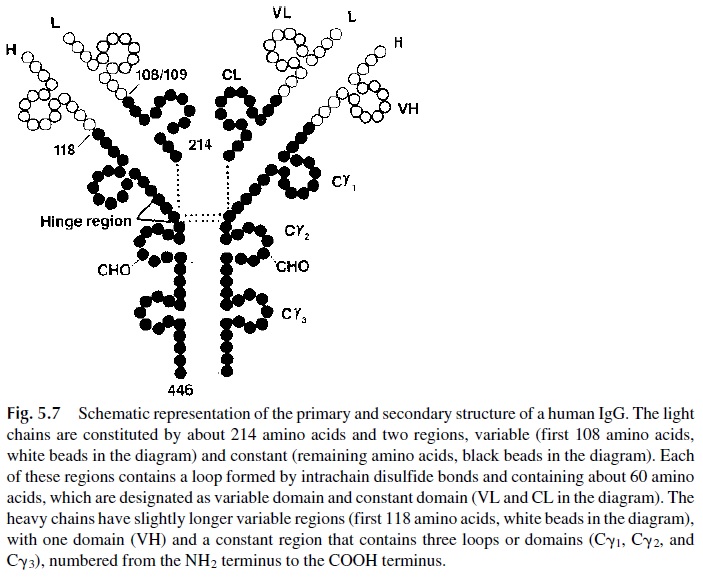 In contrast, the amino acid sequence of the light-chain variable regions is different even in proteins of the same antigenic type, and early workers thought that this sequence would be totally individual for any single protein. With increasing data, it became evident that some proteins shared similarities in their variable regions, and it has been possible to classify variable regions into three groups: Vk , Vλ , and VH. Each group has been further subdivided into several subgroups. The light-chain V region subgroups (Vk , Vλ ) are “type” specific, i.e., Vk subgroups are only found in k proteins and Vλ subgroups are always as-sociated with λ chains. In contrast, the heavy-chain V region subgroups (VH) are not “class” specific. Thus, any given VH subgroup can be found in association with the heavy chains of any of the known immunoglobulin classes and subclasses.

The constant region is almost three times larger; for most of the heavy chains, it starts at residue 116 and ends at the carboxyl terminus (Fig. 5.7). The maximal degree of homology is found between con-stant regions of IgG proteins of the same subclass.

The immunoglobulin molecule contains several disulfide bonds formed between contigu-ous residues. Some of them join two different polypeptide chains (interchain disulfide bonds), keeping the molecule together. Others (intrachain bonds) join different areas of the same polypeptide chain, leading to the formation of “loops.” These loops and adjacent amino acids constitute the immunoglobulin domains, which are folded in a characteristic -pleated-sheet structure (Fig. 5.8). 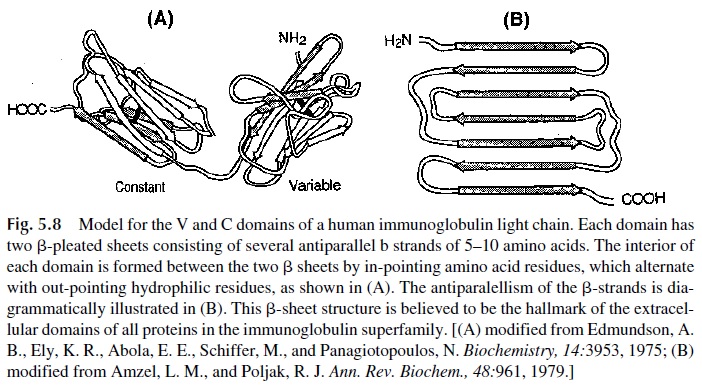 The “hinge region” is located between CH1 and CH2, and its name is derived from the fact that studies by a variety of techniques, including fluorescence polarization, spin la-beling, electron microscopy, and x-ray crystallography, have shown that the Fab fragments can rotate and waggle, coming together or moving apart. As a consequence IgG molecules can change their shape from an “Y” to a “T” and vice versa using the region intercalated between Cγ1 and Cγ2 as a hinge. The length and primary sequence of the hinge regions play an important role in determining the segmental flexibility of IgG molecules. For ex-ample, IgG3 has a 12-amino-acid hinge amino-terminal segment and has the highest seg-mental flexibility. The hinge region is also the most frequent point of attack by proteolytic enzymes. In general, the resistance to proteolysis of the different IgG subclasses is in-versely related to the length of the hinge amino-terminal segments—IgG3 proteins are the most easily digestible, while IgG2 proteins, with the shortest hinge region, are the most re-sistant to proteolytic enzymes.