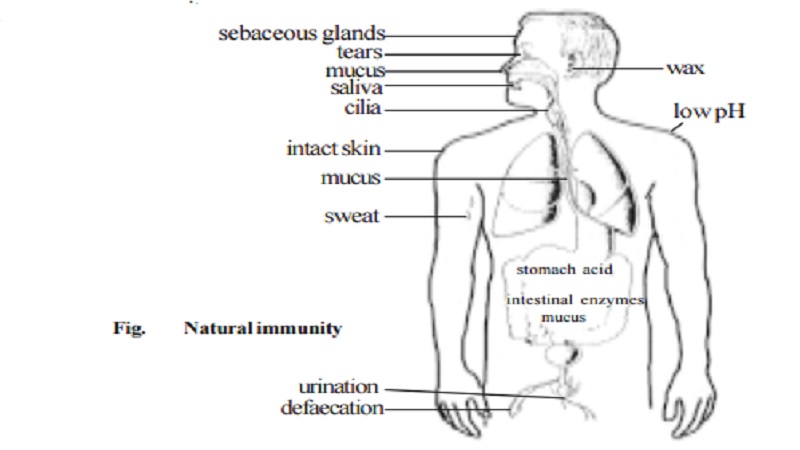 Animals and human beings are continually exposed to various infectious agents like bacteria, viruses, fungi and parasites. It has long been noticed that survivors of certain diseases, e.g., measles, are not attacked by the same disease again. Clearly, these people have become immune to the concerned disease.

Animals and human beings are continually exposed to various infectious agents like bacteria, viruses, fungi and parasites. It has long been noticed that survivors of certain diseases, e.g., measles, are not attacked by the same disease again. Clearly, these people have become immune to the concerned disease. The system of animal body, which protects it from various infectious agents and cancer, is called Immune system. A study of the immune system is known as Immunology. This chapter introduces the fundamental concepts of immune system and their use for the improvement of human health and welfare.

The Latin term ' Immunis', meaning ' exempt' or ' freedom', gave rise to the English word immunity. It refers to all the mechanisms used by the body for protection from environmental agents that are foreign to the body. These agents may be microorganisms or their products, certain food items, chemicals, drugs and pollen grains. Immunity is of two types : (a) innate, and (b) acquired immunity.

1.  Anatomical Barriers : These barriers block the entry of organisms into the body. The skin and the mucous membrane lining the respiratory and intestinal as well as the reproductive passages constitute the barriers. Mucous material entraps foreign microorganisms. The ciliary movements produced by the epithelial lining cells expel out micro-organisms from the body.

2. Physiological Barriers : Factors like body temperature, pH and various body secretions, prevent the growth of pathogenic micro-organisms. For example, fever response inhibits growth of many pathogens. Acidity of the stomach contents due to HCl secretionkills ingested micro-organisms. Lysozyme present in secretions, such as tears and saliva, digest bacterial cell walls. Certain cells, like WBC, when infected with a virus, respond by releasing anti viral proteins, called interferons. Interferons, in turn, make the cells in the vicinity resistant to viral infections. As a result, the concerned persons exhibit increased resistance to viral infections.

3. Phagocytic Barriers : Phagocytosis is an important mechanism of innate immunity. It is performed by leucocytes. In response to pathogenic infections, the total count of leucocytes will increase sharply. Humans contain wandering phagocytes that circulate throughout the body. The most important phagocytes are the macrophages and the neutrophils. Macrophages are large irregular-shaped cells that engulf microbes, viruses and cellular debris. In response to an infection, monocytes are liberated at

the site of infection. These monocytes get converted into macrophages. These cells are provided with bacteriolytic enzymes and free radicals, which destroy the pathogens.

4. Inflammatory Barriers : Usually an infection or tissue injury results in redness and swelling, along with pain and production of heat that may result in fever. The above phenomenon is known as inflammatory response. This response occurs due to release of chemical alarm signals, notably histamine, serotonin and prostaglandins, by the damaged mast cells. At the site of inflammation there may be leakage of vascular fluid, which contains serum proteins with antibacterial activity. Further, there is an influx of phagocytic cells into the affected area. These responses inhibit and destroy the invading microorganisms.

Besides the phagocytes, natural killer cells (NK cells) (T Lymphocytes) kill virus-infected cells and some tumour cells of the body by creating perforin-lined pores in the plasma membrane of the target cells. These pores allow entry of water into the target cell, which then swells and bursts.

Acquired immunity, also known as adaptive or specific immunity, is capable of recognizing and selectively eliminating specific microorganisms. Acquired immunity is found only in verterbrates. It supplements the protection provided by innate/natural immunity. It is generated in response to an exposure or encounter to the microorganisms in question. Specific defence mechanisms require several days to be activated, following the failure of non-specific defence mechanisms.

Unique features of the Adaptive immunity

(i) Specificity : It is the ability to distinguish differences among various foreign molecules.

(ii)Diversity : It can recognize a vast variety of foreign molecules.

Discrimination between Self and Non-self : It is able to recognize and respond to molecules that are foreign (non-self) to the body. At the same time, it can avoid response to those molecules that are present within the body (self antigens) of the given animal.

(a) lymphocytes, and (b) antigen presenting cells. A healthy individual possesses about a trillion of lymphocytes. The lymphocytes are of two types viz., T- lymphocytes or T-cells and B - lymphocytes or B - cells. Both the types of lymphocytes, as well as the other cells of the immune response, are produced in bone marrow. The process of their production is called haematopoiesis. Some immature lymphocytes, destined to become thymocytes, migrate via blood to the thymus, where they mature and differentiate as T - cells. The B- cells, on the other hand, mature in the bone marrow itself. The B and T cells, together, generate two types of specific immunity, viz., (a) cell-mediated and (b) antibody-mediated or humoral immunity respectively.

Cell-mediated immunity is the responsibility of a subgroup of T cells, called cytotoxic T lymphocytes (CTLs). An activated cytotoxic lymphocyte is specific to a target cell, which has been infected, and kill the target cell by a variety of mechanisms. This prevents the completion of life cycle of the pathogen and its growth, since it depends on an intact host cell to do that. Cell-mediated immunity is also involved in killing of cancer cells.

Antibody mediated or humoural immunity involves the synthesis of specific antibody molecules called immunoglobulins by the B-lymphtocytes. Each antigen has many different antigenic determinants, each of which matches a specific antibody and binds to it. The B cells, direct the antibody-mediated immunity. The antibody molecules (Igs) may be bound to a cell membrane in the form of receptors or they may remain free. The free antibodies have three main functions viz., 1. agglutination of particulate matter, including bacteria and viruses, 2. opsonisation or coating over bacteria to facilitate recognition and phagocytosis by the phagocytes and 3. neutralization of toxins released by bacteria.

Every antigen is processed by antigen presenting cells(APC), like macrophages, B lymphocytes and dentric cells. The processed antigen is presented on the surface of these cells. A subgroup of T cells called T helper cells, specifically interacts with the presented antigen and becomes activated. The activated T helper cells then activate B cells, and a subgroup of T cells called cytotoxic lymphocytes (CTLs), in a specific manner. The activated B and cytotoxic lymphocytes proliferate to produce clones. All the cells of a clone can recognize the same antigen and eliminate it.