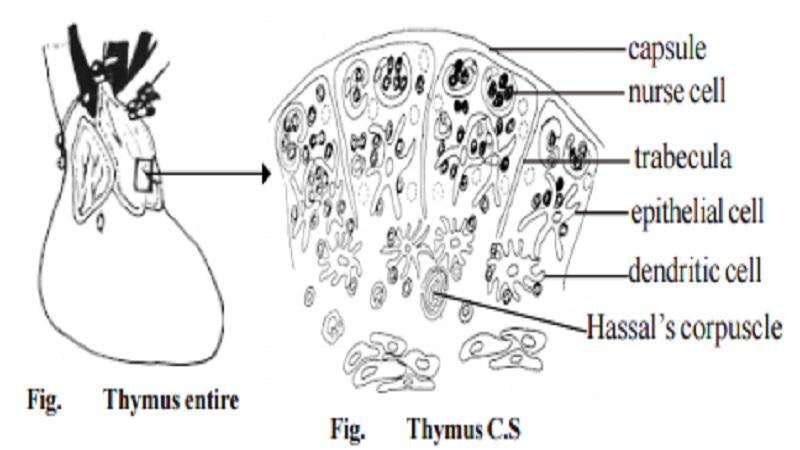 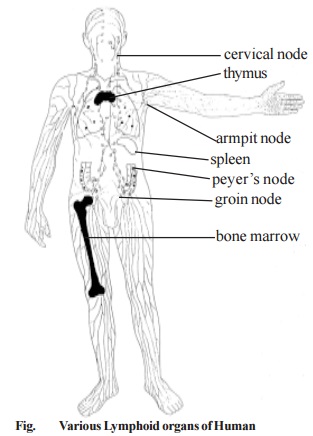 The thymus develops at about the sixth week of gestation. By eighth week, it grows into a compact epithelial structure. Mesenchymal stem cells (precursors of lymphocytes) from the yolk sac, foetal liver and bone marrow reach the thymus and differentiate into the thymic lymphoid cells (thymocytes).

The thymus acquires its characteristic lymphoid appearance by the third month of gestation. It is thus the first organ in all animal species to

become predominantly lymphoid. In human beings, the thymus reaches its maximal size just prior to birth. Thymus continues to grow till about the 12th year. After puberty, it undergoes spontaneous progressive involution, indicating that it functions best only in early life.

The thymus is located just behind the upper part of the heart. It has two lobes surrounded by a fibrous capsule. Septa arising from the capsule divide the gland into lobules which are differentiated into an outer cortex and an inner medulla. The cortex is crowded with actively proliferating small lymphocytes. The medulla consists mainly of epithelial cells and mature lymphocytes amidst which are the hassall's corpuscles, which are whorl-like aggregations of epithelial cells.

The thymus confers immunological competence on the lymphocytes during their stay in the organ. Prethymic lymphocytes are not immunocompetent. In the thymus they are 'educated' so that they become capable of mounting cell mediated immune response against appropriate antigens. This is effected by hormone-like factors produced by the thymus such as thymulin, thymosin andthymopoietin. The importance of thymus in lymphocyte proliferation and development of CMI is evident from the effects of lymphopenia, and in neonatally thymectomised mice.

T lymphocytes are selectively seeded into certain sites in the peripheral lymphatic tissues. These are found in the white pulp of the spleen, around the periarteriole region, and in the paracortical areas of lymph nodes.