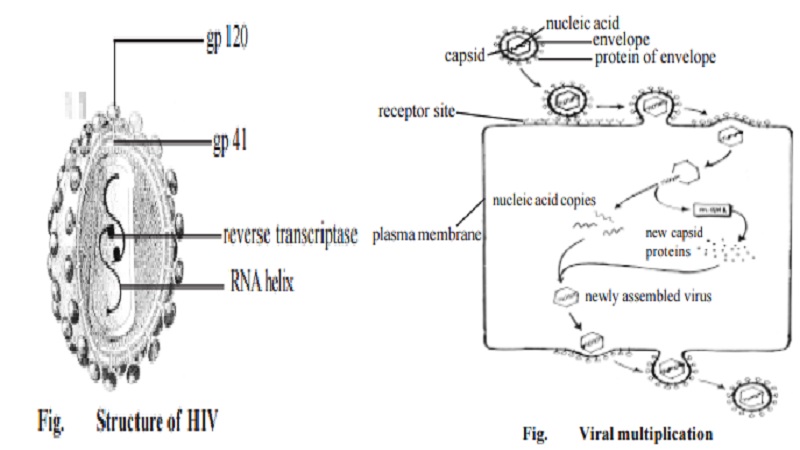 The disease Acquired Immuno Deficiency Syndrome (AIDS) was identified in the year 1981 (December). Early epidemiological studies have established that it is a communicable disease transmitted through sexual contact or through blood and blood products.

AIDS (HIV) and its control

The disease Acquired Immuno Deficiency Syndrome (AIDS) was identified in the year 1981 (December). Early epidemiological studies have established that it is a communicable disease transmitted through sexual contact or through blood and blood products. In 1983 Luc Montagnier at Pasteur Institute, Paris and Gallo at National Institute of Health (NIH) USA isolated the virus that caused AIDS. In 1986, the committee on taxonomy of virus coined the term HIV or Human Immunodeficiency Virus to avoid confusion due to different names being given by different reasearchers.

HIV is new member of the Lentivirinae subfamily of human retroviruses. Retroviruses are RNA viruses, which have the capacity to convert their RNA into DNA with the help of an enzyme called reverse transcriptase.

HIV is spherical in shape. Its size is about 100-140 nm. Like any other virus, it is made up of a central icosahedral capsid core containing the genetic material surrounded by a protein envelope. The protein envelope is attached several spicules of glycoprotein, Like other retroviruses the glycoprotein sticks out on both sides (inside and outside) of its protein coat. The outer position of glycoprotein called gp120 is attached to the gp 41 situated on the inner side of the viral coat. gp 41 is an unusually long protein with over 100 amino acids. gp 120 appears like a knob. Electron microscopic studies have revealed that the distribution of proteins of the viral surface is very much like a soccer ball made of 12 pentagons and 20 hexagons, stitched together to make a sphere. The envelope of HIV also contains other proteins including some HLA antigens (Human Leucocyte Antigen).

The genome of HIV contains two helix of RNA molecules in folded form. The enzyme reverse transcriptase is attached to RNA.

HIV causes profound immunodepression in humans. It is due to the depletion of one type of WBC, which is involved in the formation of antibodies called CD4 plus T-helper cells (lymphocytes). In addition other

cells such as B-lymphocytes and macrophages are destroyed by HIV infection. The infected macrophages serve as the reservoir of viruses and dissiminate to all tissues in the body. HIV is found besides blood, in all body fluids such as semen, vaginal secretion, cervical secretion, breast milk, CSF, synovial fluid, pleural fluid, peritoneal fluid, pericardial fluid and amniotic fluid. HIV can even destroy the brain cells.

The following symptoms have been defined by WHO.

5.                Opportunistic infections such as tuberculosis, oropharyngeal candidiasis (fungal infection in mouth and throat)

9.                An unusual cancer, kaposis sarcoma which produces scattered purplish lesions over the chest and abdomen.

Western Blot is the confirmatory test, which is highly specific and based on specific antibodies to viral core proteins.

1.Screening of blood and blood products.

2. Education to people about do's and don'ts in AIDS contraction and bringing more awareness among the public.

The management of HIV infection involves the above general measures, treatment of opportunistic infections and cancer, antiretroviral drugs, immunomodulators and supportive treatment and counselling.