In linguistics, a homonym is one of a group of words that share the same spelling and the same pronunciation but have different meanings. This usually happens as a result of the two words having different origins. The state of being a homonym is called homonymy.

In linguistics, a homonym is one of a group of words that share the same spelling and the same pronunciation but have different meanings. This usually happens as a result of the two words having different origins. The state of being a homonym is called homonymy.

A homophone is a word that is pronounced the same as another word but differs in meaning. The words may be spelled the same, such as rose (flower) and rose (past tense of "rise"), or differently, such as carat, caret, and carrot, or to, two and too.

All homonyms are homophones because they sound the same. However, not all homophones are homonyms. Homophones with different spellings are not homonyms.

are the words that sound like one another, particularly when that are pronounced the same way but spelt differently.

The temporary release of an accused person awaiting trial, sometimes on the condition that a sum of money is deposited in the court to guarantee their appearance in the court at a future date

To scoop water out of a ship or a boat

To make an emergency descent by parachute from an aircraft

To rescue someone from a difficulty

Bale: A bundle of hay or dry grass

Food used to entice fish or other animals as prey

To deliberately annoy, taunt or torment somebody

Bate: (Of a hawk) beat wings in agitation and flutter off a perch (term used in falconry)

Bawled: To have cried loudly

A small group of musicians and vocalists

A small group of people who have common interests and purposes Banned: Something that is disallowed or illegal

Bard: A poet, traditionally one reciting epics (the Bard is a reference to William Shakespeare)

enclosed by poles or bars

Prohibited to do something and from going from somewhere

Bare: Naked or without any covering

A large, heavy mammal of the family Ursidae, of which there are several species, the largest being the Kodiak Bear of the Arctic regions

Give birth to a child

Bark: The tough outer covering of a tree

Bark: The sharp explosive cry of a dog, fox or a seal

Bark: To utter (a command or order) abruptly and aggressively

A member of the lowest order of British nobility, minor royalty

A powerful person in business or industry( for instance a press baron or a liquor baron) Barren:

(of tree or a plant) Not producing any fruit or seed

To shout noisily or angrily

To bring into the beach from water

Berry: A small juicy fruit without a stone

{lace a dead body in the earth or in a tomb

Cause to disappear or to become unnoticeable

involve oneself deeply in something

A ship’s allotted place at a wharf or dock

Moor or moored in a berth

Provide a berth for a passenger on a train Birth:

The start of life as a physically separate being

The beginning of something, the origin, descent, ancestry

Bettor: A person who plays or places a bet

Use the teeth to cut something into pieces

(Of a policy or situation)Take effect with unpleasant consequences

Byte: (Computing) a group of binary digits or bits (usually eight) operated on a unit

Bloc: An alliance or a group (of political parties or countries)

A large single building subdivided into separate flats or offices

Boar: A wild pig found in the jungle

To make a hole in something

The hollow part inside a gun barrel or other tube

A dull and uninteresting person or activity

A long, thin, flat piece of wood used for floors or other building purposes

The decision-making body of an organization

The provision of regular meals in return for payment or services

Bored: Weary of or uninterested in something or somebody

Bolder: More courageous or braver than somebody

To dig into or through something solid

Bough: A main branch of a tree

A knot tied with two loops and two loose ends

1. Lower the head or bend the upper part of the body as a sign of respect, greeting or shame

Cause to bend with age or under a heavy weight

Give in to pressure or demands

Withdraw or retire from something(to bow out)

A gap in a wall or barrier, especially one made by an attacking army Breech:

The part of a cannon behind the bore

The back part of a rifle or gun barrel

Food made of flour, water and yeast, mixed together and baked

Bred: manner of upbringing – the past tense of breed

Broach: To raise (a sensitive) a subject for discussion

Brooch: An ornamental fastened to clothing with a hinged pin and catch

This is The Complete List of Homonyms beginning with B.

Altar [Platform for worship]       Sacrifices were offered on the altar.

Ascent [The action of going up] Edmond Hillary made his ascent on Mount Everest first.

Be [To exist] You should be quiet.

Blwe [did blow] Police man blew the whistle to stop the car.

Blue [A colour] I wear the blue trouser.

Sell [exchange things for money] They sell the fruits at a high price.

Cymbal [a round brass plate used in a musical instrument] Rosy plays the cymbal in our school band:

Dye [colour] He applied dye to his hair.

Fare [charge] The ticket fare has been hiked.

Flew [past tense for fly] Birds flew to warmer places.

Flue [pipe in a chimney] Smoke is let out through flue. 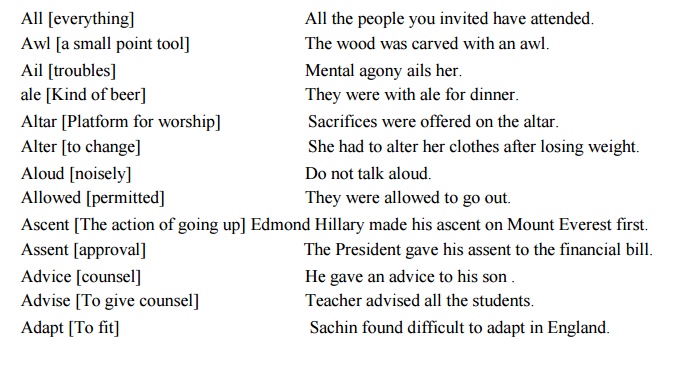 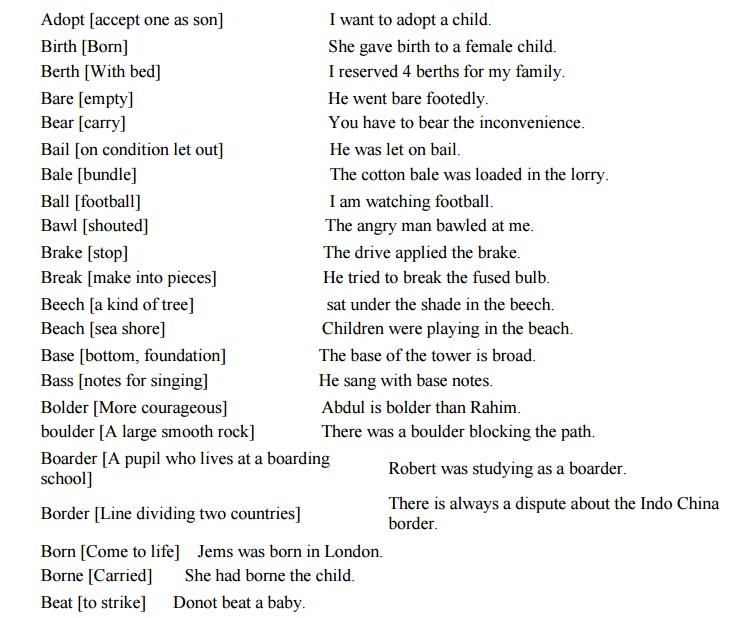 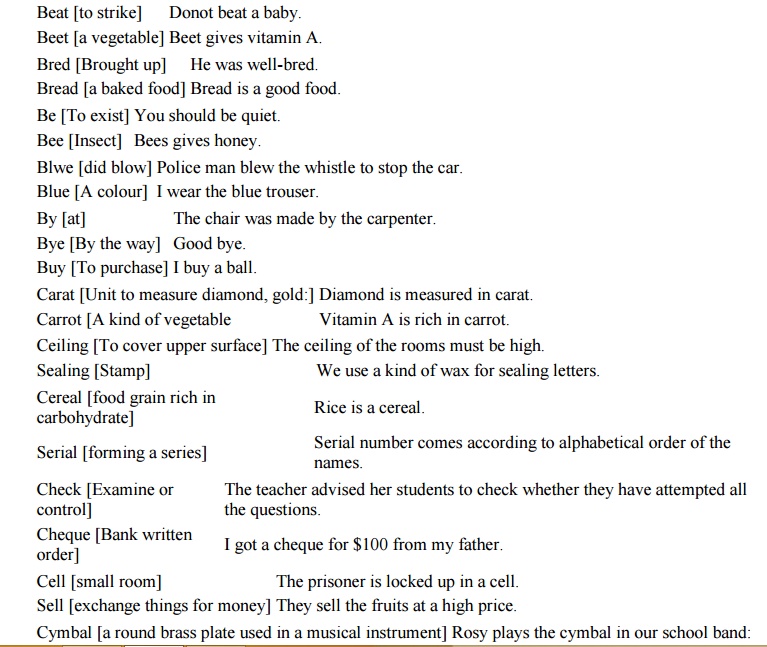 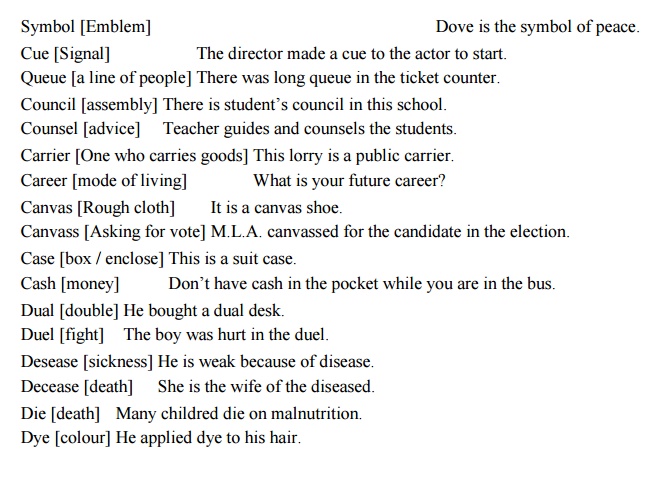 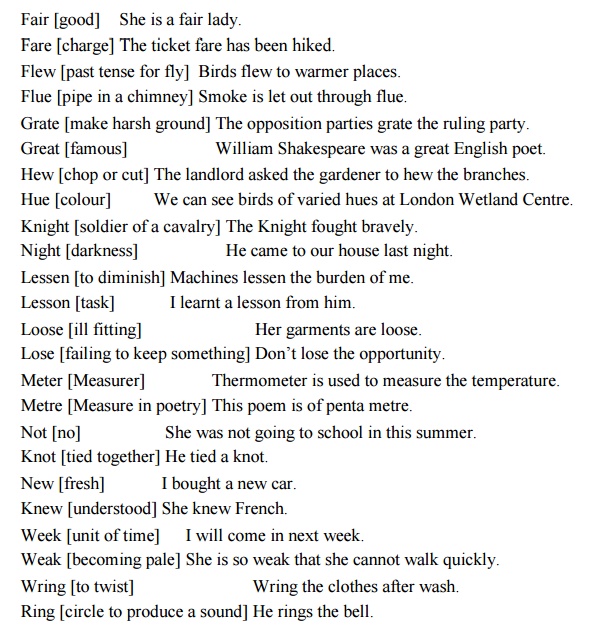 Weak [becoming pale] She is so weak that she cannot walk quickly.

Ring [circle to produce a sound] He rings the bell.