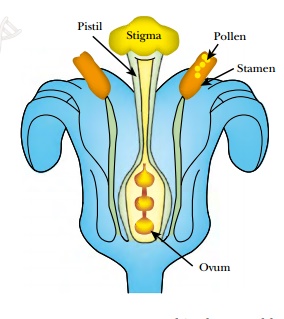 For thousands of years humans have improved crop plants and domestic animals by selective breeding, mostly at a trial-and-error level.

For thousands of years humans have improved crop plants and domestic animals by selective breeding, mostly at a trial-and-error level. Over many years, animal and crop breeders have learned that improving their crops and animals has a biological basis. In fact, the father of genetics, Gregor Mendel, experimented with the common pea. He studied easily identified traits such as round versus wrinkled seeds or yellow versus green seeds. Mendel would take the pollen from one plant and put it on the stigma of another plant (Fig. 14.1), a procedure called cross-pollination. His experiments showed that plants have some traits that may dominate others. For example, a cross between a yellow-seeded pea plant and a green-seeded pea plant gave only seeds that were yellow. This work was published in 1865, but no one understood the importance of these findings until well after Mendel’s death. 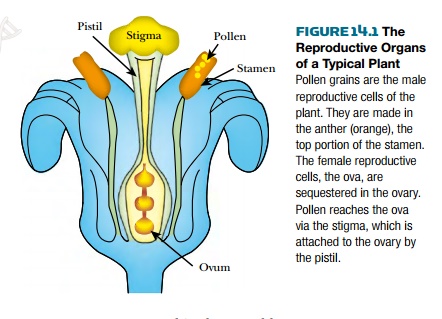 Many scientists around the world still use traditional breeding techniques to enhance crop yields, increase resistance to various pests or diseases, or increase the tolerance of a particular crop to heat, cold, drought, or wet conditions. Although simply crossing a high-yielding plant with another can produce offspring with even higher yields than either parent, the process is long and tedious. Many thousands of plants must be cross-pollinated to find the one offspring with higher yield. The crosses must be done by hand, that is, pollen must be taken from one plant and manually placed on another. In addition, the possibility of finding improved traits is limited by the amount of genetic diversity already present in the plants. Consequently, if the two plants that are crossed share many of the same genes, the amount of possible improvement is limited. If a plant has no genes for disease resistance, there is no way traditional cross-pollination will develop that trait. Therefore, scientists have searched for better ways to improve plants.

In the 1920s, scientists realized that mutations could be induced in seeds by using chemical mutagens or by exposure to X-rays or gamma rays. Although useful, the outcome of such treatments is even less predictable than traditional breeding methods. Nonetheless, mutation breeding has been successful, especially in the flower world. For example, new colors and more petals have been expressed in flowers such as tulips, snapdragons, roses, chrysanthemums, and many others. Mutation breeding has also been tried on vegetables, fruits, and crops. Some of the varieties of food we eat today were developed using this method. In short, a large number of seeds are exposed to the mutagen to generate various mutations in their DNA. The seeds are then planted and cultivated.

However, the majority of seeds are killed by the treatment. After the viable seeds are grown, the fruit, flower, or grain of the plant is tested for improvements. If one plant is found with a desirable trait, then its progeny are tested for the trait. Novel traits are only useful if they are heritable, that is, passed from one generation to the next. Because only one original mutant plant would gain any particular desirable trait, this plant would need to be propagated a long time before any of the fruit, grain, or flower would be sold to market. It is important to realize that the actual fruits or flowers sold to the consumer were never exposed to the mutagen. Today, chemical mutagens are still used, but molecular biology techniques are being used to identify the actual gene associated with the desired phenotype (see later discussion).

Recently, the emergence of molecular biology has opened the door to a much more predictable way to enhance crops. Scientists have discovered ways to move genes from foreign sources into a specific plant, resulting in a transgenic plant. The foreign gene, or transgene, may confer specific resistance to an insect, or protect the plant against a specific herbicide, or enhance the vitamin content of the crop. The major difference between transgenic technology and traditional breeding is that a plant can be transformed with a gene from any source, including animals, bacteria, or viruses as well as other plants, whereas traditional cross-breeding methods move genes only between members of a particular genus of plants. Furthermore, the transgene has a known function and has been evaluated extensively before being inserted in the plant. During traditional breeding, the identity of genes responsible for improving the crop is rarely known.