One of the main complaints about using transgenic technology in agriculture is the inclusion of the selectable marker or reporter gene. In particular, many consumers are concerned by the presence of a gene for antibiotic resistance in their food supply.

One of the main complaints about using transgenic technology in agriculture is the inclusion of the selectable marker or reporter gene. In particular, many consumers are concerned by the presence of a gene for antibiotic resistance in their food supply.

However, genetic techniques are available that allow removal of the reporter or resistance gene, after integration of the incoming DNA has been checked. 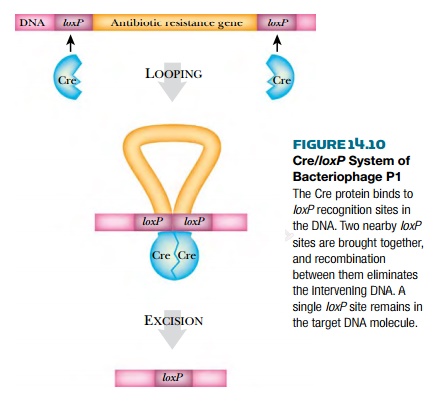 Bacteriophage P1, which naturally infects E. coli, has a simple system for genetic recombination, the Cre/loxP system. Cre stands for “causes recombination.” The Cre protein is a recombinase enzyme that recognizes a specific 34 base-pain DNA sequence, the loxP site.

The Cre protein catalyzes recombination between two loxP sites (Fig. 14.10). By placing two loxP sites on either side of a segment of DNA, the enclosed region may be deleted by Cre recombination.  To accomplish this, the cre gene is also included in the transgenic construct and is expressed when it is time to delete the unwanted DNA segment (see later discussion). This approach allows selectable marker genes to be removed from plant DNA after use. The segment of DNA that is recombined out of the chromosome has neither an origin of replication an nor any telomeres and will be either degraded or lost during mitosis and meiosis. 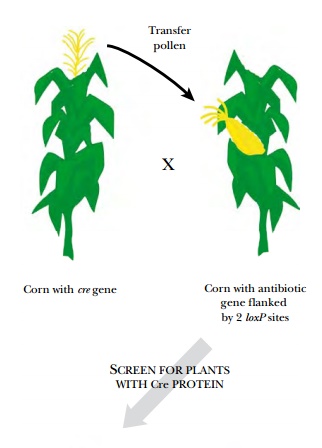 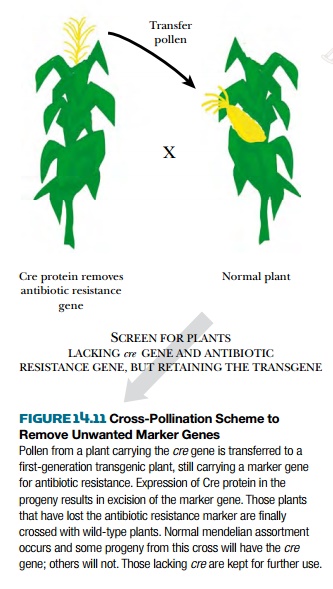 The cre gene can be added to the system by cross-pollination between two different plants, one carrying the transgene plus selectable marker flanked by two loxP sites and the other carrying the cre gene (inserted into a different location; Fig. 14.11). First the pollen from the plant with the cre gene is added to the stigma of the plant with the transgene. The resulting seeds are grown and checked for sensitivity to the selective agent (e.g., neomycin). If the Cre protein is present in the progeny, the selectable marker gene will be excised and lost during growth. This plant now has the transgene and the cre gene, but no longer has the gene for antibiotic resistance. If another cross is made between this transgenic plant and a wild-type plant, some of the progeny will have the transgene but lack the cre gene. Using a genetic scheme such as this will ensure that the final transgenic plant has only one extra gene, the transgene. This system has proven so easy and useful that every new variety of transgenic plant released to the public contains only the single transgene of interest.