Because the complete DNA sequences of rice, poplar tree, and Arabidopsis are known, plant scientists are following functional genomics strategies.

Because the complete DNA sequences of rice, poplar tree, and Arabidopsis are known, plant scientists are following functional genomics strategies. Rather than working on one specific gene, the entire genome can be screened. Most of this type of work is still done with Arabidopsis, but some has now moved into crop species such as rice, corn, and soybeans. Functional genomics in plants uses a variety of techniques, some of which have been discussed previously, but most rely on the removal or blockage of gene expression. Novel genes and metabolic pathways useful for understanding basic plant physiology are being analyzed in the hope of improving our current crops.

Insertions are one method to find the function of new genes. Transposons or T-DNA insertions are two methods used to generate plant mutants. Here, instead of including a transgene, the T-DNA or transposon includes only a reporter gene. When the T-DNA or transposon integrates into the plant chromosome, the insertion may disrupt a plant gene. When the insertion knocks out the function of a plant gene, the resulting phenotype can be screened and assessed. By cloning the regions upstream and downstream of the insertion, the plant gene that corresponds to the phenotype can be identified.

Gene silencing is another method to identify the function of plant genes. As described, gene silencing by RNA interference (RNAi) is a phenomenon that was originally described in plants. RNAi is triggered by double-stranded RNA, which is cut into short segments (siRNA, short-interfering RNA). The RISC enzyme complex uses siRNA to identify homologous RNA (in particular mRNA) and cut it up. This prevents mRNA from being expressed into protein. This is exploited in the laboratory by transforming a plant with small oligonucleotides that stimulate RISC to abolish the expression of a chosen gene. The plant can then be assessed for any visible phenotype associated with the gene knockdown.

Another method for generating gene knockouts is fast neutron mutagenesis. This uses fast neutrons to induce DNA deletions. Fast neutrons are created by nuclear processes such as nuclear fission, where free neutrons with a kinetic energy close to 1 MeV are generated. These neutrons cause deletions in exposed DNA. Therefore, seeds from the plant of interest exposed to fast neutrons acquire random mutations. The dose of fast neutrons and, consequently, the number of deletions per genome can be controlled. Seeds treated with fast neutrons, known as M1 seeds, are grown into plants. Each plant has a different deletion or set of deletions and a potentially different phenotype. 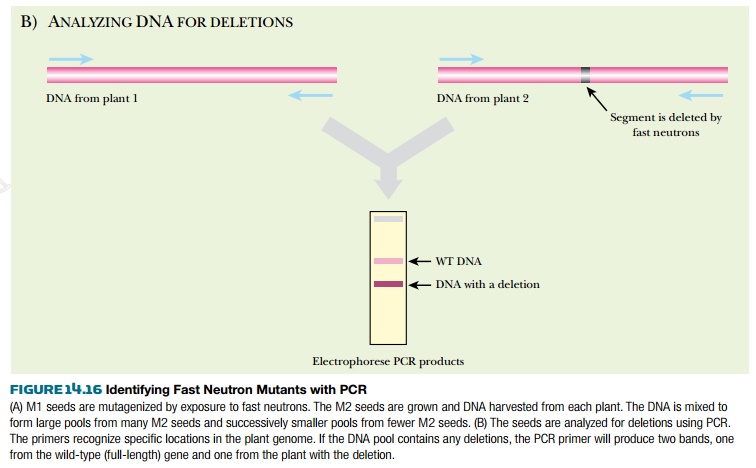 The seeds from each of these plants, called the M2 seeds, are collected. Most are saved as seed stock; the remaining M2 seeds are grown into plants. The DNA from the plants is isolated and collected into pools of varying sizes. For example, if the original pool had DNA from 100 plants, successively smaller pools of the 100 plants are made, down to just one or two plants per pool. These are usually screened by PCR to find specific genes with deletions. PCR primers are made to amplify a target gene from the largest pool of DNA. If a deletion was generated within the target gene in one of the plants, the PCR primers will amplify two bands, the wild-type gene plus a shorter segment from the deleted gene. The smaller DNA pools are then screened for the deletion until a specific M2 seed can be associated with the genetic deletion (Fig. 14.16).

Yet another method of creating plant mutations is called TILLING (targeting-induced local lesions in genomes; Fig. 14.17). First, point mutations are created in a collection of seeds by soaking them in a chemical mutagen, such as EMS (ethyl methane sulfonate), which induces G/C and A/T transitions in DNA. As before, the M1 seeds are grown into plants and the second-generation seeds (M2) are mainly saved as stocks. Some M2 seeds are grown and the DNA is harvested and pooled into a large megapool and successively smaller pools as described earlier. PCR primers are used to amplify selected regions of the DNA. The PCR primers carry fluorescent labels. Consequently, the PCR products are labeled with two different labels, one at either end. 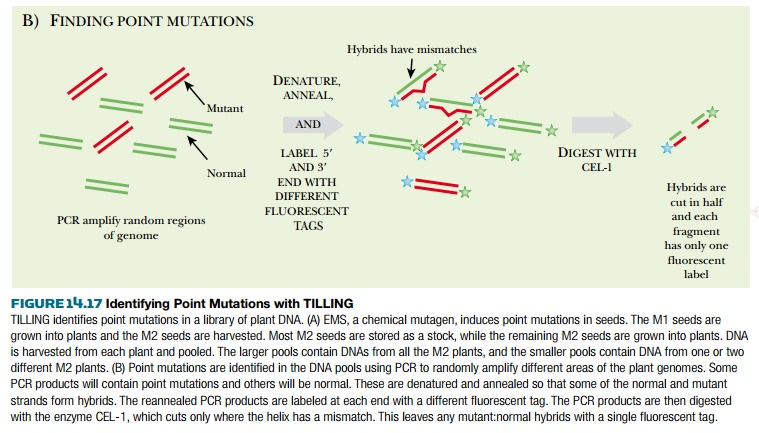 The key to identifying point mutations (as opposed to deletions) is to create heteroduplexes of mutant and wild-type DNA. Therefore, the PCR products are denatured to single strands and then slowly cooled so that the DNA strands reanneal. During reannealing, some mutant strands will anneal with wild-type strands and the heteroduplex will have a mismatched nucleotide. The enzyme CEL-1 cleaves mismatched DNA. If the PCR product is cleaved by CEL-1, it will have only one fluorescent label, whereas uncleaved DNA (with no mismatches) will have both fluorescent labels. When the PCR products are separated by gel electrophoresis, the digested mutant strands can be identified.