Hepatitis B Virus: Properties of the Virus

Hepatitis B virus is a major cause of infectious hepatitis worldwide. It is a hepadnavirus, which shows restricted host range and limited tissue tropism.

Hepatitis B virus is a major cause of infectious hepatitis worldwide. It is a hepadnavirus, which shows restricted host range and limited tissue tropism. The virus usually causes chronic disease and is associated with hepatocellular carcinoma. The term serum hepatitis was used after an outbreak of hepati-tis among American soldiers in 1942. The cause of outbreak was linked to yellow fever vaccine that was given to the soldiers which was contaminated by human serum. Blumberg and his colleagues in 1965 described the Australian antigen, which was later called hepatitis B surface antigen (HBsAg). DS Dane in 1970 was first to describe hepatitis B viral particle in human serum by electron microscopy.

·           It is partially double stranded, because its positive strand is incomplete. The complete negative strand possesses four genes: genes S, C, P, and X. The gene S codes for HBsAg and also for HBeAg (hepatitis B e antigen).

·            Although HBV is a DNA virus, the gene P codes for DNA poly-merase that has reverse transcriptase activity. Gene X codes for the X protein that has transcription-regulating activity.

·           The virion is a double-walled, spherical structure and measures 42 nm in diameter. It was first demonstrated by Dane in 1970 and so is known as Dane particle. By electron microscopy three types of particles can be seen in the serum from patients with hepatitis B. These are (i) spherical particles measuring 22 nm in diameter, (ii) filamentous or tubular particles with a diameter of 22 nm and of varying length, and (iii) double-walled, spherical structures measuring 42 nm in diameter. The former two particles are antigenically identical and are known as hepatitis B surfaceantigen, or HBsAg. The latter particle is the complete hepatitisviral particle known as Dane particle (Fig. 66-4). 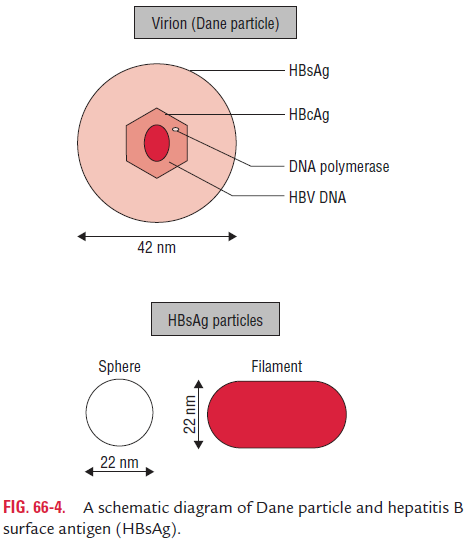 ·           The HBV consists of nucleocapsid which surrounds HBV DNA and DNA polymerase with reverse transcriptase and ribonuclease activity. The nucleocapsid also encloses a protein attached to genome, which is surrounded by hepati-tis B core antigen (HBcAg). The envelope which encloses the virus consists of HBsAg and also HBeAg.

HBsAg:This antigen consists of three glycoproteins, namelyS, L, and M. These glycoproteins are all encoded by same gene. The S glycoprotein is the major component of HBsAg, which self-associates into 22-nm spherical particles that are released from the cells. The filamentous particles of HBsAg found in the serum contain large amount of S and only small amount of L and M glycoprotein, and other proteins and lipids. The glyco-protein L is essential for virion assembly and for formation of filamentous particles and retention of the structures in the cell.

·           First, the virus shows a well-defined tropism for replication in the liver.

·           Second, although a DNA virus, it encodes reverse transcrip-tase and replicates though RNA intermediates.

The virus replicates in the nucleus of the cell. The virus infects hepatocytes, the attachment of which is mediated by HBsAg glycoprotein. The infection is initiated by the binding of HBsAg to serum albumin and other serum proteins, which subsequently causes the virus to infect the liver. Inside hepa-tocytes, the partial DNA strand of the genome is converted to covalently closed circular double-stranded DNA. Later on, this genome is transported to the nucleus of the cell.

The DNA acts as a template for all viral transcription including 3.5 kb pregenomic RNA. Subsequently, the genome is enclosed by virus capsular antigen. Within the core, both negative- and positive-strand DNA viruses are synthesized. Finally, the core buds from the membrane, acquiring HBsAg-containing envelope and is released from the infected cell.

HBsAg is antigenically complex. The HBsAg glycoprotein contains a group-specific antigen termed a and type-specific antigens termed d or y and w or r. Combination of these antigens results in four major subtypes of HBV (adw, adr, ayw, and ayr). These subtypes show distinct geographic distributions:

A total of eight genotypic variants (genotypes A, B, C, D, E, F, G, and H) of HBV have also been described. The prevalence of different genotypes varies in different countries. The infection caused by the genotype C is associated with rapid progression of the disease and poor response to antiviral treatment than caused by genotype D.

Hepatitis B virus is an extremely resistant virus capable of with-standing extreme temperature and humidity. It is stable when stored at 220°C for 15 years, at 280°C for 24 months, at 44°C for 7 days, at 37°C for 60 minutes, and at room temperature for 6 months. HBV, however, is sensitive to higher temperature and is killed rapidly after heating at 100°C for 1 minute and at 60°C for 10 hours.