Bunyaviridae viruses are large, spherical (80–120 nm in diam-eter), and have a triple-segmented and a single-stranded RNA.

Bunyaviridae viruses are large, spherical (80–120 nm in diam-eter), and have a triple-segmented and a single-stranded RNA. They have a helical nucleocapsid surrounded by an envelope. They replicate in the cytoplasm, and the assembly of the virion occurs by budding on smooth membrane of the Golgi system. Bunyaviridae viruses consist of more than 200 viruses. On the basis of structural and biochemical properties, they are classi-fied into four genera: Bunyavirus, Hantavirus, Nairovirus, and Phlebovirus. All these viruses, with the exception of hantaviruses,are arboviruses that are transmitted by mosquitoes, ticks, and flies. The hantaviruses, however, are transmitted by rodents.

Hantaviruses are spherical viruses measuring 90–120 nm in diameter. They include Hantann virus (Korean hemorrhagic fever), Seoul virus, and Sin Nombre virus. All these viruses cause hemorrhagic fever with nephropathy. These viruses are transmitted by close contact with rodents, such as mice and rats, and not by arthropod vectors. Transmission of infection occurs by inhalation of aerosolized excreta of the rodents.

A newly identified hantavirus, the Sin Nombre virus, is the causative agent of the hantavirus pulmonary syndrome, which was first identified in the United States in 1993. The infection is acquired by inhalation of aerosols of rodent excreta. No arthropods are responsible for the transmission of the disease.

Genus Phlebovirus includes more than 36 members including sandfly (Phlebotomus) fever virus and Rift Valley fever virus. All these viruses are transmitted by different arthropods, such as ticks, sandflies, and mosquitoes.

As the name suggests, the sandfly fever virus is transmitted by female species of sandfly Phlebotomus papatasi. The sandfly fever virus has 20 serotypes, of which only five cause human disease. These are Sicilian, Naples, Panta Toro, Chagrss, and Candine. Rift Valley fever virus is a primary pathogen of sheep and other domestic animals. This fever was originally described in Rift Valley, Kenya, and hence was designated as Rift Valley fever. Humans are secondarily infected on contact with infected sheep and other domestic animals. Humans acquire the infec-tion from these reservoir animals through the mosquito bites.

Bunyaviridae virus is surrounded by an envelope which contains two glycoproteins, G1 and G2. The capsule encloses three unique negative RNAs (large, L; medium, M; and small, S) that are associated with proteins to form nucleocapsid. The Bunyaviridae viruses unlike other negative-stranded RNA viruses do not have any matrix protein. They replicate in the cytoplasm of the infected cell in the same way as that of other enveloped and negative-stranded viruses.

Bunyaviridae viruses can infect humans and arthropods. Bite by an arthropod vector, such as mosquito, transmits infec-tion to humans. The virus from the site of infection spreads to the blood causing initial viremia, which may manifest in flu-like symptoms. Further dissemination of the viruses during the phase of secondary viremia may allow the viruses to reach target sites, such as liver, kidney, vascular endothelium, and CNS. In the CNS, many viruses cause neural and glial damage and cere-bral edema, leading to encephalitis. Other Bunyaviridae viruses, such as Rift Valley fever virus, may cause hepatic infection, whereas hantana hemorrhagic disease and Crimean–Congo hemorrhagic fever viruses cause hemorrhagic tissue destruction accompanied by hemorrhagic neurosis of the kidney.

Bunyaviruses usually cause a nonspecific febrile flu-like illness that is indistinguishable from illness caused by other viruses. The incubation period is usually short (48 hours), and the fever lasts approximately for 3 days.

California encephalitis virus, La Crosse virus, and Rift Valley fever cause encephalitis. The condition begins with a sud-den onset after an incubation period of nearly 1 week. Fever, lethargy, headache, and vomiting are the common symptoms. Seizers usually occur in nearly half of the patients with enceph-alitis. The condition may be associated with meningitis. The illness lasts for approximately 7 days. The condition is fatal in less than 1% of patients.

The sandfly fever has an incubation period of 3–5 days, after which the patients develop headache, malaise, fever, and nau-sea, which last for 3–4 days.

Crimean–Congo hemorrhagic fever and Rift Valley fever viruses cause hemorrhagic fever. The condition is character-ized by petechial hemorrhage, ecchymosis, hematemesis, and melena. Death occurs in 75% of patients with hemorrhagic manifestations.

The hantavirus typically causes hantavirus pulmonary syn-drome, which is more serious disease consisting of prodromal fever and muscle aches. The condition progresses rapidly to interstitial pulmonary edema, respiratory failure, and death within a few days. The hantaviruses cause hemorrhagic fever with renal syndrome. The cases resemble those of leptospirosis and scrub typhus.

Most of the bunyaviruses are distributed in Africa, South America, South-eastern Europe, and southern Asia. The sand-fly fever is distributed in Mediterranean countries and central Asia including India. These viruses are transmitted by arthro-pod vectors, such as mosquitoes, ticks, or Phlebotomus flies to rodents, birds, and larger animals, which are the usual reser-voirs of infection.

Humans acquire infection from the reservoir animals by arthropod vectors. The arthropods transmit the infection by biting on the skin.Aedes mosquitoes are responsible for transmission of California encephalitis virus and La Crosse virus. Flies, such as sandfly transmit Rift Valley fever virus and Sandfly fever virus. Ticks are the vectors for Crimean–Congo hemorrhagic fever.

Hantaviruses are not transmitted by any vectors; humans instead are infected by close contact with rodents or by inhalation of aerosolized rodent urine. The incidence of the disease caused by bunyaviruses correlates well with the distri-bution of vectors. The disease is more common during sum-mer months.

Serodiagnosis is most important in the laboratory diag-nosis of Bunyaviridae virus infection. ELISA for demonstra-tion of serum IgG or IgM antibodies is useful for diagnosis of bunyavirus infections. Demonstration of specific IgM antibody in a single serum or demonstration of a fourfold increase in the IgG antibody titer indicates recent infection. IgM ELISA is used for serodiagnosis of infection caused by hantaviruses. Demonstration of rising titers of hemaggluti-nating antibodies in paired sera is diagnostic of the disease. The ELISA for demonstration of antigen in the blood is also useful for diagnosis of patients with intense viremia, being observed in Crimean–Congo hemorrhagic fever, hantana hemorrhagic disease with renal syndrome, and Rift Valley fever. Molecular diagnosis is the recent method. The RT-PCR has been used to detect viral genomes in the tissues during the infection caused by the Sin Nombre and Convict Creek hantaviruses.

No specific antiviral therapy is available for bunyavirus infection. Avoidance of close contact of humans with arthro-pod vectors, such as mosquitoes, ticks, or Phlebotomus flies prevents transmission of infection caused by bunyaviruses. Arthropod vector control measures include use of insecticides, wearing protective gloves and clothing, use of net and screens, and control of tick infestation of animals. Control of rodent population minimizes the transmission of infection caused by hantaviruses. Human diseases associated with Bunyaviridae viruses are summarized in Table 65-2. 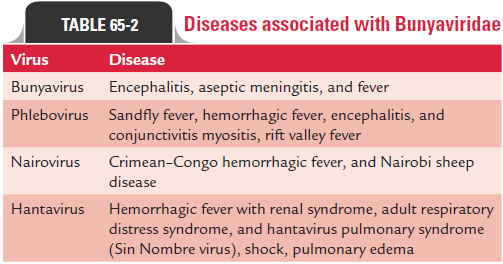