Arboviruses are RNA viruses that are transmitted by arthropods.

Arboviruses are RNA viruses that are transmitted by arthro-pods. The word arbovirus is an acronym for arthropod-borne viruses that are transmitted by arthropods, from one verte-brate host to another. Arbovirus is a collective name for a large group of viruses of which about 100 are known human patho- gens. Most of the arboviruses causing infections in humans are zoonotic, with humans acting as accidental host. Humans play an important role in the maintenance or transmission of the virus in the cycle. Yellow fever virus and dengue virus are two exceptions, which are not zoonotic. The viruses multiply in tissues of the arthropod host without producing any disease. Some arboviruses are maintained in nature by transovarian transmission in arthropods.

Arboviruses were named initially, according to the disease they cause, such as yellow fever virus, or depending upon the place from where they were first isolated, e.g., West Nile fever and St. Louis encephalitis. Taxonomically, most arboviruses and roboviruses are recently classified into five families, namely, Togaviridae, Flaviviridae, Bunyaviridae, Reoviridae, and Rhabdoviridae. Most viruses of medical importance are included in the family Togaviridae, some belong to family Flaviviridae, and some to families Reoviridae and Rhabdoviridae. 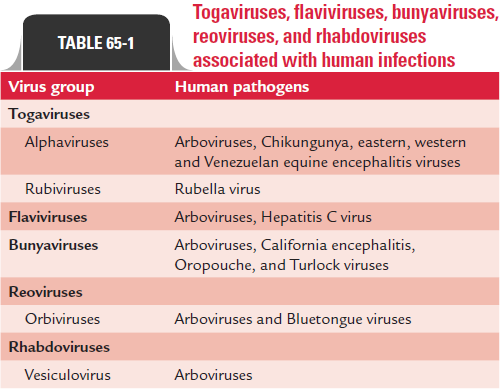