Graph and its representations - Tree

Graph and its representations

Graph is a data structure that consists of following two components:

1. A finite set of vertices also called as nodes.

A finite set of ordered pair of the form (u, v) called as edge. The pair is ordered because (u, v) is not same as (v, u) in case of directed graph(di-graph). The pair of form (u, v) indicates that there is an edge from vertex u to vertex v. The edges may contain weight/value/cost. Graphs are used to represent many real life applications: Graphs are used to represent networks. The networks may include paths in a city or telephone network or circuit network. Graphs are also used in social networks like linkedIn, facebook. For example, in facebook, each person is represented with a vertex(or node). Each node is a structure and contains information like person id, name, gender and locale. Following is an example undirected graph with 5 vertices. 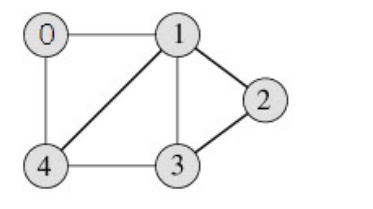 Following two are the most commonly used representations of graph.

There are other representations also like, Incidence Matrix and Incidence List. The choice of the graph representation is situation specific. It totally depends on the type of operations to be performed and ease of use. 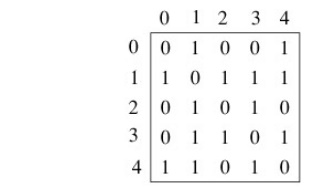 Adjacency Matrix Representation of the above graph

Pros: Representation is easier to implement and follow. Removing an edge takes O(1) time. Queries like whether there is an edge from vertex „u‟ to vertex „v‟ are efficient and can be

Cons: Consumes more space O(V^2). Even if the graph is sparse(contains less number of edges), it consumes the same space. Adding a vertex is O(V^2) time.

Below is C code for adjacency list representation of an undirected graph:

// A C Program to demonstrate adjacency list representation of graphs

//A structure to represent an adjacency liat

//  A structure to represent a graph. A graph is an array of adjacency lists.

//  Size of array will be V (number of vertices in graph)

//  A utility function to create a new adjacency list node

//A utility function that creates a graph of V vertices

//  Create an array of adjacency lists. Size of array will be V

//Initialize each adjacency list as empty by making head as NULL inti;

//  Adds an edge to an undirected graph

//  Add an edge from src to dest. A new node is added to the adjacency

//  list of src. The node is added at the begining

//Since graph is undirected, add an edge from dest to src also

//A utility function to print the adjacenncy list representation of graph

//Driver program to test above functions

//create the graph given in above fugure

//print the adjacency list representation of the above graph

Cons: Queries like whether there is an edge from vertex u to vertex v are not efficient and can be done O(V).