An adjective is a word that describes or modifies a noun.

An adjective is a word that describes or modifies a noun.

show the kind or quality of a person or thing.

Kolkata is a large city. He is an honest man.

This is the Grammar of the English language.

Adjectives of Quality answer the question : Of what kind ?

describe the quantity of something.

I ate some rice.

He showed much patience.

He has little intelligence.

We have had enough exercise.

He has lost all his wealth.

You have no sense.

He did not eat any rice.

Take great care of your health.

There has not been sufficient rain this year.

The whole sum was expended.

Adjectives of Quantity answer the question: How much?

show how many persons or things are meant, or in what order a person or thing stands.

Each hand has five fingers.

There are no pictures in this book. I have taught you many things.

All men must die.

Here are some ripe mangoes. Most boys like cricket.

There are several mistakes in your exercise.

Sunday is the first day of the week

point to "which" noun or pronoun you're speaking about. These four words will help you spot demonstrative adjectives -this, that, these, those.

This lady is stronger than Maha. That boy is industrious.

These books are good.

Those girls must be encouraged.

Demonstrative Adjectives answer the question: Which?

Interrogative adjectives pose a question. They need a noun or pronoun by their side.

What manner of man is he? Which way shall we go?

Whose book is this? 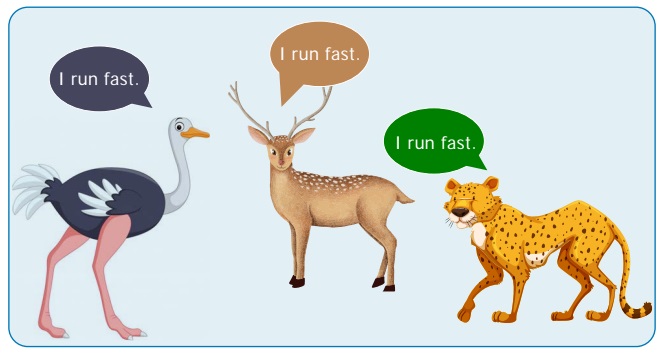 Oh! They all say that they run fast. So who will win a race?

We need to compare their speed to help them decide. For example let us think that the ostrich runs at 40 km/hr, the deer at 60 km/hr and the cheetah at 80 km/hr.

There are three ways to compare. That is positive, comparative and superlative. These are known as degrees of comparison.

Now, let us see how the word 'fast' changes to show us how fast each of them run.

The deer runs faster than the ostrich.

The cheetah is the fastest of all.

comparison to the other.

So, the cheetah, the fastest of all will win the race.

We add - er with the adjective to make it comparative and - est to make it superlative. Let us see some examples:

For most one syllable adjectives you make the comparative form by adding -er and - est for superlative form.

If the adjective already ends in e, you just add -r.

One syllable adjectives ending in e

For some adjectives you need to double the last letter before you add -er. You do this when the last three letters of the word have the pattern consonant-vowel-consonant.

One syllable adjectives that need a double letter

For adjectives ending in y, you make the comparative form by changing the y to an i, then adding -er.

For most words with two syllables or more, you make the comparative form by adding the word more before the adjective.

a. Fill in the blanks

Answer: A plane is faster than a train.

2. Which is cheaper? Gold or Silver?

Answer: Silver is cheaper than gold.

3. Which is larger? City or village?

Answer: A city is larger than a village.

Answer: An ocean is bigger than a sea.

5. Which is taller? A giraffe or a camel?

Answer: A giraffe is taller than a camel.

A donkey - a horse - an elephant (strong)

A donkey is strong.

A horse is stronger than a donkey.

An elephant is the strongest.

Answer: A city is quiet.

Town is quieter than the city.

The village is the quietest.

Moscow is more populated than Istanbul.

London is the most populated.

Rainy weather is the best.

Lake is deeper than the river.

Ocean is the deepest.

Answer: Spain is a large country.

The USA is larger than Spain.

Russia is the largest country.

Answer: The Cauvery is a long river.

The Mahanadi is longer than the Cauvery.

The Ganga is the longest river in our country.

Answer: Chennai is a modern city.

Hyderabad is more modern than Chennai.

Bengaluru is the most modern city.

Answer: Giraffe is the tallest animal.

The horse is taller than a goat.

Goat is not as tall as a horse.

Answer: An elephant is the strongest animal.

A dog is stronger than a cat.

A cat is not as strong as a dog.

Answer: Maharastra is not as hot as Tamilnadu.

Tamilnadu is hotter than Maharastra.

Rajasthan is the hottest state.