Hobby Turns into a Successful Career

The hard working and the passionate people, always chase their dream and live it. Ilavazhagi is one among the many to achieve her dream amidst all odds. Mr. A. Irudayaraj, her father, was a district level champion in carrom. His dream shattered, since his family did not encourage and support him. He was determined to achieve his dream through his daughter. He used to put his daughter on the carrom board, while she listened to the sounds of striker and coins. When she was two years old, he would carry her with him to the tournaments; he played with his friends at local clubs. Her father began coaching her when she was around five. One day her father called her for a match, and she won that match, which gave her confidence. The confidence led her to win. Her victories included the Asia Cup and (South Asian Association for Regional Cooperation) Cup and the world championship. 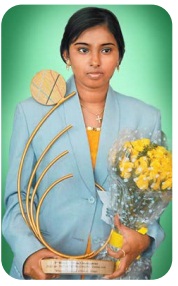 Irudhayaraj, a fish-cart driver who transports materials like pipes to make a living for his family – a wife and three daughters. They lived in a small one-room apartment in Vyasarpadi, Chennai, is not enough to accommodate the family. The trophies, she has won over the years are too many, and her home is just not big enough to keep them. The trophies left over after filling the space under the bed, were given to the neighbours and relatives. Financing the trips has always been a big trouble, though she has been playing for the state for almost 14 years. Still she says "Victories follow me".

Ilavazhagi is a member of the Thiruvallur District Carrom Association and also represented India at the Carrom World Championships, Asian Championships.

6. World Cup winner in 2006 and the next was the 2010 championship in the US where she secured the first place in singles and doubles.

She holds 260 medals, out of which 106 are gold, 17 are silver & 12 are bronze medals won in national competitions. She has won 111 gold, 9 silver and 5 bronze medals in international tournaments.

Her hobby of playing carrom took her to the level of world champion.

trophies (n) – a decorative cup given as a token of victory