Geometric modeling is a part of computational geometry and applied mathematics that studies algorithms and techniques for the mathematical description of shapes.

Geometric modeling is a part of computational geometry and applied mathematics that studies algorithms and techniques for the mathematical description of shapes.

The shapes defined in geometric modeling are generally 2D or 3D, even though several of its principles and tools can be used to sets of any finite dimension. Geometric modeling is created with computer based applications. 2D models are significant in computer technical drawing and typography. 3D models are fundamental to CAD and CAM and extensively used in many applied technical branches such as civil engineering and mechanical engineering and medical image processing.

Geometric models are commonly differentiated from object oriented models and procedural, which describe the shape perfectly by an opaque algorithm that creates its appearance. They are also compared with volumetric models and digital images which shows the shape as a subset of a regular partition of space; and with fractal models that provide an infinitely recursive description of the shape. Though, these differences are often fuzzy: for example, a image can be interpreted as a collection of colored squares; and geometric shape of circles are defined by implicit mathematical equations. Also, a fractal model gives a parametric model when its recursive description is truncated to a finite depth.

a topological space which is internally homeomorphism to a line; this shows that a curve is a set of points which close to each of its points looks like a line, up to a deformation.

There are several of added geometric definitions possible. One of the most practical, in that it involves only the plane, is that a non circular conic has those points whose distances to various point, called a ‘focus’,and several line, called a ‘directrix’,are in a fixed ratio, called the ‘eccentricity’. 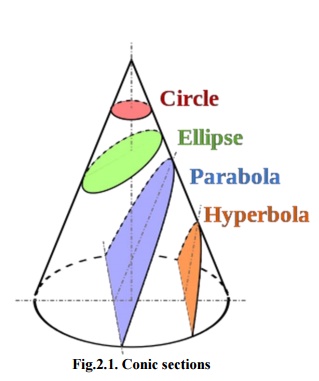 The three kinds of conic sections are the ellipse, parabola, and hyperbola. The circle can be taken as a fourth kind of ellipse. The circle and the ellipse occur when the intersection of plane and cone is a closed curve. The circle is generated when the cutting plane is parallel to the generating of the cone. If the cutting plane is parallel to accurately one generating line of the cone, then the conic is unbounded and is mentioned a parabola. In the other case, the figure is a hyperbola.

Different factors are connected with a conic section, as shown in the Table 2.1. For the ellipse, the table shows the case of ‘a’> ‘b’, for which the major axis is horizontal; for the other case, interchange the symbols ‘a’and ‘b’.For the hyperbola the east-west opening case is specified. In all cases, ‘a’nd ‘b’are positive.

i. Linear eccentricity (c) is the space between the center and the focus.

ii.Latus rectum (2l) is parallel to the directrix and passing via the focus.

A Hermite curve is a spline where every piece is a third degree polynomial defined in Hermite form: that is, by its values and initial derivatives at the end points of the equivalent domain interval. Cubic Hermite splines are normally used for interpolation of numeric values defined at certain dispute values x1,x2,x3, …..xn,to achieve a smooth continuous function. The data should have the preferred function value and derivative at each Xk. The Hermite formula is used to every interval (Xk,

Xk+1) individually. The resulting spline become continuous and will have first derivative.

Cubic polynomial splines are specially used in computer geometric modeling to attain curves that pass via defined points of the plane in 3D space. In these purposes, each coordinate of the plane is individually interpolated by a cubic spline function of a divided parameter‘t’.

Cubic splines can be completed to functions of different parameters, in several ways. Bicubic splines are frequently used to interpolate data on a common rectangular grid, such as pixel values in a digital picture. Bicubic surface patches, described by three bicubic splines, are an necessary tool in computer graphics. Hermite curves are simple to calculate but also more powerful. They are used to well interpolate between key points. 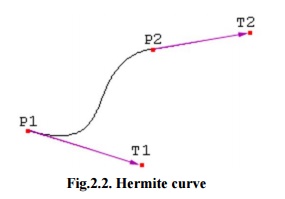 The following vectors needs to compute a Hermite curve: 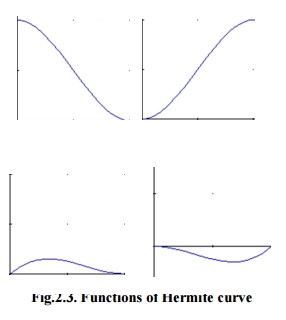 ‘h3’and function ‘h4’are used to the tangents in the similar way. They make confident that the Hermite curve bends in the desired direction at the start and endpoint.

Bezier curves are extensively applied in CAD to model smooth curves. As the curve is totally limited in the convex hull of its control points P0, P1,P2 & P3, the points can be graphically represented and applied to manipulate the curve logically. The control points P0 and P3 of the polygon lie on the curve (Fig.2.4.). The other two vertices described the order, derivatives and curve shape. The Bezier curve is commonly tangent to first and last vertices. 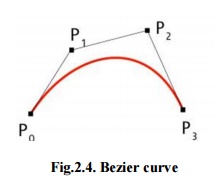 A general adaptive method is recursive subdivision, in which a curve's control points are verified to view if the curve approximates a line segment to within a low tolerance. If not, the curve is further divided parametrically into two segments, 0 ≤t ≤0.5 and 0.5 ≤ ≤t1, and the same process is used recursively to each half. There are future promote differencing techniques, but more care must be taken to analyze error transmission.

Analytical methods where a Bezier is intersected with every scan line engage finding roots of cubic polynomials and having with multiple roots, so they are not often applied in practice. A Bezier curve is described by a set of control points P0 through Pn, where ‘n’is order of curve. The initial and end control points are commonly the end points of the curve; but, the intermediate control points normally do not lie on the curve. 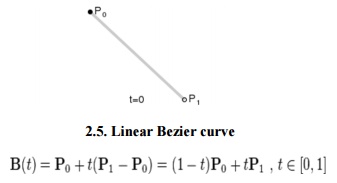 As shown in the figure 2.5, the given points P0 and P1, a linear Bezier curve is merely a straight line between those two points. The Bezier curve is represented by And it is similar to linear interpolation. 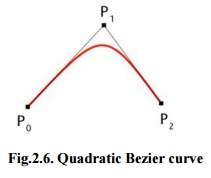 As shown in the figure 2.6, a quadratic Bezier curve is the path defined by the function B(t), given points P0, P1, and P2,

This can be interpreted as the linear interpolate of respective points on the linear Bezier curves from P0 to P1 and from P1 to P2 respectively. Reshuffle the preceding equation gives:

The following equation is a second derivative of the Bezier curve with respect to ‘t’:

As shown in figure 2.7, four control points P0, P1, P2 and P3 in the higher-dimensional space describe as a Cubic Bezier curve. The curve begins at P0 going on the way to P1 and reaches at P3 coming from the direction of P2. Typically, it will not pass through control points P1 / P2, these points are only there to give directional data. The distance between P0 and P1 determines ‘how fast’and ‘how far’the curve travels towards P1 before turning towards P2. 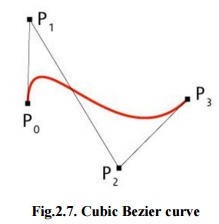 For several choices of P1  and P2  the Bezier curve may meet itself.

Any sequence of any four dissimilar points can be changed to a cubic Bezier curve that goes via all four points in order. Given the beginning and ending point of a few cubic Bezier curve, and the points beside the curve equivalent to t = 1/3 and t = 2/3, the control points for the original Bezier curve can be improved.

The following equation represent first derivative of the cubic Bezier curve with respect to t:

The following equation represent second derivative of the Bezier curve with respect to t:

·       The Bezier curve starts at P0  and ends at Pn; this is known as ‘endpoint interpolation’property.

·       The Bezier curve is a straight line when all the control points of a cure are collinear.

·       A Bezier curve can be divided at any point into two sub curves, each of which is also a Bezier curve.

·       A few curves that look like simple, such as the circle, cannot be expressed accurately by a Bezier; via four piece cubic Bezier curve can similar a circle, with a maximum radial error of less than one part in a thousand (Fig.2.8). 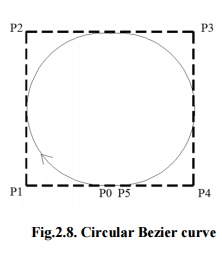 Bezier curves have the different diminishing property. A Bezier curves does not ‘ripple’more than the polygon of its control points, and may actually ‘ripple’lss than that.

·       Bezier curve is similar with respect to t and (1-t). This represents that the sequence of control points defining the curve can be changes without modify of the curve shape.

·       Bezier curve shape can be edited by either modifying one or more vertices of its polygon or by keeping the polygon unchanged or simplifying multiple coincident points at a vertex (Fig .2.19). 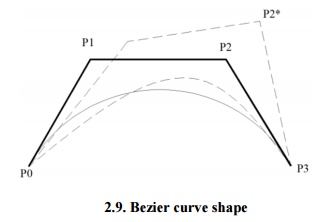 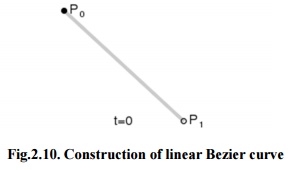 ·       Point B (t) is interpolated linearly between Q0(t) to Q1(t) and expresses a quadratic Bezier curve. 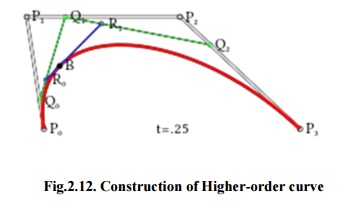 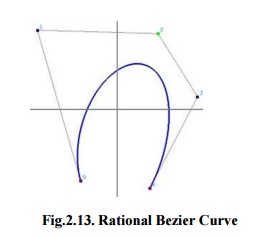