A biotechnological improvement of the acellular pertussis vaccine has been the switch from chemically to genetically inactivated pertussis toxin. The princi-ple of both chemical and genetic inactivation is schematically illustrated in Figure 6. Chemical treat-ment with formaldehyde results in a cripple protein molecule with partial loss of conformational and antigenic properties (Fig. 6B). This reduces its immunogenicity, whereas potential reversal to a biologically active toxin is a major concern. Variations in the extent of detoxification can affect both the immunogenicity and the toxicity of the product. In contrast, genetic detoxification by site-directed mutagenesis warrants the reproducible pro-duction of a non-toxic mutant protein that is highly immunogenic because the integrity of immunogenic sites is fully retained (Fig. 6C). In the pertussis toxin example, codons for two amino acids were mutated in the cloned pertussis gene, which abolished the

toxicity of the protein without changing its immuno-logical properties. The altered gene was then sub-stituted in Bordetella pertussis for the native gene (Nencioni et al., 1990). Other candidates for genetic detoxification are diphtheria toxin, tetanus toxin, and cholera toxin. 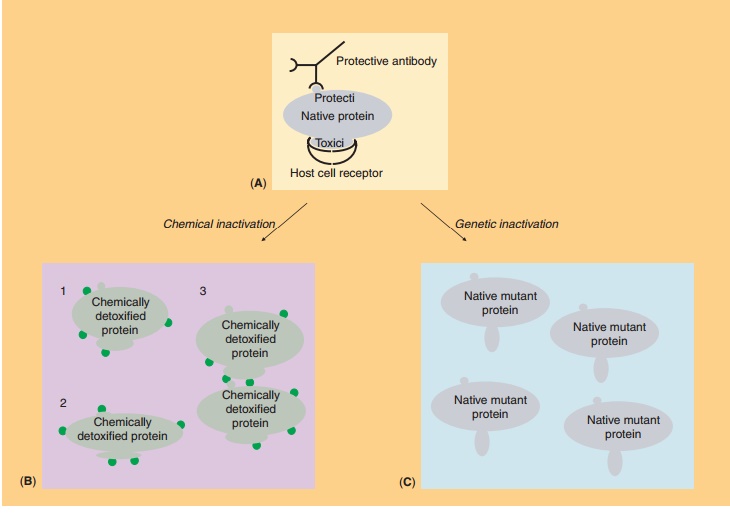 To improve the yield, facilitate the production, and/or improve the safety of protein-based vaccines, protein antigens are sometimes expressed by host cells of the same (homologous) species or of different (hetero-logous) species that are safe to handle and/or allow high expression levels.

Heterologous hosts used for the expression of immunogenic proteins include yeasts, bacteria, and mammalian cell lines. Hepatitis B surface antigen (HBsAg), which previously was obtained from plas-ma of infected individuals, has been expressed in bakers’ yeast (Saccharomyces cerevisae); (Valenzuela et al., 1982; Vanlandschoot et al., 2002) and in mammalian cells (Chinese hamster ovary cells) (Burnette et al., 1985; Raz et al., 2001) by transforming the host cell with a plasmid containing the HBsAg-encoding gene. Both expression systems yield 22-nm HBsAg particles (also called virus like particles or VLPs) that are structurally identical to the native virus. Advantages are safety, consistent quality, and high yields. The yeast-derived vaccine has become available worldwide and appears to be as safe and efficacious as the classical plasma-derived vaccine.

The experimental multivalent meningococcal vesicle vaccine is an example of the expression of multiple antigens in homologous host cells (van der Ley et al., 1995). The vaccine is prepared by extraction of vesicles from the meningococcal outer membrane. These vesicles serve as a natural carrier for immunogenic outer membrane proteins (OMPs), which are incorporated into the vesicle membrane. Each wild-type meningococcus strain expresses strain-specific OMPs. Taking a wild-type strain as starting point, mutant strains expressing OMPs specific for three strains have been made through transformation with plasmid constructs in Escherichia coli and their recombination into the meningococcal chromosome. Outer membrane vesi-cles of two trivalent strains have been prepared and combined to a hexavalent vaccine, which has been shown to be immunogenic in infants (Cartwright et al., 1999).

An interesting development is the exploration of transgenic plants for their potential as heterologous expression system for antigenic components (Sala et al., 2003). The aim of this approach is to express antigenic components in edible (parts of) plants, such as bananas. Advantages of edible vaccines include: (i)no need for purification, (ii) ease of immunization, (iii)built-in protection  of  antigens  by  cell  walls  andcellular  membranes,  and  (iv)  possibility  of  localproduction in developing countries. Problems relatedwith the production of edible vaccines are the lowexpression levels and the control of the level andquality of the antigen. Examples of candidate vaccinecomponents are VLPs, such as HBsAg and Norwalkvirus capsid protein, which have entered into clinicaltrials.

After identification of a protective epitope, it is possi-ble to incorporate the corresponding peptide sequence through genetic fusion into a carrier protein, such as HBsAg, hepatitis B core antigen, and β-galactosidase (Francis and Larche, 2005). The peptide-encoding DNA sequence is synthesized and inserted into the carrier protein gene. An example of the recombinant peptide approach is a malaria vaccine based on a 16-fold repeat of the Asn-Ala-Asn-Pro sequence of a Plasmodium falciparum surface antigen. The gene encoding this peptide was fused with the HBsAg gene and the fusion product was expressed by yeast cells (Vreden et al., 1991). Genetic fusion of peptides with proteins offers the possibility to produce protective epitopes of toxic antigens derived from pathogenic species as part of non-toxic proteins expressed byharmless species. Furthermore, a uniform product is obtained in comparison with the variability of chemical conjugates (see following section “Synthetic Peptide-Based Vaccines”).

Another form of molecular mimicry are synthetic peptides, which can be obtained by solid phase synthesis. Primarily, peptide-based vaccines have been designed based on antibody recognition. Two approaches can be discerned, as outlined in Figure 7, depending on whether the epitope is continuous or discontinuous. 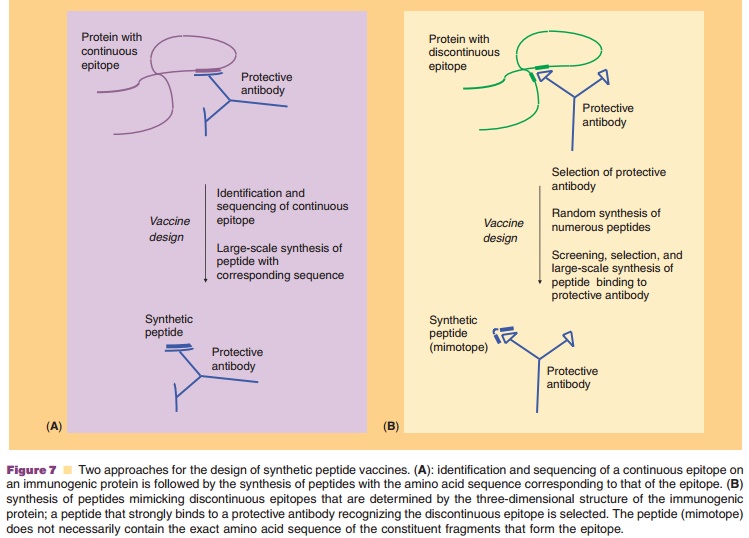 In the first approach (Fig. 7A) immunogenic epitopes are determined by DNA cloning and nucleotide sequencing of protein antigens, and serol-ogy studies. The small linear peptide sequence isMAPs containing multiple copies of a single epitope, multivalent peptides consisting of different covalently linked epitopes can be constructed, including combi-nations of B-cell and T-cell epitopes. Examples of increased immunogenicity of synthetic MAPs are experimental malaria vaccines consisting of combined B-cell and T-cell epitopes (Tam, 1996) or diepitope multiple antigen peptides with the sequence of a repetitive Plasmodium falciparum surface antigen epi-tope (Vasconcelos et al., 2004). A convincing success of a synthetic peptide-carrier protein vaccine in vivo was reported by Langeveld et al. (Langeveld et al., 1994). Peptides with the sequence of the amino-terminal region of protein VP2 of canine parvovirus were synthesized and chemically coupled to a protein (keyhole limpet hemocyanin). This vaccine induced full protection against virulent virus in dogs. 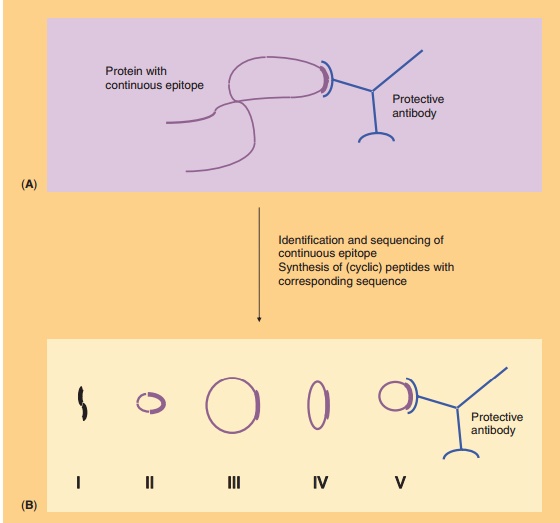 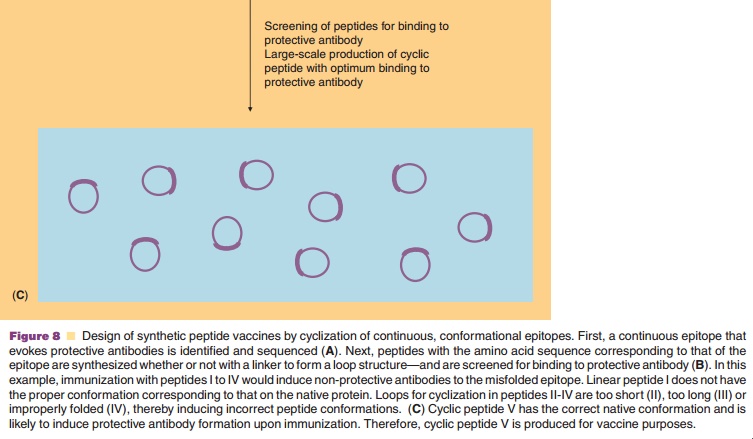 A revolutionary application of rDNA technology in vaccinology has been the introduction of nucleic acid vaccines (Davis and Whalen, 1995; Donnelly et al., 2005). In this approach plasmid DNA or messenger RNA encoding the desired antigen is directly admi-nistered into the vaccinee. The foreign protein is then expressed by the host cells and generates an immune response.

Plasmid DNA is produced by replication in E. coli or other bacterial cells and purification by established methods (e.g., density gradient centrifu-gation, ion-exchange chromatography). Up until nowplasmid DNA has been administered to animals and humans mostly via intramuscular injection. The favorable properties of muscle cells for DNA expres-sion are probably due to their relatively low turn-over rate, which prevents that plasmid DNA is rapidly dispersed in dividing cells. After intracellular uptake of the DNA, the encoded protein is expressed on the surface of host cells. After a single injection, the expression can last for more than one year. Besides intramuscular injection, subcutaneous, intradermal, and intranasal administrations also seem to be effective. Needleless injection into the skin of DNA-coated gold nanoparticles via a gene gun has been reported to require up to 1000-fold less DNA when compared to intramuscular administration.

Nucleic acid vaccines offer the safety of subunit vaccines and the advantages of live recombinant vaccines. They can induce strong CTL responses against the encoded antigen. In addition, bacterial plasmids are also ideal for activating innate immunity as TLR-9 expressed on many phagocytic cells can recognize unmethylated bacterial DNA. Possible disadvantages of nucleic acid immunization concern acceptability issues. In particular, the long-term safety of nucleic acid vaccines remains to be established. The main pros and cons of nucleic acid vaccines are listed in Table 6. An advantage of RNA over DNA is that it is not able to incorporate into host DNA. A drawback of RNA, however, is that it is less stable than DNA. Nucleic acids coding for a variety of antigens have shown to induce protective, long-lived humoral and cellular immune responses in various species includ-ing man. Examples of DNA vaccines that have been tested in clinical trials comprise plasmids encoding HIV-1 antigens and malaria antigens. 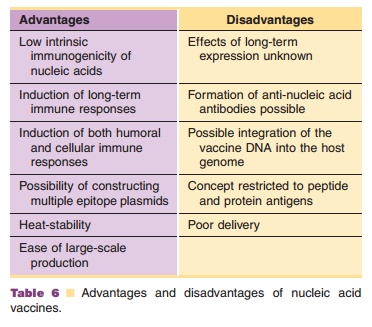