The adaptive immune system is involved in elimina-tion of pathogens in the late phase of infection and in the generation of immunological memory.

The adaptive immune system is involved in elimina-tion of pathogens in the late phase of infection and in the generation of immunological memory. It consists of B- andsystem can be divided into humoral and cell-mediated immunity (CMI) (Fig. 4 and Table 3). The humoral response results in antibody formation (but contains cell-mediated events, Fig. 4A,B); CMI results in the generation of cytotoxic cells (Fig. 4A,B). The actionof antibodies and T-cells is dependent on accessory factors, some of which are mentioned in Table 3. In general, after infection with a pathogen or a protective vaccine, both humoral and cellular responses are generated. This indicates that both are needed for efficient protection. The balance between humoral and cellular responses, however, can differ widely between pathogens and is dependent on how the pathogen is presented to the adaptive immune system by APCs. This may have consequences for the design of a particular vaccine (see section “Vaccine design in relation to the immune response”). 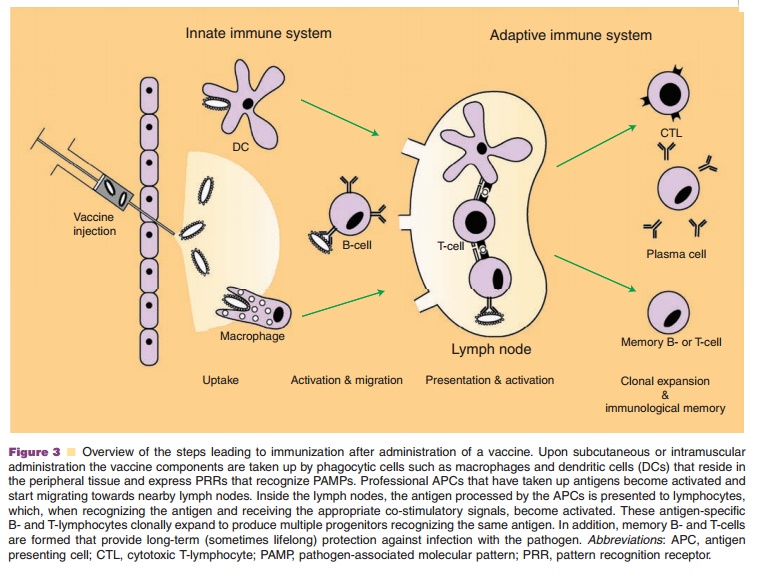 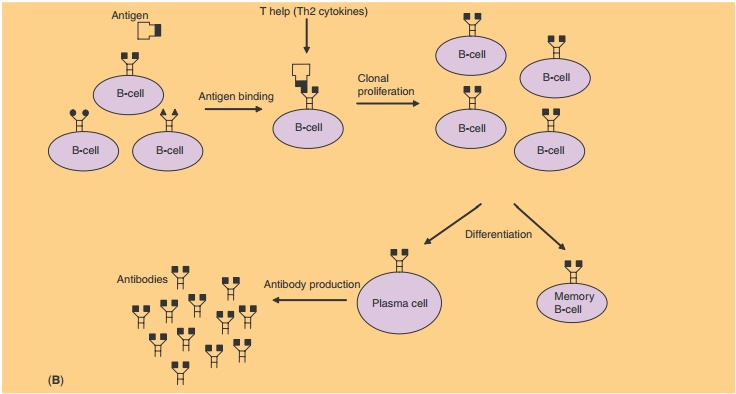 Antibodies are the typical representatives of humoral immunity. An antibody belongs to one of four different immunoglobulin classes (IgM, IgG, IgA, or IgE). Upon immunization, the B-cells expressing specific antibodies on their cell surface (representing a fifth immunoglobulin class, IgD) are activated. The surface-bound antibodies bind specific epitopes of the pathogen, and in close cooperation with T-helper cells (Th-cells), the B-cell becomes activated eventually resulting in massive clonal proliferation. The prolif-erated B-cells are called plasma cells and excrete large amounts of soluble antibodies (Fig. 4B). Antibodies are able to prevent infection or disease by several mechanisms:

1.     Binding of antibody covers the antigen with Fc (constant fragment), the “rear-end” of immunoglo-bulins. Phagocytic cells, like macrophages express surface receptors for Fc. This allows targeting of the opsonized (antibody-coated) antigen to these cells, followed by enhanced phagocytosis.

2.     Immune complexes (i.e., antibodies bound to target antigens) can activate complement, a system of proteins which then becomes cytolytic to bacteria, enveloped viruses or infected cells.

4.     Viruses can be neutralized by antibodies through binding at or near receptor binding sites on the virus surface. This may prevent binding to and entry into the host cell.

Antibodies are effective against certain but not all infectious microorganisms; they may have limited value when CMI is the major protective mechanism. Of the cell types that are known to exhibit cytotoxicity, two are antigen-sensitized. Because of their specificity, they are of special importance with respect to vaccine design:

1.     Cytotoxic T-lymphocytes (CTLs) react with target cells and kill them by release of cytolytic proteins like perforin. Target cells express non-self anti-gens like viral proteins or tumor antigens, by which they are identified. CTL responses, as antibody responses, are highly specific.

2.     T-cells involved in delayed type hypersensitivity (TDTH) are able to kill target cells as CTLs do, but also have helper (Th1-type, see below) functions that enable them to activate macrophages.

Besides plasma cells and cytotoxic cells, in many cases memory B- and T-cells develop. Memory B-cells do not produce soluble antibody, but on repeated antigen contact their response time to develop into antibody-excreting plasma cells is shorter compared to naı¨ve B-cells.

The occurrence of different types of immune response to vaccines is the result of differences in antigen processing of the vaccine by APCs and, as a result, in the activation of Th-cells (Figs. 3 and 4). Major histocompatibility complex (MHC) molecules play an important role in the presentation of processed antigens to T-cells. Cells expose either MHC class I or II molecules on their surface.

APCs carrying class II molecules process solu-ble, exogenous (extracellular) proteins or more com-plicated structures such as microorganisms (Fig. 4A). After their endocytosis, the proteins are subject to limited proteolysis before they return as peptides to the surface of the APC in combination with the class II molecules for presentation to a T-cell receptor (TCR) of CD4 positive Th-cells. The Th-cells provide type 2 help necessary for the effector function of B-cells. This type 2 help is characterized by the lymphokine pattern produced: interleukin-4 (IL-4), IL-5, IL-6, IL-10, and IL-13. These lymphokines trigger B-cells, which eventually results in the production of IgM and IgG antibodies Cells carrying MHC class I molecules process endogenous (intracellularly produced) antigens like viral and tumor antigens, and present them in combination with class I molecules on the cell surface (Fig. 4C). The class I-antigen combination on the APC is recognized by the TCR of CD8 positive CTLs. Th-cells provide help for the CTLs. For the induction of CMI (Fig. 4A, C), type 1 help is needed (production of IL-2 and IL-12, interferon-g, and tumor necrosis factor). Th-cells are CD4 positive, regardless whether they have Th1or Th2 functions. There is increasing evidence that the Th1/Th2 balance is an important immunological parameter since some diseases coincide with Th1 (autoimmunity) or Th2 (allergy) type responses.