Emerging insights in molecular pathogenesis of many infectious diseases make it possible to attenuate microorganisms very efficiently nowadays. By mak-ing multiple deletions the risk of reversion to a virulent state during production or after administra-tion can be virtually eliminated. A prerequisite for attenuation by genetic engineering is that the factors responsible for virulence and the life cycle of the pathogen are known in detail. It is also obvious that the protective antigens must be known: attenuation must not result in reduced immunogenicity.

An example of an improved live vaccine obtained by homologous genetic engineering is an experimental, oral cholera vaccine. An effective cholera vaccine should induce a local, humoral response in order to prevent colonization of the small intestine. Initial trials with Vibrio cholerae cholera toxin (CT) mutants caused mild diarrhea, which was thought to be caused by the expression of accessory toxins. A natural mutant was isolated that was negative for these toxins. Next, CT was detoxified by rDNA technology. The resulting vaccine strain, called CVD 103, is well tolerated by volunteers (Suharyono et al., 1992; Tacket et al., 1999) and challenge experiments with adult volunteers showed protection (Garcia et al., 2005).

Genetically attenuated live vaccines have the general drawbacks mentioned in the section “Live Attenuated Vaccines.” For these reasons, it is not surprising that homologous engineering is mainly restricted to pathogens that are used as starting materials for the production of subunit vaccines (see section “Genetically Improved Subunit Vaccines,” below).

A way to improve the safety or efficacy of vaccines is to use live, avirulent or attenuated organisms as acarrier to express protective antigens from a pathogen. Both bacteria and viruses can be used for this purpose; some of them are listed in Table 5. Live vectored vaccines are created by recombinant tech-nology, wherein one or more genes of the vector organism are replaced by one or more protective genes from the pathogen. Administration of such live vectored vaccines results in efficient and prolonged expression of the antigenic genes either by the vaccinated individual’s own cells or by the vector organism itself (e.g., in case of bacteria as carriers). 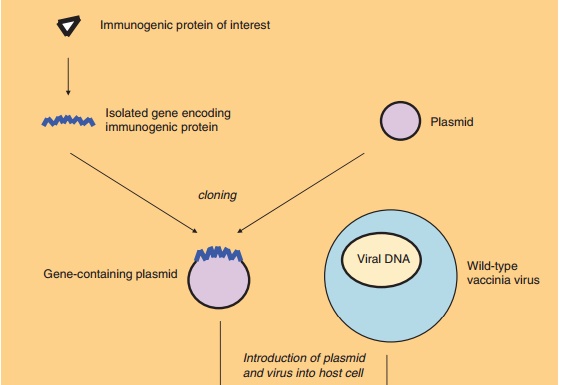 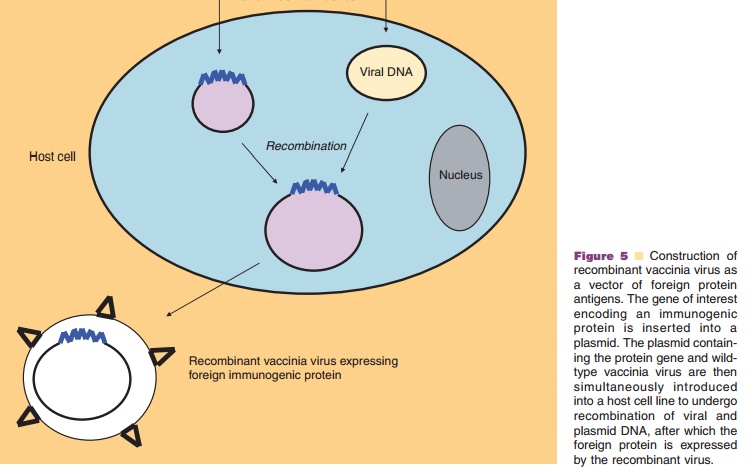 Most experience has been acquired with vaccinia virus by using the principle that is schematically shown in Figure 5. Advantages of vaccinia virus as vector include (i) its proven safety in humans as a smallpox vaccine, (ii) the possibility for multiple immunogen expression, (iii) the ease of production, (iv) its relative heat-resistance, and (v) its various possible administration routes. A multi-tude of live recombinant vaccinia vaccines with viral and tumor antigens have been constructed (Sutter and Staib, 2003), several of which have been tested in the clinic. It has been demonstrated that the products of genes coding for viral envelope proteins can be correctly processed and inserted into the plasma membrane of infected cells. Problems related with the side effects or immunogenicity of vaccinia virus may be circumvented by the use of attenuated strains or poxviruses with a non-human natural host. 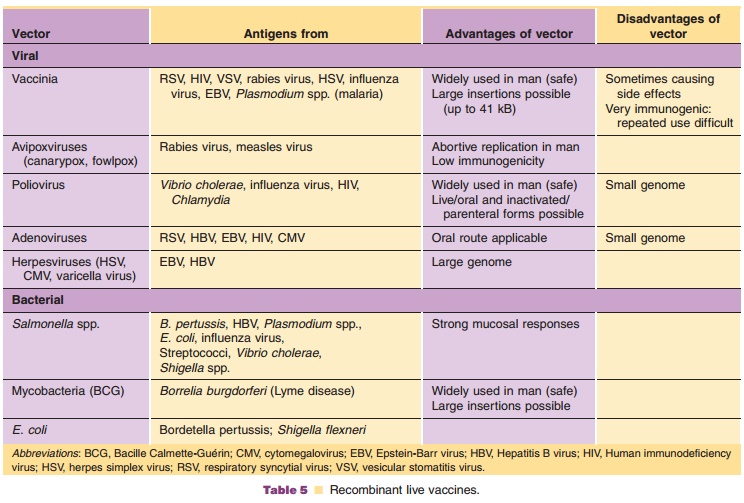 Adenoviruses can also be used as vaccine vectors. Adenoviruses have several characteristics that make them suitable as vaccine vectors: (i) They can infect a broad range of both dividing and non-dividing mammalian cells; (ii) transgene expression is generally high and can be further increased by using heterologous promoter sequences; (iii) adenovirus vectors are mostly replica-tion deficient and do not integrate their genomes into the chromosomes of host cells, making these vectors very safe to use; (iv) upon parenteral administration, adenovirus vectors induce strong immunity and evoke both humoral and cellular responses against the expressed antigen. A number of clinical trials with human adenovirus vectors (HAd5) expressing anti-gens of Ebola virus, human immunodeficiency virus (HIV) and severe acute respiratory syndrome as vaccines against these diseases are currently in progress (Bangari and Mittal, 2006).