Conventional vaccines originate from viruses or bacteria and can be divided in live attenuated vaccines and non-living vaccines.

Conventional vaccines originate from viruses or bacteria and can be divided in live attenuated vaccines and non-living vaccines. In addition, three vaccine generations can be distinguished for non-living vaccines. First generation vaccines consist of aninactivated suspension of the pathogenic microorgan-ism. Little or no purification is applied. For second generation vaccines purification steps are applied, varying from the purification of a pathogenic micro-organism (e.g., improved non-living polio vaccine) to the complete purification of the protective component (e.g., polysaccharide vaccines). Third generation vac-cine are either a well-defined combination of protective components (e.g., acellular pertussis vaccine) or the protective component with the desired immunological properties (e.g., polysaccharides conjugated with carrier proteins). An overview of the various groups of conventional vaccines and their generations is given in Table 4. 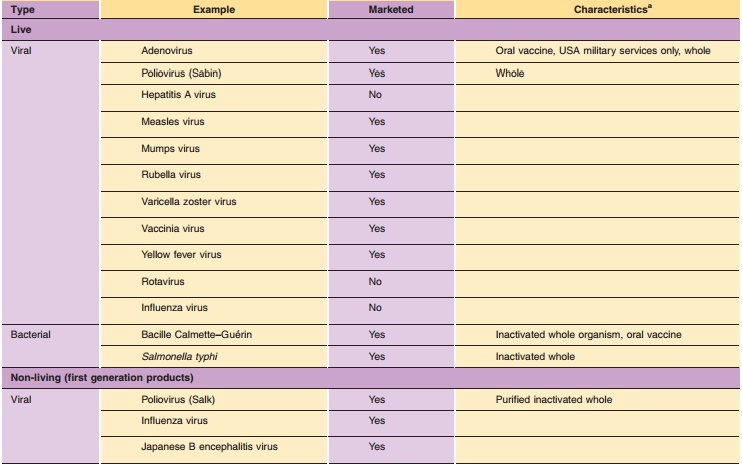 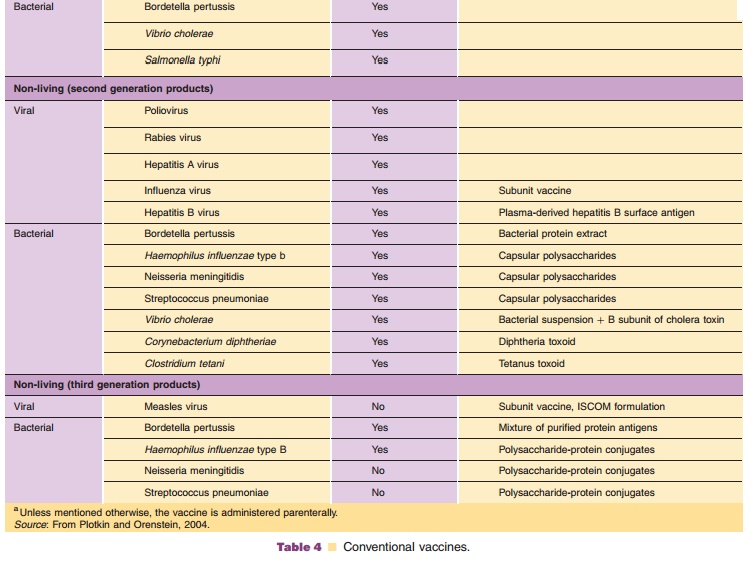 Before the introduction of recombinant-DNA (rDNA) technology, a first step to improved live vaccines was the attenuation of virulent microorganisms by serial passage and selection of mutant strains with reduced virulence or toxicity. Examples are vaccine strains for oral polio vaccine, measles-rubella-mumps (MMR) combination vaccine, and tuberculosis vaccine con-sisting of bacille Calmette-Gue´rin (BCG). An alter-native approach is chemical mutagenesis. For instance, by treating Salmonella typhi with nitrosogua-nidine, a mutant strain lacking some enzymes that are responsible for the virulence was isolated (Germanier and Fuer, 1975).

Live attenuated organisms have a number of advantages as vaccines over non-living vaccines. After administration, live vaccines may replicate in the host similar to their pathogenic counterparts. This confronts the host with a larger and more sustained dose of antigen, which means that few and low doses are required. In general, the vaccines give long-lasting humoral and cell-mediated immunity.

Live vaccines also have drawbacks. Live viral vaccines bear the risk that the nucleic acid is incorporated into the host’s genome. Moreover, reversion to a virulent form may occur, although this is unlikely when the attenuated seed strain contains several mutations. Nevertheless, for diseases such as viral hepatitis, AIDS and cancer, this drawback makes the use of conventional live vaccines virtually unthinkable. Furthermore, it is important to recognize that immunization of immunodeficient children with live organisms can lead to serious complications. For instance, a child with T-cell deficiency may become overwhelmed with BCG and die.

An early approach for preparing vaccines is the inactivation of whole bacteria or viruses. A number of reagents (e.g., formaldehyde, glutaraldehyde) and heat are commonly used for inactivation. Examples of this first generation approach are pertussis, cholera, typhoid fever, and inactivated polio vaccines. These non-living vaccines have the disadvantage that little or no CMI is induced. Moreover, they more frequently cause adverse effects as compared to live attenuated vaccines and second and third generation non-living vaccines.

Some bacteria such as Corynebacterium diphtheriae and

Clostridium tetani form toxins. Antibody-mediated immunity to the toxins is the main protection mechanism against infections with these bacteria. Both toxins are proteins. Around the beginning of the twentieth century, a combination of diphtheria toxin and antibodies to diphtheria toxin was used as diphtheria vaccine. This vaccine was far from ideal and was replaced in the 1920s with formaldehyde-treated toxin. The chemically treated toxin is devoid of toxic properties and is called toxoid. The immuno-genicity of this preparation was relatively low and was improved after adsorption of the toxoid to a suspension of aluminum salts. This combination of an antigen and an adjuvant is still used in existing combination vaccines. Similarly, tetanus toxoid vac-cines have been developed.

Diphtheria toxin has also been detoxified by chemical mutagenesis of Corynebacterium diphtheriae with nitrosoguanidine. These diphtheria toxoids are referred to as cross-reactive materials (e.g., CRM197).

The relatively frequent occurrence of side effects of whole-cell pertussis vaccine was the main reason to develop subunit vaccines in the 1970s, which are referred to as acellular pertussis vaccines. These vaccines were prepared by either extraction of the bacterial suspension followed by purification steps, or purification of the cell-free culture supernatant. These second generation vaccines showed relatively large lot-to-lot variations, as a result of their poorly controlled production processes.

The development of third generation acellular pertussis vaccines in the 1980s exemplifies how a better insight into factors that are important for pathogenesis and immunogenicity can lead to an improved vaccine. It was conceived that a subunit vaccine consisting of a limited number of purified immunogenic components and devoid of (toxic) lipopolysaccharide would significantly reduce unde-sired effects. Four protein antigens important for protection have been identified. However, as yet there exists no consensus about the optimal composition ofan acellular pertussis vaccine. Current vaccines con-tain different amounts of two to four of these proteins.

Bacterial capsular polysaccharides consist of patho-gen-specific multiple repeating carbohydrate epi-topes, which are isolated from cultures of the pathogenic species. Plain capsular polysaccharides (second generation vaccines) are thymus-independent antigens that are poorly immunogenic in infants and show poor immunological memory when applied in older children and adults. The immunogenicity of polysaccharides is highly increased when they are chemically coupled to carrier proteins containing Th-epitopes. This coupling makes them T-cell dependent, which is due to the participation of Th-cells that are activated during the response to the carrier. Examples of such third generation polysaccharide conjugate vaccines include meningococcal type C, pneumococ-cal and Haemophilus influenzae type b (Hib) polysac-charide vaccines that have recently been introduced in many national immunization programs. Four differ-ent conjugated Hib polysaccharide structures are presently available, i.e., chemically linked to either tetanus toxoid, diphtheria toxoid, CRM197 (mutagenically detoxified diphtheria toxin, see above) or meningococcal outer membrane complexes. Apart from the carrier, the four structures vary in the size of the polysaccharide moiety, the nature of the spacer group, the polysaccharide-to-protein ratio, and the molecular size and aggregation state of the conjugates. As a result, they induce different immunological responses. This illustrates that not only the antigen, but also its presentation form determines the im-munogenicity of a vaccine. Therefore, the determina-tion of optimal conjugation procedures, the standardization of conjugation, as well as the separa-tion of conjugates from free proteins and polysacchar-ides are of utmost importance.