A low-frequency or dc gain of approximately 104 is desired for a general purpose op-amp and hence, the use of active load is preferred in the internal circuitry of op-amp.

The output voltage is required to be at ground, when the differential input voltages are zero, and this necessitates the use of dual polarity supply voltage. Since the output resistance of op-amp is required to be low, a complementary push-pull emitter – follower or source follower output stage is employed. Moreover, as the input bias currents are to be very small of the order of pico amperes, an FET input stage is normally preferred.

The input differential amplifier stage uses p-channel JFETs M1 and M2. It employs a three-transistor active load formed by Q3, Q4, and Q5. The bias current for the stage is provided by a two-transistor current source using PNP transistors Q6 and Q7. Resistor R1 increases the o utput resistance seen looking into the collector of Q4 as indicated by R04. This is necessary to provide bias current stability against the transistor parameter variations. Resistor R2 establishes a definite bias current through Q5. A single ended output is taken out at the collector of Q4.

MOSFET‘s are used in place of JFETs with additional devices in the circuit to prevent any damage for the gate oxide due to electrostatic discharges.

The second stage or the gain stage uses Darlington transistor pair formed by Q8 and Q9 as shown in figure. The transistor Q8 is connected as an emitter follower, providing large input resistance.

Therefore, it minimizes the loading effect on the input differential amplifier stage. The transistor Q9 provides an additional gain and Q10 acts as an active load for this stage. The current mirror formed by Q7 and Q10 establishes the bias current for Q9. The VBE drop across Q9 and drop across R5 constitute the voltage drop across R4, and this voltage sets the current through Q8. It can be set to a small value, such that the base current of Q8 also is very less. 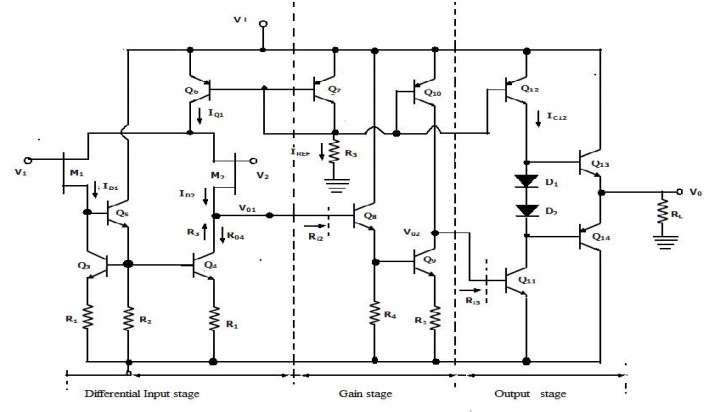 The final stage of the op-amp is a class AB complementary push-pull output stage. Q11 is an emitter follower, providing a large input resistance for minimizing the loading effects on the gain stage. Bias current for Q11 is provided by the current mirror formed by Q7 and Q12, through Q13 and Q14 for minimizing the cross over distortion. Transistors can also be used in place of the two diodes.

The IC 741 produced since 1966 by several manufactures is a widely used general purpose operational amplifier. Figure shows that equivalent circuit of the 741 op-amp, divided into various individual stages. The op-amp circuit consists of three stages.

A bias circuit is used to establish the bias current for whole of the circuit in the IC. The op-amp is supplied with positive and negative supply voltages of value ± 15V and the supply voltages as low as ±5V can also be used.

The input differential amplifier stage consists of transistors Q1 through Q7 with biasing provided by Q8 through Q12. The transistor Q1 and Q2 form emitter – followers contributing to high differential input resistance, and whose output currents are inputs to the common base amplifier using Q3 and Q4 which offers a large voltage gain. The transistors Q5, Q6 and Q7 along with resistors R1, R2 and R3 from the active load for input stage. The single-ended output is available at the collector of Q6. The two null terminals in the input stage facilitate the null adjustment. The lateral PNP transistors Q3 and Q4 provide additional protection against voltage breakdown conditions. The emitter-base junction Q3 and Q4 have higher emitter-base breakdown voltages of about 50V. Therefore, placing PNP transistors in series with NPN transistors provide protection against accidental shorting of supply to the input terminals.

The Second or the gain stage consists of transistors Q16 and Q17, with Q16 acting as an emitter – follower for achieving high input resistance. The transistor Q17 operates in common emitter configuration with its collector voltage applied as input to the output stage. Level shifting is done for this signal at this stage.

Internal compensation through Miller compensation technique is achieved using the feedback capacitor C1 connected between the output and input terminals of the gain stage.

The output stage is a class AB circuit consisting of complementary emitter follower transistor pair Q14 and Q20. Hence, they provide an effective loss output resistance and current gain. The output of the gain stage is connected at the base of Q22, which is connected as an emitter follower providing a very high input resistance, and it offers no appreciable loading effect on the gain stage. It is biased by transistor Q13A which also drives Q18 and Q19, that are used for establishing a quiescent bias current in the output transistors Q14 and Q20.