A constant current source makes use of the fact that for a transistor in the active mode of operation, the collector current is relatively independent of the collector voltage.

A constant current source makes use of the fact that for a transistor in the active mode of operation, the collector current is relatively independent of the collector voltage. In the basic circuit shown in fig 1 and collector characteristics of a CE Transistor as in fig.2 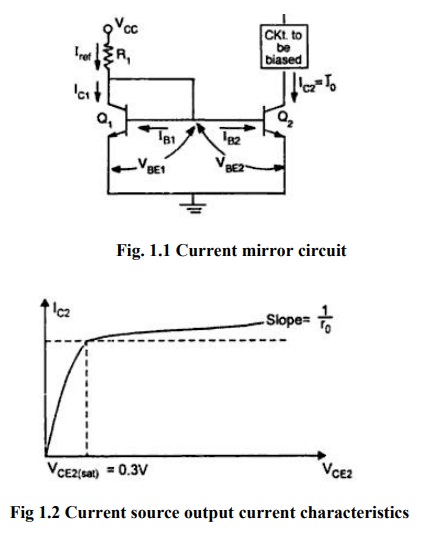 Transistors Q1&Q2 are matched as the circuit is fabricated using IC technology. Base and emitter of Q1& Q2 are tied together and thus have the same VBE. In addition, transistor Q1 is connected as a diode by shorting its collector to base. The input current Iref flows through the diode connected transistor Q1 and thus establishes a voltage across Q1. This voltage in turn appears between the base and emitter of Q2 .Since Q2 is identical to Q1, the emitter current of Q2 will be equal to emitter current of Q1 which is approximately equal to Iref. As long as Q2 is maintained in the active region ,its collector current IC2=Io will be approximately equal to Iref . Since the output current Io is a reflection or mirror of the reference current Iref, the circuit is often referred to as a current mirror.

Where IES is reverse saturation current in emitter junction and VT is temperature equivalent of voltage.

Also since both the transistors are identical, IC1= IC2

KCL at the collector of Q1 gives

The circuit however operates as a constant current source as long as Q2 remains in the active region. 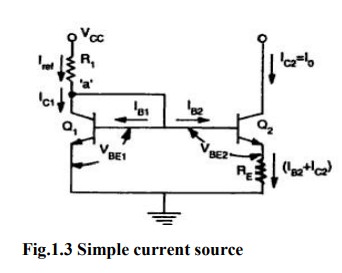 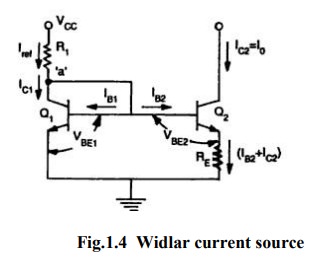 Widlar current source which is particularly suitable for low value of currents. The circuit differs from the basic current mirror only in the resistance RE that is included in the emitter lead of Q2. It can be seen that due to RE the base-emitter voltage VBE2 is less than VBE1 and consequently current Io is smaller than IC1 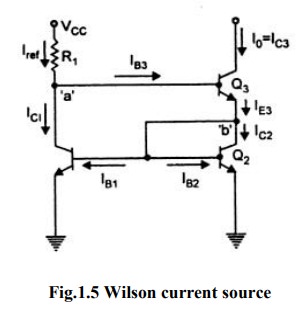 It provides an output current I0 which is very nearly equal to Vref and also exhibits a very high output resistance.

But output resistance is greater than Widlar source.