For small signal sinusoidal (AC) application one has to know the ac characteristics such as frequency response and slew-rate.

For small signal sinusoidal (AC) application one has to know the ac characteristics such as frequency response and slew-rate.

The variation in operating frequency will cause variations in gain magnitude and its phase angle. The manner in which the gain of the op-amp responds to different frequencies is called the frequency response. Op-amp should have an infinite bandwidth BW =∞ (i.e.) if its open loop gain in 90dB with dc signal its gain should remain the same 90 dB through audio and onto high radio frequency. The op-amp gain decreases (roll-off) at higher frequency what reasons to decrease gain after a certain frequency reached. There must be a capacitive component in the equivalent circuit of the op-amp. For an op-amp with only one break (corner) frequency all the capacitors effects can be represented by a single capacitor C. Below fig is a modified variation of the low frequency model with capacitor C at the output.

There is one pole due to R0C and one -20dB/decade. The open loop voltage gain of an op-amp with only one corner frequency is obtained from above fig.

(lagging and an infinite frequency the phase angle is -90 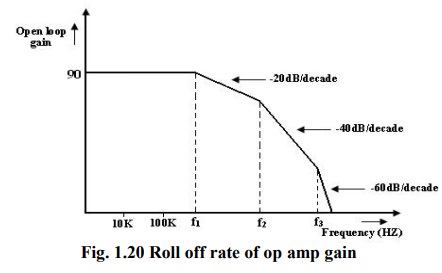 A circuit or a group of circuit connected together as a system is said to be stable, if its o/p reaches a fixed value in a finite time. A system is said to be unstable, if its o/p increases with time instead of achieving a fixed value. In fact the o/p of an unstable sys keeps on increasing until the system break down. The unstable system is impractical and need be made stable. The criterion gn for stability is used when the system is to be tested practically. In theoretically, always used to test system for stability, ex: Bode plots.

Bode plots are compared of magnitude Vs Frequency and phase angle Vs frequency. Any system whose stability is to be determined can represented by the block diagram. 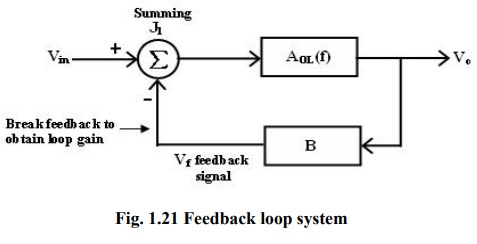 The closed loop gain Af is given by AF = V0/Vin

B = gain of feedback circuit.

B is a constant if the feedback circuit uses only resistive components.

, the system is stable. However, the some systems the magnitude may never be 0, in that cases method 2, must be used.

, If the magnitude is –ve decibels then the system is stable. However, the some systems the phase angle of a system may reach -1800, under such conditions method 1 must be used to determine the system stability.

voltage due to mismatch in transistor.

The op-amp‘s input is differential amplifier, which may be made of BJT or FET.

In an ideal op-amp, we assumed that no current is drawn from the input terminals the base currents entering into the inverting and non-inverting terminals (IB- & IB+ respectively).

Even though both the transistors are identical, IB- and IB+ are not exactly equal due to internal imbalance between the two inputs. Manufacturers specify the input bias current IB 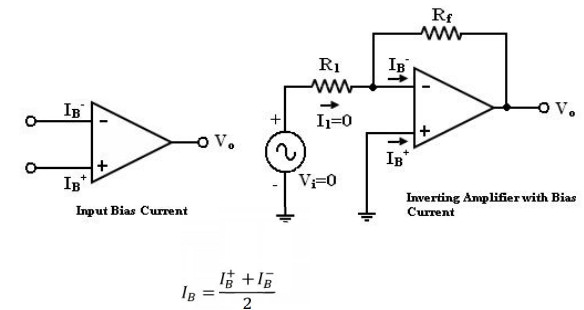 If input voltage Vi = 0V. The output Voltage Vo should also be (Vo = 0) but for IB = 500nA We find that the output voltage is offset by Op-amp with a 1M feedback resistor

The output is driven to 500mV with zero input, because of the bias currents.

In application where the signal levels are measured in mV, this is totally unacceptable. This can be compensated by a compensation resistor Rcomp has been added between the non-inverting input terminal and ground as shown in the figure below. 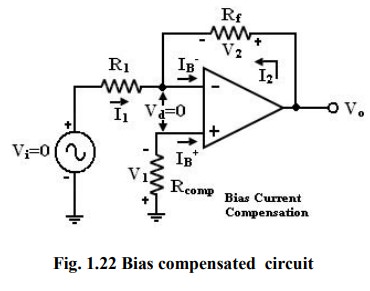 Current IB+ flowing through the compensating resistor Rcomp, then by KVL we get,

i.e. to compensate for bias current, the compensating resistor, Rcomp should be equal to the parallel combination of resistor R1 and Rf.

ü        Bias current compensation will work if both bias currents IB+ and IB- are equal.

ü        Since the input transistor cannot be made identical. There will always be some small

difference between IB+ and IB-. This difference is called the offset current

Equation (16) the offset current can be minimized by keeping feedback resistance small.

The T-feedback network is a good solution. This will allow large feedback resistance, while keeping the resistance to ground low (in dotted line).

·           The T-network provides a feedback signal as if the network were a single feedback resistor.

By T to Π conversion,

In spite of the use of the above compensating techniques, it is found that the output voltage may still not be zero with zero input voltage [Vo ≠ 0 with Vi= 0]. This is due to unavoidable imbalances inside the op-amp and one may have to apply a small voltage at the input terminal to make output (Vo) = 0.

This voltage is called input offset voltage Vos. This is the voltage required to be applied at the input for making output voltage to zero (Vo = 0). 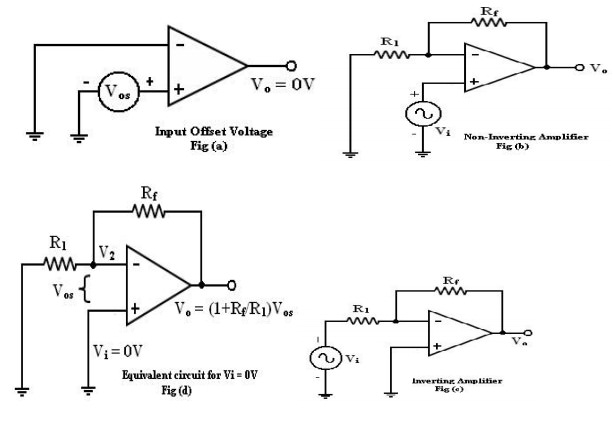 Let us determine the Vos on the output of inverting and non-inverting amplifier. If Vi = 0 (Fig (b) and (c)) become the same as in figure (d). 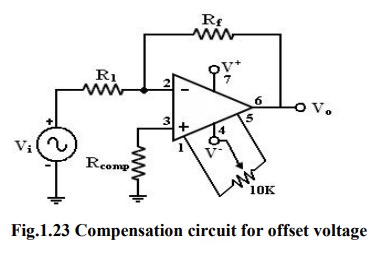 When the given (below) op-amps does not have these offset null pins, external balancing techniques are used.

With Rcomp, the total output offset 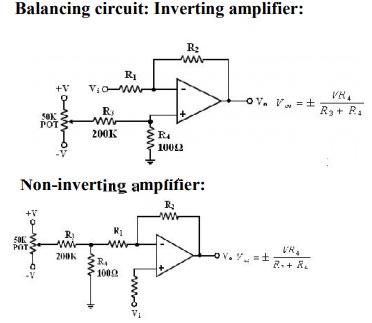 Bias current, offset current, and offset voltage change with temperature. A circuit carefully nulled at 25ºC may not remain. So when the temperature rises to 35ºC. This is called drift. Offset current drift is expressed in nA/ºC. These indicate the change in offset for each degree Celsius change in temperature.