Function of the Heart: Conduction System 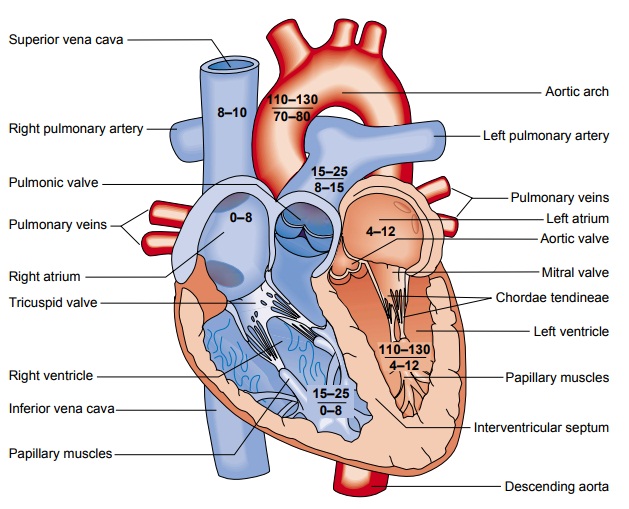 The specialized heart cells of the cardiac conduction system me-thodically generate and coordinate the transmission of electrical impulses to the myocardial cells.

FUNCTION OF THE HEART: CONDUCTION SYSTEM

The specialized heart cells of the cardiac conduction system me-thodically generate and coordinate the transmission of electrical impulses to the myocardial cells. The result is sequential atrio-ventricular contraction, which provides for the most effective flow of blood, thereby optimizing cardiac output. Three physio-logic characteristics of the cardiac conduction cells account for this coordination:

Excitability: ability to respond to an electrical impulse

Conductivity: ability to transmit an electrical impulse from onecell to another

The sinoatrial (SA) node, referred to as the primary pace-maker of the heart, is located at the junction of the superior vena cava and the right atrium (Fig. 26-3). The SA node in a normal resting heart has an inherent firing rate of 60 to 100 impulses per minute, but the rate can change in response to the metabolic de-mands of the body. 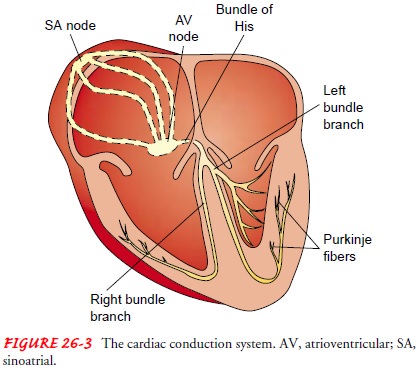 The electrical impulses initiated by the SA node are conducted along the myocardial cells of the atria via specialized tracts called internodal pathways. The impulses cause electrical stimulation and subsequent contraction of the atria.

The impulses are then conducted to the atrioventricular (AV) node. The AV node (lo-cated in the right atrial wall near the tricuspid valve) consists of another group of specialized muscle cells similar to those of the SA node. The AV node coordinates the incoming electrical im-pulses from the atria and, after a slight delay (allowing the atria time to contract and complete ventricular filling), relays the impulse to the ventricles. This impulse is then conducted through a bun-dle of specialized conduction cells (bundle of His) that travel in the septum separating the left and right ventricles. The bundle of His divides into the right bundle branch (conducting impulses to the right ventricle) and the left bundle branch (conducting im-pulses to the left ventricle). To transmit impulses to the largest chamber of the heart, the left bundle branch bifurcates into the left anterior and left posterior bundle branches. Impulses travel through the bundle branches to reach the terminal point in the conduction system, called the Purkinje fibers. This is the point at which the myocardial cells are stimulated, causing ventricular contraction.

Cardiac electrical activity is the result of the movement of ions (charged particles such as sodium, potassium, and calcium) across the cell membrane. The electrical changes recorded within a single cell result in what is known as the cardiac action potential (Fig. 26-4). 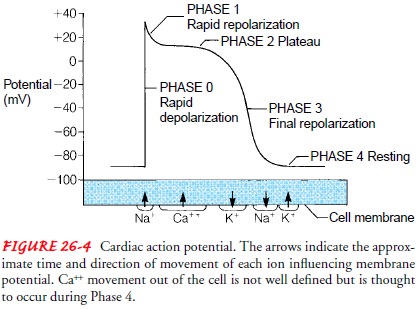 In the resting state, cardiac muscle cells are polarized, which means an electrical difference exists between the negatively charged inside and the positively charged outside of the cell membrane.

As soon as an electrical impulse is initiated, cell membrane per-meability changes and sodium moves rapidly into the cell, while potassium exits the cell. This ionic exchange begins depolariza-tion (electrical activation of the cell), converting the internalcharge of the cell to a positive one (see Fig. 26-4). Contraction of the myocardium follows depolarization. The interaction between changes in membrane voltage and muscle contraction is called electromechanical coupling. As one cardiac muscle cell is depo-larized, it acts as a stimulus to its neighboring cell, causing it to depolarize. Sufficient depolarization of a single specialized con-duction system cell results in depolarization and contraction of the entire myocardium. Repolarization (return of the cell to its resting state) occurs as the cell returns to its baseline or resting state; this corresponds to relaxation of myocardial muscle.

After the rapid influx of sodium into the cell during depolariza-tion, the permeability of the cell membrane to calcium is changed. Calcium enters the cell and is released from intracellular calcium stores. The increase in calcium, which occurs during the plateau phase of repolarization, is much slower than that of sodium and continues for a longer period.

An important determinant of blood flow in the cardiovascular sys-tem is the principle that fluid flows from a region of higher pres-sure to one of lower pressure. The pressures responsible for blood flow in the normal circulation are generated during systole and di-astole. Figure 26-5 depicts the pressure differences in the great ves-sels and in the four chambers of the heart during systole and diastole. 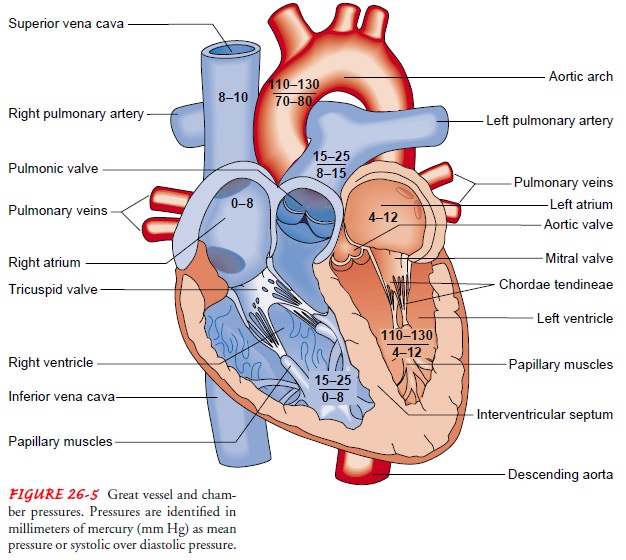 Beginning with systole, the pressure inside the ventricles rapidly rises, forcing the atrioventricular valves to close. As a result, blood ceases to flow from the atria into the ventricles and regurgitation (backflow) of blood into the atria is prevented. The rapid rise of pressure inside the right and left ventricles forces the pulmonic and aortic valves to open, and blood is ejected into the pulmonary artery and aorta, respectively. The exit of blood is at first rapid; then, as the pressure in each ventricle and its corresponding artery equalizes, the flow of blood gradually decreases. At the end of systole, pressure within the right and left ventricles rapidly de-creases. This lowers pulmonary artery and aortic pressure, causing closure of the semilunar valves. These events mark the onset of diastole.

During diastole, when the ventricles are relaxed and the atrio-ventricular valves are open, blood returning from the veins flows into the atria and then into the ventricles. Toward the end of this diastolic period, the atrial muscles contract in response to an electrical impulse initiated by the SA node (atrial systole). The resultant contraction raises the pressure inside the atria, ejecting blood into the ventricles. Atrial systole augments ventricular blood volume by 15% to 25% and is sometimes referred to as the “atrial kick.” At this point, ventricular systole begins in response to propagation of the electrical impulse that began in the SA node some milliseconds previously. The following section reviews the chamber pressures generated during systole and diastole.

In the right side of the heart, the pressuregenerated during ventricular systole (15 to 25 mm Hg) exceeds the pulmonary artery diastolic pressure (8 to 15 mm Hg), and blood is ejected into the pulmonary circulation. During diastole, venous blood flows into the atrium because pressure in the supe-rior and inferior vena cava (8 to 10 mm Hg) is higher than that in the atrium. Blood flows through the open tricuspid valve and into the right ventricle until the two right chamber pressures equalize (0 to 8 mm Hg).

In the left side of the heart, similar events occur, although higher pressures are generated. As pressure mounts in the left ven-tricle during systole (110 to 130 mm Hg), resting aortic pressure (80 mm Hg) is exceeded and blood is ejected into the aorta. Dur-ing left ventricular ejection, the resultant aortic pressure (110 to 130 mm Hg) forces blood progressively through the arteries. For-ward blood flow into the aorta ceases as the ventricle relaxes and pressure drops. During diastole, oxygenated blood returning from the pulmonary circulation via the four pulmonary veins flows into the atrium, where pressure remains low. Blood readily flows into the left ventricle because ventricular pressure is also low. At the end of diastole, pressure in the atrium and ventricle equilibrates (4 to 12 mm Hg). Figure 26-5 depicts the systolic and diastolic pressures in the four chambers of the heart.

Pressure Measurement. Chamber pressures are measured withthe use of special monitoring catheters and equipment. This technique is called hemodynamic monitoring. Nurses caring for critically ill patients must have a sophisticated working knowl-edge of normal chamber pressures and the hemodynamic changes that occur during serious illnesses. The data obtained from hemo-dynamic monitoring assist with the diagnosis and management of pathophysiologic conditions affecting critically ill patients.

Cardiac output must be responsive to changes in the metabolic demands of the tissues. For example, during exercise the total car-diac output may increase fourfold, to 20 L per minute. This in-crease is normally accomplished by approximate doubling of both the heart rate and the stroke volume. Changes in heart rate are ac-complished by reflex controls mediated by the autonomic ner-vous system, including its sympathetic and parasympathetic divisions. The parasympathetic impulses, which travel to the heart through the vagus nerve, can slow the cardiac rate, whereas sym-pathetic impulses increase it. These effects on heart rate result from action on the SA node, to either decrease or increase its in-herent rate. The balance between these two reflex control systems normally determines the heart rate. The heart rate is stimulated also by an increased level of circulating catecholamines (secreted by the adrenal gland) and by excess thyroid hormone, which pro-duces a catecholamine-like effect.

Heart rate is also affected by central nervous system and baro-receptor activity. Baroreceptors are specialized nerve cells located in the aortic arch and in both right and left internal carotid arteries (at the point of bifurcation from the common carotid ar-teries). The baroreceptors are sensitive to changes in blood pres-sure (BP). During elevations in BP (hypertension), these cells increase their rate of discharge, transmitting impulses to the medulla. This initiates parasympathetic activity and inhibits sym-pathetic response, lowering the heart rate and the BP. The oppo-site is true during hypotension (low BP). Hypotension results in less baroreceptor stimulation, which prompts a decrease in parasympathetic inhibitory activity in the SA node, allowing for enhanced sympathetic activity. The resultant vasoconstriction and increased heart rate elevate the BP.

Preload is the term used to describe the degree of stretch ofthe cardiac muscle fibers at the end of diastole. The end of dias-tole is the period when filling volume in the ventricles is the high-est and the degree of stretch on the muscle fibers is the greatest. The volume of blood within the ventricle at the end of diastole determines preload. Preload has a direct effect on stroke volume. As the volume of blood returning to the heart increases, muscle fiber stretch also increases (increased preload), resulting in stronger contraction and a greater stroke volume. This relationship, called the Frank-Starling law of the heart (or sometimes the Starling law of the heart), is maintained until the physiologic limit of the mus-cle is reached.

The Frank-Starling law is based on the fact that, within lim-its, the greater the initial length or stretch of the cardiac muscle cells (sarcomeres), the greater the degree of shortening that oc-curs. This result is caused by increased interaction between the thick and thin filaments within the cardiac muscle cells. Preload is decreased by a reduction in the volume of blood returning to the ventricles. Diuresis, venodilating agents (eg, nitrates), and loss of blood or body fluids from excessive diaphoresis, vomiting, or diarrhea reduce preload. Preload is increased by increasing the return of circulating blood volume to the ventricles. Controlling the loss of blood or body fluids and replacing fluids (ie, blood transfusions and intravenous fluid administration) are examples of ways to increase preload.

Changes in cardiac structure and function are clearly observable in the older heart. To understand the changes specifically related to aging, it is helpful to distinguish the normal aging process from changes related to CVD. The anatomic and functional changes in the aging heart are listed in Table 26-1. 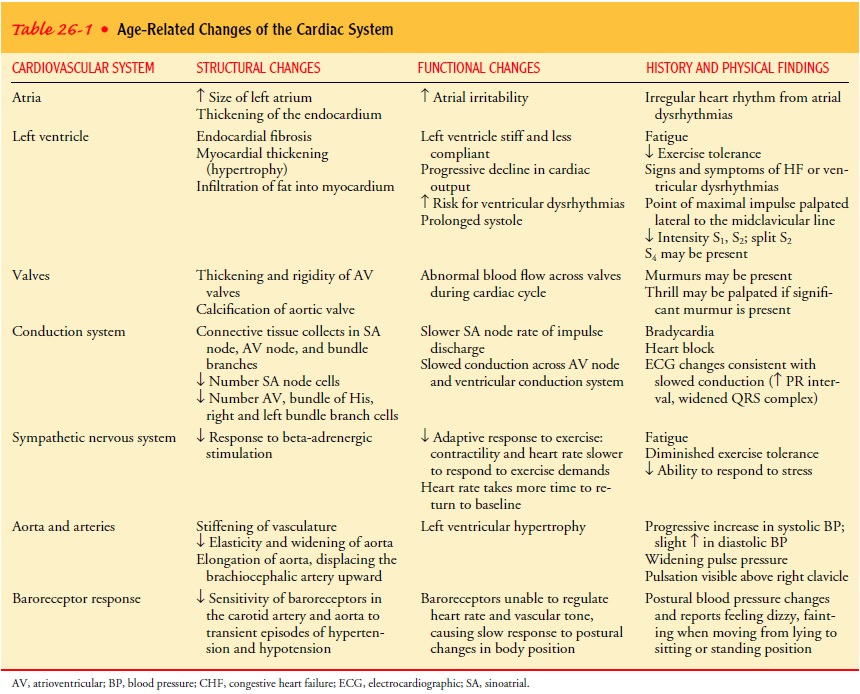 Studies show that the normal aging heart can produce ade-quate cardiac output under ordinary circumstances but may have a limited ability to respond to situations that cause physical or emotional stress. In an elderly person who is less active, the left ventricle may become smaller (atrophy) as a consequence of phys-ical deconditioning. Aging also results in decreased elasticity and widening of the aorta, thickening and rigidity of the cardiac valves, and increased connective tissue in the SA and AV nodes and bundle branches.

These changes lead to decreased myocardial contractility, in-creased left ventricular ejection time (prolonged systole), and de-layed conduction. Therefore, stressful physical and emotional conditions, especially those that occur suddenly, may have ad-verse effects on the aged person. The heart cannot respond to such conditions with an adequate rate increase and needs more time to return to a normal resting rate after even a minimal in-crease in heart rate. In some patients, the added stress may pre-cipitate heart failure (HF).