The clinical tests used in hospital laboratories undergo thorough evaluation prior to usage in a laboratory. A number of factors are assessed including accuracy, precision, reliability, practicality, safety, ease of use, duration and cost.

The clinical tests used in hospital laboratories undergo thorough evaluation prior to usage in a laboratory. A number of factors are assessed including accuracy, precision, reliability, practicality, safety, ease of use, duration and cost.

Accuracy refers to the ability of a method to give results that are close to thetrue value of the substance (analyte) being measured. The results obtained from laboratory tests may be based on subjective assessment as, for example, following the microscopic examination of a tissue section obtained after biopsy during the investigation of a possible malignancy. These types of assessments rely heavily on the experience of the practitioner in recognizing and identifying key changes. Many tests, however, provide quantitative data such as blood glucose concentrations in diabetics, or the concentration of thyroid stimulating hormone (TSH) in the serum of a patient with suspected hypothyroidism. The interpretation of many clinical tests for analytes requires referral to its reference range.

The precision of a method refers to its ability to provide the same result every time it is used. Precision is assessed by repeatedly measuring samples taken from a single specimen and from batches of samples. The variation in the results may be assessed by calculating statistical parameters, such as standard deviation (SD) or coefficient of variance (cv).

Often substances in biological materials are present in extremely low concentrations and it may be necessary for the clinical test to detect such low concentrations of analyte and, indeed, monitor changes in its concentration. The analytical sensitivity of a method is its ability to detect small amounts of the analyte under investigation. A related term is the limit of detection, which is the smallest amount of a substance that can be distinguished from the zero value. Biological material contains many components and some of these may interfere with the test being used, giving rise to unreliable results. For this reason, the analytical specificity of a test, that is, the ability of the method to detect only the test substance, may be determined.

In addition to analytical variation, test results are subject to biological variation. The discrimination between normal and abnormal results can be influenced by a number of biological factors. These include the sex and age of the patient, his or her diet, the time of collecting the sample, the posture adopted, whether the patient is stressed or had been exercising, the menstrual state of a female patient and whether she is pregnant, whether the person is taking drugs (legal or illegal). All these influence the results of the test. Thus, for example, plasma iron and urate values are higher in male than female patients; the activity of serum alkaline phosphatase is greater in growing children than in adults. Variations in diet may affect concentration of certain analytes, such as cholesterol (Figure 1.21). The values of some analytes, such as the concentration of cortisol in the plasma, show a diurnal variation. Blood should be collected from a seated patient since differences in posture at the time of blood collection can influence the concentrations of a number of analytes including the concentration of plasma proteins. Stress influences the release of a number of hormones, such as adrenaline and cortisol, while the concentrations of serum analytes, like creatine kinase and lactate, increase following exercise. The concentrations of ovarian hormones are strongly influenced by the menstrual cycle and corticosterone is known to vary by as much as 50% during different stages of the cycle. The nature and concentrations of many hormones change during pregnancy. Lastly, some drugs can influence results. For example, patients on estrogen-containing oral contraceptives often have an increased concentration of total plasma protein.

Analytical methods need to satisfy certain criteria to ensure they are practical and suitable for use in the laboratory. New methods are introduced into the laboratory only if they offer significant advantages over existing methods. New methods are assessed for their speed, that is, how many specimens can be processed in a given time and how long it takes to produce a result. The time a test takes may, of course, be vitally important in the care and treatment of a patient when urgent intervention is necessary.

Hospital laboratories have witnessed an increasing workload in recent years, and although they are helped by automation (Figure 1.10), they process very large numbers of specimens on a daily basis. Like all organizations, they have a finite budget and it is vital that the cost of tests is kept to a minimum. As well as direct costs, such as those for reagents, equipment and labor, there are indirect costs, such as the heating and lighting of laboratories. Safety is also of importance and biological, chemical, mechanical and electrical hazards associated with the method need to be assessed to ensure the safety of hospital laboratory staff. 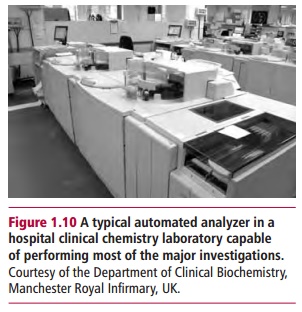