Some diseases share common features and can be grouped together in a classification system.

Some diseases share common features and can be grouped together in a classification system. One way of classifying diseases is on the basis of their cause (Table 1.2). This is by no means perfect as some diseases have multiple causes and there is likely to be an overlap between the different categories. 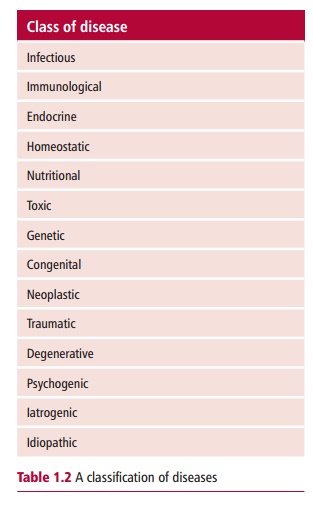 Infectious diseases are caused when microorganisms such as viruses, bacteria,fungi, protozoa and helminths enter and spread within the body.

Immunological diseases  occur in circumstances inwhich the immune system can cause damage to the body’s own tissues. In autoimmune conditions, for example autoimmune thyroiditis, antibodies are produced that attack the body’s own tissues. Alternatively, there are diseases associated with immunodeficiency that increase the susceptibility of the patient to infectious agents. This occurs in severe combined immunodeficiency (SCID) and in AIDS.

Endocrine diseases arise from the over- or underproduction of hormones orfrom resistance to a particular hormone perhaps because the cellular receptor is absent as the result of a mutation. Thus, for example, acromegaly is caused by the overproduction of growth hormone in adults, whereas type 2 diabetes mellitus is a consequence of insulin resistance, when the appropriate target cells fail to respond to the hormone (Figure 1.6). 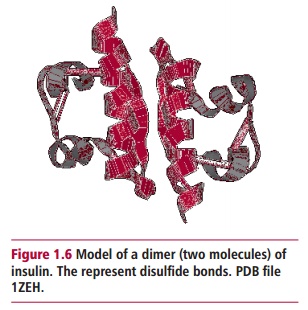 Homeostatic diseases arise when mechanisms for controlling homeostasisare disrupted. For example, in the syndrome of ‘inappropriate ADH secretion’ diminished urine production leads to an increase in body fluids.

Nutritional diseases result from an inadequate intake of nutrients, such asproteins (which supply essential amino acids), carbohydrates, essential fatty acids, vitamins or trace elements. Inadequate nutrition is a major cause of disease, particularly in developing countries. Such deficiencies may be generalized, as in protein-energy malnutrition where there is simply not enough food, or there may be a lack of a specific nutrient, for example, vitamin A (Figure 1.7) leading to several disorders including night blindness. In contrast, in many developed countries an excessive intake of energy combined with a lack of exercise is responsible for a worrying increase in obesity. 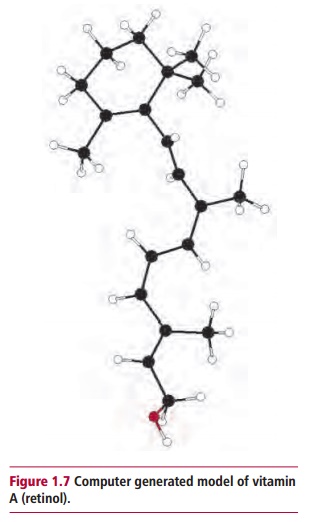 Toxic diseases are caused by the ingestion of a variety of poisonsthat may be encountered in the environment. Ingestion may be accidental or deliberate. Carbon monoxide can be inhaled from car exhausts or faulty gas fires or water heaters, causing tissue hypoxia and death.

Genetic diseases arise due to defects in the genes or chromosomes ofindividuals  A defective gene may result in the inadequate production of a key enzyme, such as phenylalanine hydroxylase in phenylketonuria. Down syndrome is an example of a disorder which arises due to an abnormal chromosome complement. Some genetic disorders are not inherited from parents and may arise from a new genetic mutation in the offspring, as in the disease progeria. Congenital diseases are present at birth and may or may not have been inherited. They may arise due to a developmental defect of known or unknown cause. Thus, a newborn may suffer from fetal alcohol syndrome, a congenital condition arising as a consequence of excessive alcohol intake by the mother during pregnancy.

Neoplastic diseases are characterized by the uncontrolled and abnormalgrowth of cells. These cells form benign or malignant tumors . Malignant neoplasms are a major cause of death in many developed countries. Moreover, their incidence is increasing as people live longer.

Traumatic diseases are caused by physical injury and include mechanicaltrauma, extremes of heat or cold, electrical shock and radiation. Apart from the obvious problems caused by extensive damage to tissues, traumatic diseases may render an individual more prone to infection by compromizing the immune system .

Degenerative diseases involve the progressive loss of body tissues andimpairment of their functions usually associated with aging . Examples include neurodegenerative diseases, such as the relatively common Alzheimer’s disease and muscular dystrophy.

Psychogenic diseases originate in the mind. They may have a significantpsychological or emotional component as seen, for example, in schizophrenia.

Iatrogenic diseases arise as a consequence of treatment. For example,patients who are receiving drugs, such as thiazide diuretics to control their blood pressure, may suffer from low serum K+ (hypokalemia) caused by an excessive renal loss. If untreated, hypokalemia may, in turn, cause cardiac arrhythmias . Finally, idiopathic diseases are those of unknown cause.