Every disease has a number of characteristic features. These features allow diseases to be categorized and allow a better understanding of the disease, its diagnosis and management.

Every disease has a number of characteristic features. These features allow diseases to be categorized and allow a better understanding of the disease, its diagnosis and management. A correct diagnosis should mean that appropriate treatment is given.

Etiology refers to the cause of a disease. Etiological agents can be endogenous, in other words originating from within the body, or exogenous, coming from outside the body. Endogenous agents include genetic defects and endocrine disorders, while exogenous agents include microorganisms such as viruses (Figure 1.2), bacteria (Figure 1.3) and fungi that cause infections, chemicals, physical trauma and radiation. Many diseases are said to be predictable and arise as a direct consequence of exposure to the causative agent. Other diseases are considered probable in that they may be a consequence of the causative agent but the development of illness is not inevitable. An individual can be infected with a pathogenic microorganism but the outcome of the disease may depend on other factors such as the nutritional and immune status of the affected person. 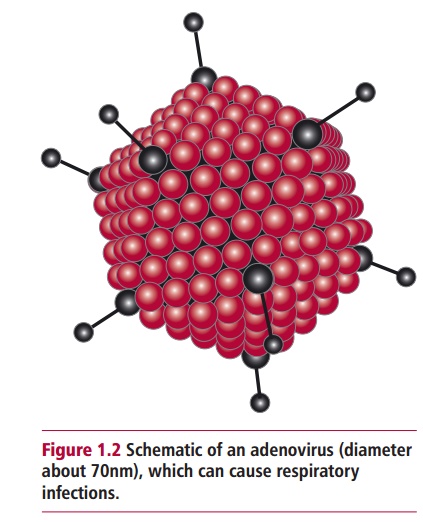 Some diseases have more than one etiological agent and may, indeed, be caused by a range of factors. Such diseases are said to be multifactorial in origin. Diabetes mellitus type 2, a disorder of carbohydrate, fat and protein metabolism, is believed to have a multifactorial origin involving several genetic, dietary and environmental factors. Many diseases are of unknown cause and are said to be idiopathic. An example of this is hypertension, where more than 90% of cases are of unknown cause. The treatment of idiopathic diseases is restricted to alleviating the symptoms. Some conditions are caused by the effects of treatment and are called iatrogenic diseases (from the Greek word iatros, doctor). The treatment of some cancers with cytotoxic drugs, for example, can cause a severe iatrogenic anemia although they may be curing the cancer. 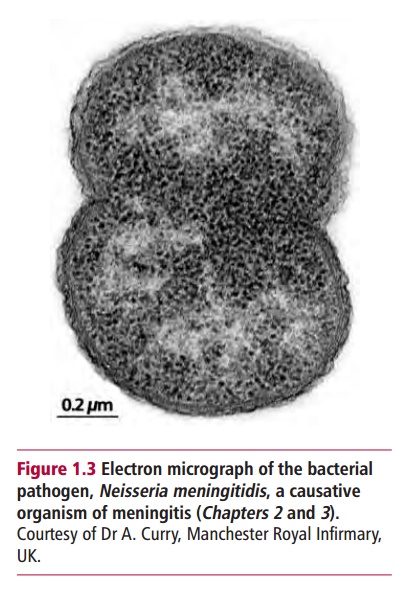 Occasionally a disease of unknown etiology is more commonly found in populations with certain dietary, occupational or lifestyle conditions called risk factors. Smoking is a significant risk factor in the development of heartdisease and lung cancer. Some risk factors may be important in the development of the disease whereas others may make the individual more susceptible to disease. Predisposing factors are conditions or situations that make an individual more susceptible to disease. They include age, sex, heredity and environmental factors. For example, the immune system in a newborn is not fully developed and, as a consequence, babies are more susceptible to infections. However, during aging the immune system undergoes a progressive decline in function making the elderly also more susceptible to infections. Sex may also be a predisposing factor: men are more likely to suffer from gout than women whereas osteoporosis is more common in the latter.

Some diseases increase the risk of developing others. Thus some conditions increase the risk of someone developing cancer and are said to be premalignant. This is seen in ulcerative colitis, an inflammatory condition affecting the large intestine that increases the probability of developing bowel cancer in sufferers. Some diseases predispose the patient to other conditions by allowing infectious agents, not normally pathogenic, to cause disease. This is seen in opportunistic infections where a decline in the immunological functionsof an individual makes them susceptible to infections by microorganisms that are normally nonpathogenic. In acquired immunodeficiency syndrome (AIDS), the individuals infected with the human immunodeficiency virus (HIV), (Figure 1.4) have little resistance to infections by microorganisms, such as those responsible for causing pneumonia, as well as microorganisms such as the yeast Candida, which are part of the normal flora of the body. 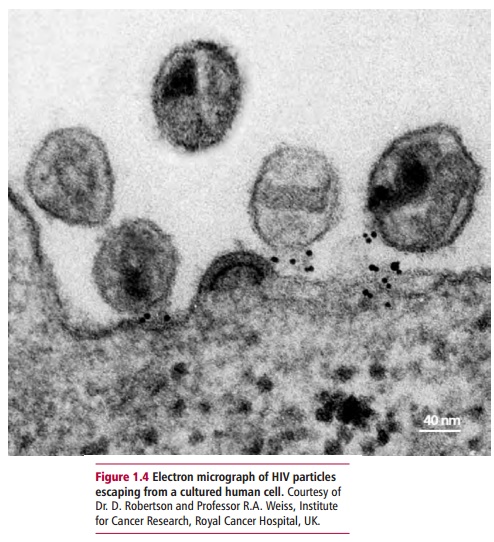 Diseases are often described as being primary or secondary. Primary may refer to a disease of unknown cause or idiopathic, whereas secondary is used to refer to a condition that arises from an existing disease. However, these terms are also often used to describe the stages of a disease. For example, in cancer the primary tumor is the initial tumor whereas secondary tumors arise following metastasis of the primary tumor to other tissues.

Every disease has a pathogenesis that describes the development of the disease or, more specifically, how the etiological agent(s) acts to produce the clinical and pathological changes characteristic of that disease. Some examples of how diseases undergo pathogenesis include inflammatory reactions in response to harmful agents and carcinogenesis where the formation of tumors occurs as a result of exposure to carcinogens (cancer-inducing substances).

Diseases have ‘natural histories’ that describe the typical patterns of how each disease usually progresses, its effects and its duration. The effects of the disease on the patient are referred to as morbidity. Occasionally the morbidity of a disease may cause disability that, in turn, may restrict the activities of the patient. The mortality of a disease describes its possibility of causing death. This is usually expressed as a percentage. Some diseases have a rapid, often severe onset that is described as acute. However, other diseases have a chronic onset and develop gradually over a relatively longer time. Thus acuterenal failure is characterized by rapid deterioration of kidney function over a matter of days, while chronic renal failure develops over months or even years.

Diseases rarely occur immediately following exposure to an etiological agent. In most cases, a period of time, the incubation period, must elapse before the disease becomes apparent. In carcinogenesis, this period may last several decades and is referred to as the latent period. With infectious diseases, the time between exposure and development of the disease is often characteristic of the infectious agent involved.

The etiology of a disease and its pathogenesis produce clinical manifestations that include signs and symptoms of the disease. A symptom is an indication that a disease is present and something of which the patient complains, for example, nausea, malaise or pain (Table 1.1). A sign is something that the clinician specifically looks or feels for, such as redness or swelling of the skin, when examining the patient. Some diseases present with a subclinical stage where these signs and symptoms are not apparent, even though the disease is established and characteristic biochemical and cellular changes that are detectable by laboratory analysis of, for example blood or urine have taken place.

Clinical signs and symptoms are often accompanied by structural or functional abnormalities, called lesions, in affected tissues that are responsible for ill health and usually cause the signs and symptoms of disease. Lesions may be biochemical in nature, such as defective hemoglobin in patients with hemoglobinopathies. Alternatively, a lesion may include deposition of abnormal substances in cells, tissues and organs such as deposition of amyloid in the brain in patients with Alzheimer’s disease. Loss of healthy surface tissue, for example, in gastric ulceration, may also 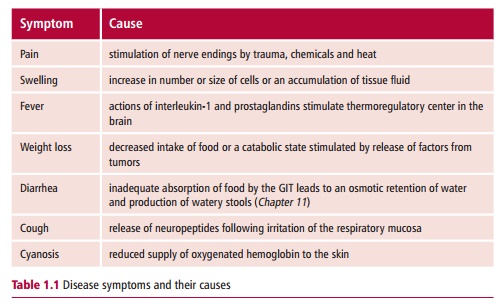 be a feature of some diseases. Diseases may involve functional abnormalities such as an inappropriate secretion of hormones. Examples of these include the excessive production of thyroid hormones in hyperthyroidism or the inadequate secretion of insulin in type 1 diabetes mellitus. Other functional defects might include impaired nerve conduction and muscular contraction.

The term syndrome is often applied to describe certain diseases that are characterized by multiple abnormalities that form a distinct clinical picture. For example, Cushing’s syndrome  occurs when an excess of the hormone cortisol produces a combination of clinical features that include hirsutism (excessive growth of facial hair), obesity, hypertension andcharacteristic facial and body features.

Some diseases frequently present with complications, that is, new or separate processes secondary to, and a consequence of, the initial disease. Diabetic cataracts, retinopathy and nephropathy are all chronic or long-term complications of diabetes mellitus.

The manifestations of a disease in a given person are not static and are affected by compensatory mechanisms in the body as well as by environmental influences and responses to treatment. Diseases often have a range of manifestations and their presence and severity may vary from patient to patient. In addition to differences between individuals, differences occur within an individual at different stages of development, from infancy to old age. Figure 1.5 outlines the key features of some diseases in terms of their etiology, pathogenesis and manifestations. 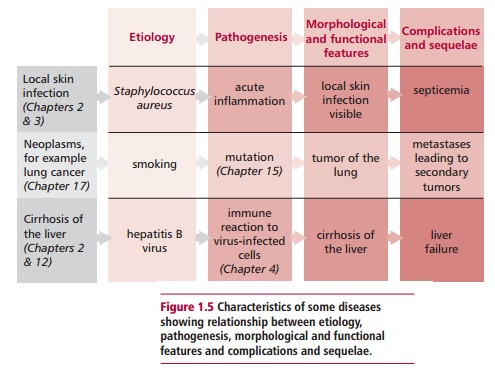 OUTCOME OF A DISEASE

The prognosis of a disease is its likely outcome. Prognoses can vary considerably between different diseases and, of course, can be influenced by treatment. Hence when giving a prognosis, it is necessary to clarify if the disease is following its natural course or whether there is, or needs to be, medical or surgical intervention. A viral disease such as German measles (rubella) will normally resolve of its own accord, whereas a broken leg or a heart attack needs treatment. With some diseases, especially some cancers, patients may go through a period of good health with a reduction or disappearance of the symptoms and the disease is said to be in remission. However, a relapsemay occur with a return of the disease symptoms following this period of apparent recovery. Diseases with a tendency towards remission and relapse include acute lymphoblastic leukemia and ulcerative colitis.