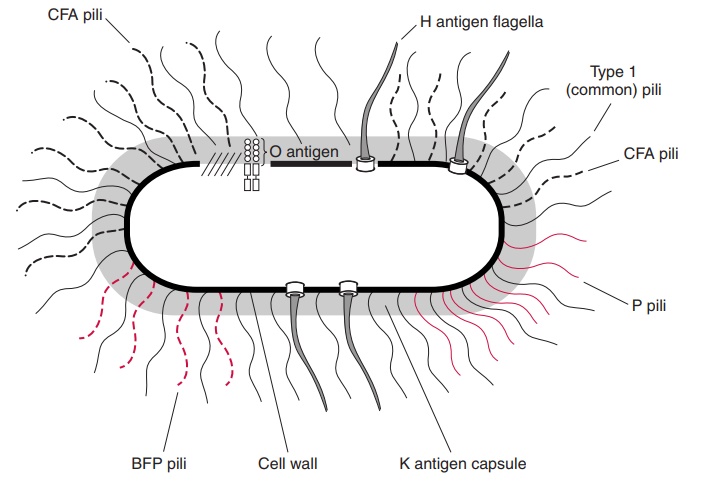 The Enterobacteriaceae are among the largest bacteria, measuring 2 to 4μm in length and 0.4 to 0.6μm in width, with parallel sides and rounded ends.

The Enterobacteriaceae are among the largest bacteria, measuring 2 to 4μm in length and 0.4 to 0.6μm in width, with parallel sides and rounded ends. Forms range from large coccobacilli to elongated, filamentous rods. The organisms do not form spores or demon-strate acid fastness.

The cell wall, cell membrane, and internal structures are morphologically similar for all Enterobacteriaceae, and follow the cell plan described for Gram-negative bacteria. Components of the cell wall and surface, which are antigenic, have been exten-sively studied in some genera and form the basis of systems dividing species into serotypes (Fig 21 – 1). The outer membrane lipopolysaccharide (LPS) is called the O antigen. Its antigenic specificity is determined by the composition of the sugars thatform the long terminal polysaccharide side chains linked to the core polysaccharide and lipid A. Cell surface polysaccharides may form a well-defined capsule or an amorphous slime layer and are termed the K antigen (from the Danish Kapsel, capsule). Motile strains have protein peritrichous flagella, which extend well beyond the cell wall and are called the H antigen. Many of the Enterobacteriaceae have surface pili, which are anti-genic proteins but not yet part of any formal typing scheme. 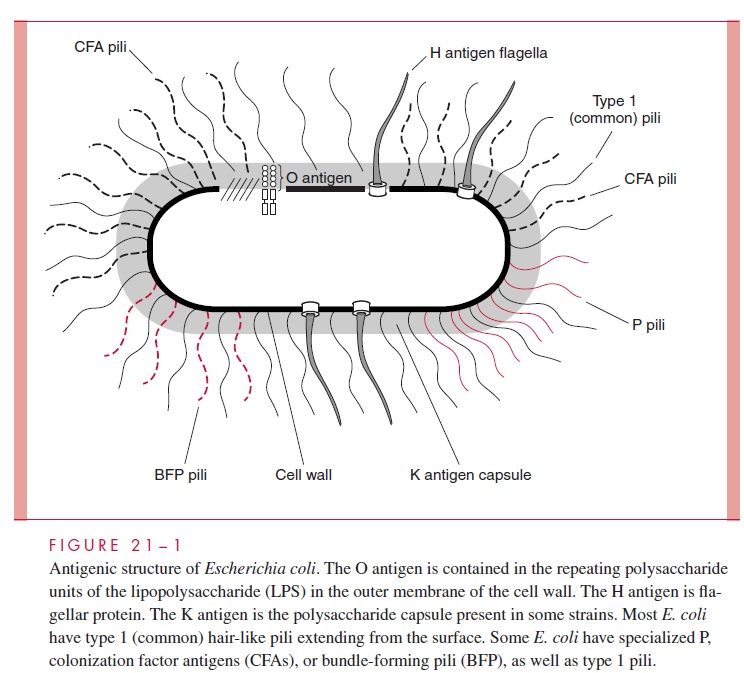 Enterobacteriaceae grow readily on simple media, often with only a single carbon energy source. Growth is rapid under both aerobic and anaerobic conditions, producing 2- to 5-mm colonies on agar media and diffuse turbidity in broth after 12 to 18 hours of incu-bation. All Enterobacteriaceae ferment glucose, reduce nitrates to nitrites, and are oxidase negative.

Genus and species designations are based on phenotypic characteristics, such as patterns of carbohydrate fermentation, and amino acid breakdown. The O, K, and H antigens are used to further divide some species into multiple serotypes. These types are expressed  with letter and number of the specific antigen, such as Escherichia coliO157:H7, the cause of numerous food-borne outbreaks. These antigenic designations have been estab-lished only for the most important species and are limited to the structures at hand. For example, many species lack capsules and/or flagella. In recent years, DNA and RNA ho- mology data have been used to validate these relationships and establish new ones. The genera containing the species most virulent for humans are Escherichia, Shigella, Salmo- nella, Klebsiella, and Yersinia. Other less common medically important genera are Enter- obacter, Serratia, Proteus, Morganella, and Providencia.

In addition to the LPS endotoxin common to all Gram-negative bacteria, some Enter-obacteriaceae also produceprotein exotoxins,which act on host cells by damaging mem-branes, inhibiting protein synthesis, or altering metabolic pathways. The end result of these actions may be cell death (cytotoxin) or a physiologic alteration, the net effect of which depends on the function of the affected cell. For example, enterotoxins act on in-testinal enterocytes, causing the net secretion of water and electrolytes into the gut to pro-duce diarrhea. Although these toxins are most strongly associated with E. coli, Shigella, and Yersinia, others with the same or very similar actions have now been discovered in other species. When found in another species, the toxin may differ by a few amino acids in structure and in genetic regulation but has the same basic action on host cells. Details of these toxins are discussed below in relation to their prototype species.