Most Enterobacteriaceae are primarily colonizers of the lower gastrointestinal tract of humans and animals.

Most Enterobacteriaceae are primarily colonizers of the lower gastrointestinal tract of humans and animals. Many species survive readily in nature and live freely anywhere water and minimal energy sources are available. In humans, they are the major facultative compo-nents of the colonic bacterial flora and are also found in the female genital tract and as tran-sient colonizers of the skin. Enterobacteriaceae are scant in the respiratory tract of healthy individuals; however, their numbers may increase in hospitalized patients with chronic de-bilitating diseases. E. coli is the most common species of Enterobacteriaceae found among the indigenous flora, followed byKlebsiella, Proteus, and Enterobacter species. Salmonella and Shigella species are not considered members of the normal flora, although carrier states can exist. Shigellaand Salmonella serotype Typhi are strict human pathogens.

Enterobacteriaceae are often poised to take advantage of their common presence in the environment and normal flora to produce disease when they gain access to normally ster-ile body sites. Surface structures such as pili are known to aid this process for some species and surely do for many others. Once in deeper tissues, their ability to persist and cause injury is little understood except for the action of LPS endotoxin and the species known to produce exotoxins or capsules. The prototype opportunistic infection is the UTI, in which Enterobacteriaceae gain access to the urinary bladder due to minor trauma or instrumentation. Strains able to adhere to uroepithelial cell can persist and multiply in the nutrient-rich urine, sometimes spreading through the ureters to the renal pelvis and kidney (pyelonephritis). Likewise, mucosal or skin trauma can allow access to soft tissues and aspiration to the lung when the relevant site is colonized with Enterobacteriaceae.

Salmonella, Shigella, Yersinia enterocolitica, and certain strains of E. coli are able to pro-duce disease in the intestinal tract. These intestinal pathogens have invasive properties or virulence factors such as cytotoxins and enterotoxins, which correlate with the type of diar-rhea they produce. In general, the invasive and cytotoxic strains produce an inflammatory diarrhea called dysentery with white blood cells (WBCs) and/or blood in the stool. The enterotoxin-producing strains cause a watery diarrheain which fluid loss is the primary pathophysiologic feature. For a few species, the intestinal tract is the portal of entry, but the disease is systemic due to spread of bacteria to multiple organs. Enteric (typhoid) fever caused by Salmonella serotype Typhi is the prototype of this form of infection.

In addition to adherence pili, LPS, and exotoxins, the Enterobacteriaceae produce a myr-iad of other virulence factors in order to cause disease. Many of them are deployed in a complex and sequential fashion in response to environmental cues (temperature, iron, cal-cium) or as yet unknown factors. 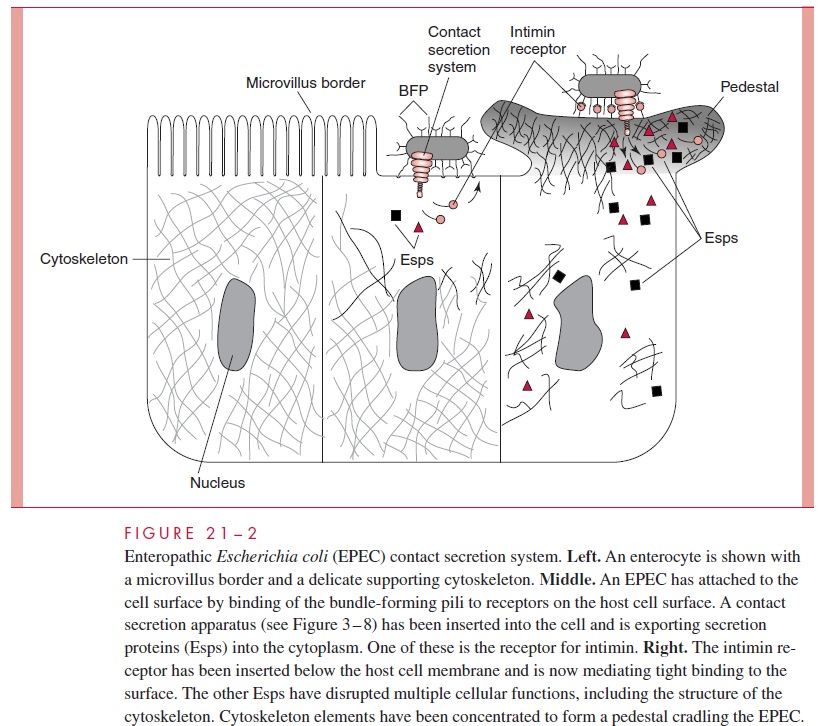 Some bacteria have contact secretion systems (Fig 21 – 2) that target human cells by lit-erally delivering a syringe-like injection of virulence factors into the cytoplasm of host cells.

The genes for these factors, located in the chromosome, plasmids, or both, are con-trolled by interactive regulators that seem to produce each virulence factor exactly when it is needed. The genes themselves are often organized into clusters that include the genes for the effector molecules as well as their regulatory proteins. This is particu-larly true for complex characteristics like invasiveness which involve multiple sequen-tial steps. Some of these gene clusters are called pathogenicity islands (PAIs) because their overall genetic makeup is foreign enough to the rest of the genome of the organ-ism that they appear to have been acquired from another bacterium in the genetically distant past. In particular, PAIs are associated with contact secretion systems where they contain the structural genes for the injection apparatus as well as the virulence factors injected.

Little is understood about immunity to the broad range of opportunistic infections caused by Enterobacteriaceae. Antibody directed against an LPS core antigen has been shown toprovide a degree of protection against Gram-negative endotoxemia, but the diversity of antigens and virulence factors among the Enterobacteriaceae is too great to expect broad immunity. Immunity to intestinal infection is generally short-lived and will be discussed where it is relevant to specific intestinal pathogens.