Shigella is the classic cause of dysentery, which is typically spread person-to- person under poor sanitary conditions.

Shigella is the classic cause of dysentery, which is typically spread person-to- person under poor sanitary conditions. The illness begins as a watery diarrhea but evolves  into  an  intense  colitis  with  frequent  small-volume  stools  that  contain blood and pus. Despite the invasive properties of the causal organism, the infec- tion usually does not spread outside the intestinal tract.

Shigellosis is a strictly human disease with no animal reservoirs. In the United States, the number of reported cases has remained in the range of 8 to 12 cases per 100,000 popula-tion for over 30 years. Worldwide, it is consistently one of the most common causes of in-fectious diarrhea in both developed and developing countries, and it is estimated to cause 600,000 deaths per year. The organisms can be readily transmitted by the fecal – oral route through person-to-person contact or by contamination of food or water. This mode of spread is efficient; the infecting dose is less than 200 organisms in volunteer studies. The secondary attack rates among family members are as high as 40%.

The incidence and spread of shigellosis is directly related to personal and community sanitary practices. In developed countries, it is largely a pediatric disease. In countries where the sanitary infrastructure is inadequate and in institutions plagued by crowding and poor hygienic conditions the disease may be more widespread. Wartime and natural disasters create similar circumstances. The most common species are S. sonnei and S. flexneri, with S. dysenteriae largely limited to underdeveloped tropical areas.S. dysente-riae, type 1 produces the most severe disease, historically known as “bacillary dysentery.”This condition has slowed the march of many an army; it was the leading cause of death in the notorious Andersonville prison camp during the American Civil War.

Shigella, unlike Vibrio cholerae and most Salmonella species, is acid-resistant andsurvives passage through the stomach to reach the intestine. Once there, the funda-mental pathogenic event is invasion of the human colonic mucosa. This triggers an intense acute inflammatory response with mucosal ulceration and abscess formation. Invasion and spread is a multistep process (Fig 21 – 5), which is the same in Shigella and EIEC. 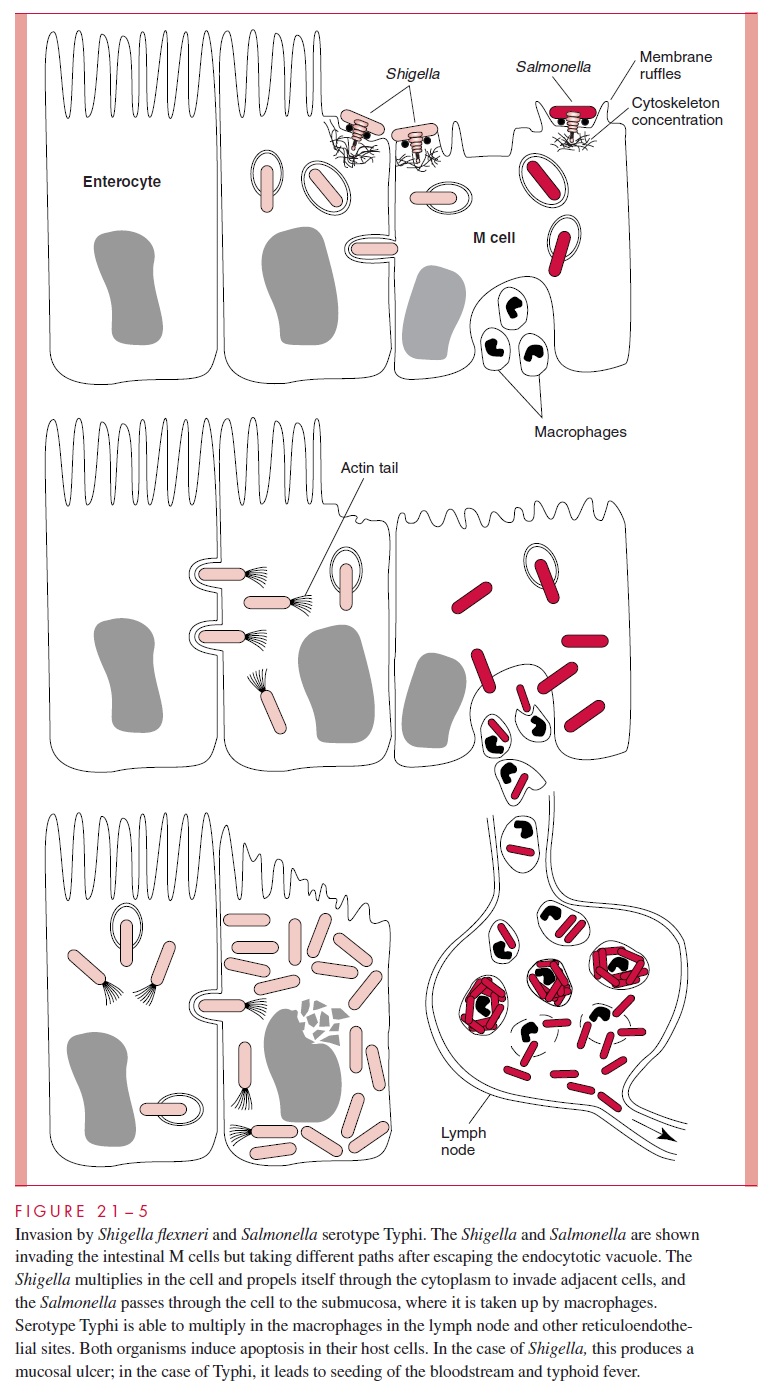 Shigella initially crosses the mucosal membrane by entering the follicle-associatedM cells of the intestine, which lack the highly organized brush borders of absorptive ente-rocytes. The Shigella adhere selectively to M cells and can transcytose through them into the underlying collection of phagocytic cells (Fig 21 – 6). Bacteria inside M cells and phagocytic macrophages are able to cause their demise by activating normal programmed cell death (apoptosis). Bacteria released from the M cell contact the basolateral side of 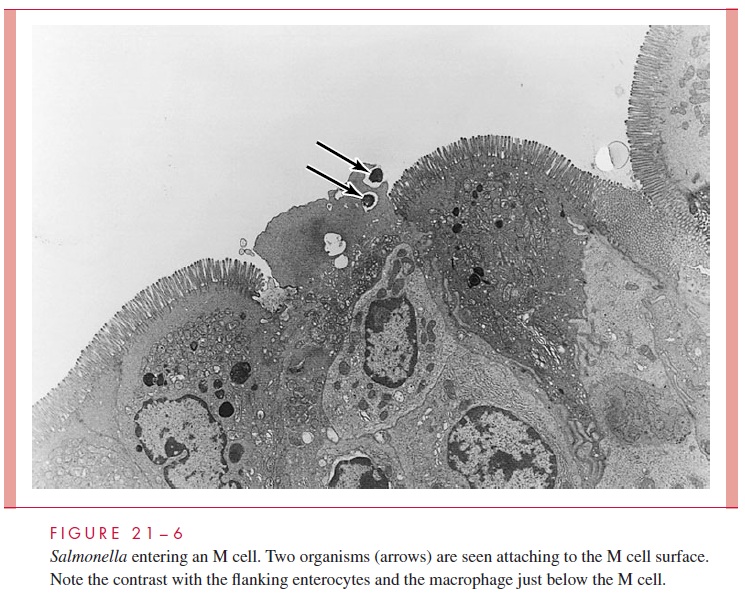 enterocytes and initiate a multistep invasion process mediated by a set of invasion plas-mid antigens (IpaA, IpaB, IpaC). On contact with the enterocyte, these antigens are in-jected by a contact secretion system and each has its individual action. These include cell attachment, cytoskeleton reorganization, actin polymerization, and induction of apoptosis. Rather than create A/E lesions as with EPEC and EHEC, this cytoskeleton modification process involves accumulation of filamentous actin underneath the host cell cytoplasmic membrane, inducing engulfment and internalization of the bacterium into the host cell by endocytosis.

Shigella brought into cells are highly adapted to the intracellular environment andmake unique use of it to continue the infection. Although initially the bacteria are sur-rounded by a phagocytic vacuole, they escape within 15 minutes and enter the cytoplas-mic compartment of the host cell. Almost immediately, they orient in parallel with the filaments of the actin cytoskeleton of the cell and initiate a process in which they control polymerization of the monomers that make up the actin fibrils. This process creates an actin “tail” at one end of the microbe, which appears to propel it through the cytoplasm like a comet. This exploitation of the cytoskeletal apparatus allows nonmotile Shigella to not only replicate in the cell but to move efficiently through it. Eventually, the bacteria encounter the host cell membrane, much of which is adjacent to the neighboring entero-cytes. At this point some Shigella rebound, but others push the membrane as much as 20μm into the adjacent cell. This invasion of the neighboring enterocyte forms finger-like projections, which eventually pinch off, placing the bacterium within a new cell but surrounded by double membrane. The organisms then lyse both membranes and are re-leased into the cytoplasm, free to begin the cycle anew.

The cell-by-cell extension of this process radially creates focal ulcers in the mu-cosa, particularly in the colon. The ulcers add a hemorrhagic component and allow Shigellato reach the lamina propria, where they evoke an intense acute inflammatoryresponse. Extension of the infection beyond the lamina is unusual in healthy individu-als. The diarrhea created by this process is almost purely inflammatory, consisting of small volume stools containing WBCs, RBCs, bacteria, and little else. This is classic dysentery.

Some Shigella produce Shiga toxin, which is not essential for disease, but does con-tribute to the severity of the illness. The original and most potent producer of Shiga toxin, S. dysenteriae type 1, is the only Shigella with a significant mortality rate among previ-ously healthy individuals. This is probably due to systemic effects of the toxin, which can be the same as described above for the EHEC, including HUS. Enterotoxins have also been described that may be the basis of the watery diarrhea sometimes observed in the early phases.

All virulent Shigella and EIEC carry a very large plasmid that has several genes es-sential for the attachment and entry process, including the Ipa genes. The characteristics of Shigella entry and interaction with cellular elements are very similar to those observed with Listeria monocytogenes , which is Gram-positive, motile, and prefers livestock to humans. Finding that such dissimilar bacteria use such similar tactics to infect their preferred host suggests that this represents a common thread in the selective pressures for a microbe to become a “successful” enteric pathogen.

Shigella infection produces relatively short-lived immunity to reinfection with homolo- gous serogroups. There is no consensus on the mechanisms involved.