In men, the primary site of infection is the urethra. Symptoms begin 2 to 7 days after in-fection and consist primarily of purulent urethral discharge and dysuria.

In men, the primary site of infection is the urethra. Symptoms begin 2 to 7 days after in-fection and consist primarily of purulent urethral discharge and dysuria. Although uncom-mon, local extension can lead to epididymitis or prostatitis. The endocervix is the primary site in women, in whom symptoms include increased vaginal discharge, urinary fre-quency, dysuria, abdominal pain, and menstrual abnormalities. As mentioned previously, symptoms may be mild or absent in either sex, particularly women.

Rectal gonorrhea occurs after rectal intercourse or, in women, after contamination with infected vaginal secretions. This condition is generally asymptomatic but may cause tenesmus, discharge, and rectal bleeding. Pharyngeal gonorrhea is transmitted by oral – genital sex and, again, is usually asymptomatic. Sore throat and cervical adenitis may occur. Infection of other structures near primary infection sites, such as Bartholin’s glands in women, may lead to abscess formation.

Inoculation of gonococci into the conjunctiva produces a severe, acute, purulent con-junctivitis. Although this infection may occur at any age, the most serious form is gono-coccal ophthalmia neonatorum, a disease acquired by a newborn from an infected mother. The disease was formerly a common cause of blindness, which is now prevented by the use of prophylactic topical eye drops or ointment (silver nitrate, erythromycin, or tetracy-cline) at birth.

The clinical syndrome of PID develops in 10% to 20% of women with gonorrhea. The findings include fever, lower abdominal pain (usually bilateral), adnexal tenderness, and leukocytosis with or without signs of local infection. These features are caused by spread of organisms along the fallopian tubes to produce salpingitis and into the pelvic cavity to produce pelvic peritonitis and abscesses. PID is also known to develop when other genital pathogens ascend by the same route. These organisms include anaerobes andChlamydiatrachomatis, which may appear alone or mixed with gonococci. The most serious compli-cations of PID are infertility and ectopic pregnancy secondary to scarring of the fallopian tubes.

Any of the local forms of gonorrhea or their extensions such as PID may lead to bac-teremia. In the bacteremic phase, the primary features are fever; migratory polyarthralgia; and a petechial, maculopapular, or pustular rash. Some of these features may be immuno-logically mediated; gonococci are infrequently isolated from the skin or joints at this stage despite their presence in the blood. The bacteremia may lead to metastatic infec-tions such as endocarditis and meningitis, but the most common is purulent arthritis. The arthritis typically follows the bacteremia and involves large joints such as elbows and knees. Gonococci are readily cultured from the pus.

The presence of multiple pairs of bean-shaped, Gram-negative diplococci within a neutrophil  is highly characteristic of gonorrhea when the smear is from a genital site (Fig 20 – 5). The direct Gram smear is more than 95% sensitive and specific in symptomatic men. 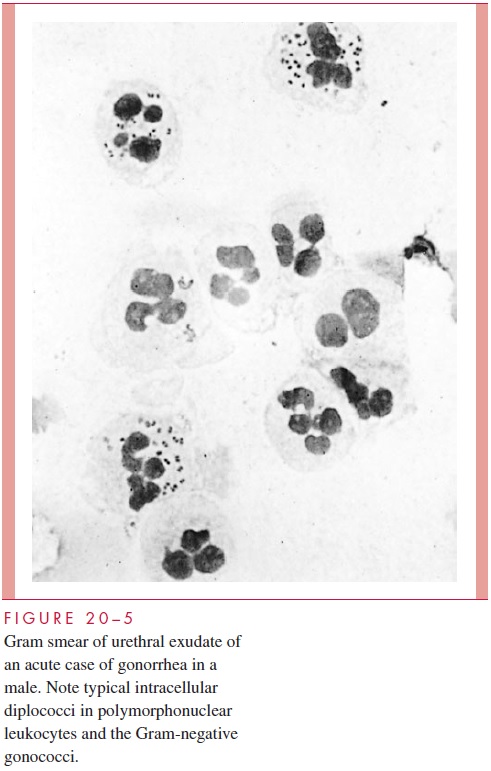 Unfortunately, it is only 50 to 70% sensitive in women, and its specificity is complicated by the presence of other bacteria in the female genital flora that may have a similar mor-phology. Experience is required in reading smears, particularly in women. Although a positive Gram smear is generally accepted as diagnostic in men, it should not be used as the sole source for diagnosis when the findings are unexpected or have social (divorce) or legal (rape, child abuse) implications.

Attention to detail is necessary for isolation of the gonococcus, because it is a fragile or-ganism that is often mixed with hardier members of the normal flora. Success requires proper selection of culture sites, protection of specimens from environmental exposure, culture on appropriate media, and definitive laboratory identification. In men, the best specimen is urethral exudate or urethral scrapings (obtained with a loop or special swab). In women, cervical swabs are preferred over urethral or vaginal specimens. The highest diagnostic yield in women is with the combination of a cervical and an anal canal culture, because some patients with rectal gonorrhea have negative cervical cultures. Throat or rectal cultures in men are needed only if indicated by the patient’s sexual practices.

Swabs may be streaked directly onto culture medium or transmitted to the laboratory in a suitable transport medium if the delay is not more than 4 hours. Laboratory requests must specify the suspicion of gonorrhea, so that media that satisfy the nutritional require-ments of the gonococcus and inhibit competing normal flora can be seeded. The most common medium is Martin – Lewis agar, an enriched selective chocolate agar. The exact formulation has changed over the years, but includes antimicrobics active against Gram-positive bacteria (vancomycin), Gram-negative bacteria (colistin, trimethoprim), and fungi (nystatin, anisomycin) at concentrations that do not inhibit N. gonorrhoeae.

Colonies appear after 1 to 2 days of incubation in carbon dioxide at 35°C. They may be identified as Neisseria by demonstration of typical Gram stain morphology and a posi-tive oxidase test. Classically, speciation is by carbohydrate degradation pattern, but this approach has been replaced by immunologic procedures (immunofluorescence, coaggluti-nation, enzyme immunoassay) using monoclonal antibodies to unique antigens such as protein I. Neisseria species other than N. gonorrhoeae are unusual in genital specimens, but speciation is the only way to be certain of the diagnosis.

Much effort has been directed at developing immunoassay and nucleic acid hybridization methods that detect gonococci in clinical specimens without culture. Such methods could have particular importance for screening populations where culture is impractical. Of these only the DNA amplification methods have the sensitivity to substitute for culture.The main barrier to their broader use is cost, which may be overcome by combining them with Chlamydia detection that targets the same clinical population.

Attempts to develop a serologic test for gonorrhea have not yet achieved the needed sen- sitivity and specificity. A test that would detect the disease in asymptomatic patients would be very useful in control of this disease.

The treatment of gonorrhea, as with other sexually transmitted diseases, includes individ-ual patient issues as well as public health concerns. Patients who do not complete a course of treatment once they begin to feel better present a risk of continued transmission and selection of resistant strains. For this reason, definitive treatment at the time of the initial visit has been the favored approach. For decades, this was easily accomplished with a single intramuscular injection of penicillin G.

Penicillin is no longer used, because of the development of two mechanisms of resis-tance. The first to be recognized was a slightly decreased susceptibility linked to altered PBPs. Over three decades, the minimum inhibitory concentrations (MICs) of altered PBP gonococci gradually increased (0.1 to more than 4.0 μg/mL), along with the dosage of the single injection favored for outpatient treatment. Eventually, the volume required to deliver the recommended dose began to exceed that which could be humanely adminis-tered, even injecting both buttocks. A second resistance mechanism, penicillinase produc-tion, first appeared in the Far East during the Viet Nam war and by the mid-1980s was endemic throughout the world. These strains produce a plasmid-encoded -lactamase identical to that of members of the Enterobacteriaceae and have MICs that far exceed achievable therapeutic levels.

This situation has caused a shift in treatment of genital gonorrhea to third-generation cephalosporins, because of their resistance to the β-lactamases prevalent in gonococci. The recommended agents have high enough activity to still be used as single dose treat-ment either intramuscularly (ceftriaxone) or orally (cefixime). Other agents recommended for primary treatment include fluoroquinolones (ciprofloxacin or ofloxacin) and azithromycin. Doxycycline is also effective but must be given orally for 7 days. Doxycy-cline and azithromycin have the additional advantage of also being effective against Chlamydia trachomatis , which may also be present in up to one third ofgonorrhea cases. Resistance to quinolones is frequent enough to limit their use in some parts of the world. Azithromycin resistance is just beginning to be reported.

Methods to block direct mucosal contact (condoms) or inhibit the gonococcus (vaginal foams, douches) have been shown to provide protection against gonorrhea if used properly. The classic public health methods of case – contact tracing and treatment are important but difficult due to the size of the infected population. The availability of a good serologic test would greatly aid control, as it has for syphilis. The development of a gonococcal vaccine awaits further understanding of immunity and its relationship to the shifting target pro-vided by the gonococcus.