N. gonorrhoeae grows well only on chocolate agar and on specialized medium en-riched to ensure its growth.

N. gonorrhoeae grows well only on chocolate agar and on specialized medium en-riched to ensure its growth. It requires carbon dioxide supplementation. Small, smooth, nonpigmented colonies appear after 18 to 24 hours and are well developed (2 to 4 mm) after 48 hours. Gonococci possess numerous pili that extend through and beyond the outer membrane (Fig 20 – 3), which are structurally similar to those of meningococci (see Table 20 – 1). In general, only fresh virulent isolates have pili. 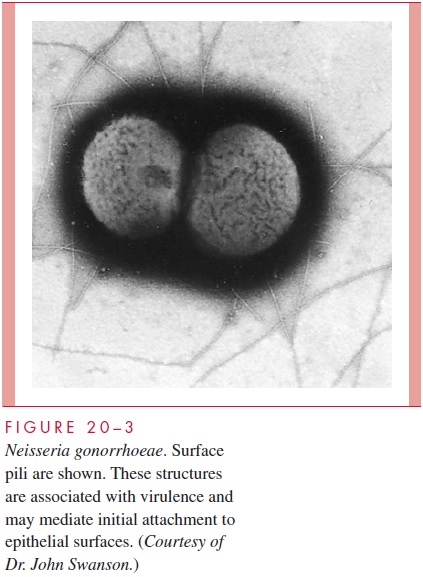 The gonococcal outer membrane is composed of phospholipids, LPS, LOS, and several distinct OMPs. The OMPs include porins (proteins IA and IB) and adherence proteins known as Opa or protein II. Opa proteins are a set of at least 12 proteins that get their name from the opaque appearance they give to colonies as a result of adhesion between gonococ-cal cells. A variable number of the Opa proteins may be expressed at any one time.

N. gonorrhoeae and N. meningitidis are among several microorganisms whose surfacestructures are known to change antigenically from generation to generation during growth of a single strain. The mechanisms involved have been more extensively studied in gono-cocci but appear to be similar in both species. The antigenic structures of major interest are pili, Opa proteins, and LOS, for which there is evidence of antigenic variation both in vitro and in vivo. The genetic mechanisms involved are illustrated in Figure 20 – 4. 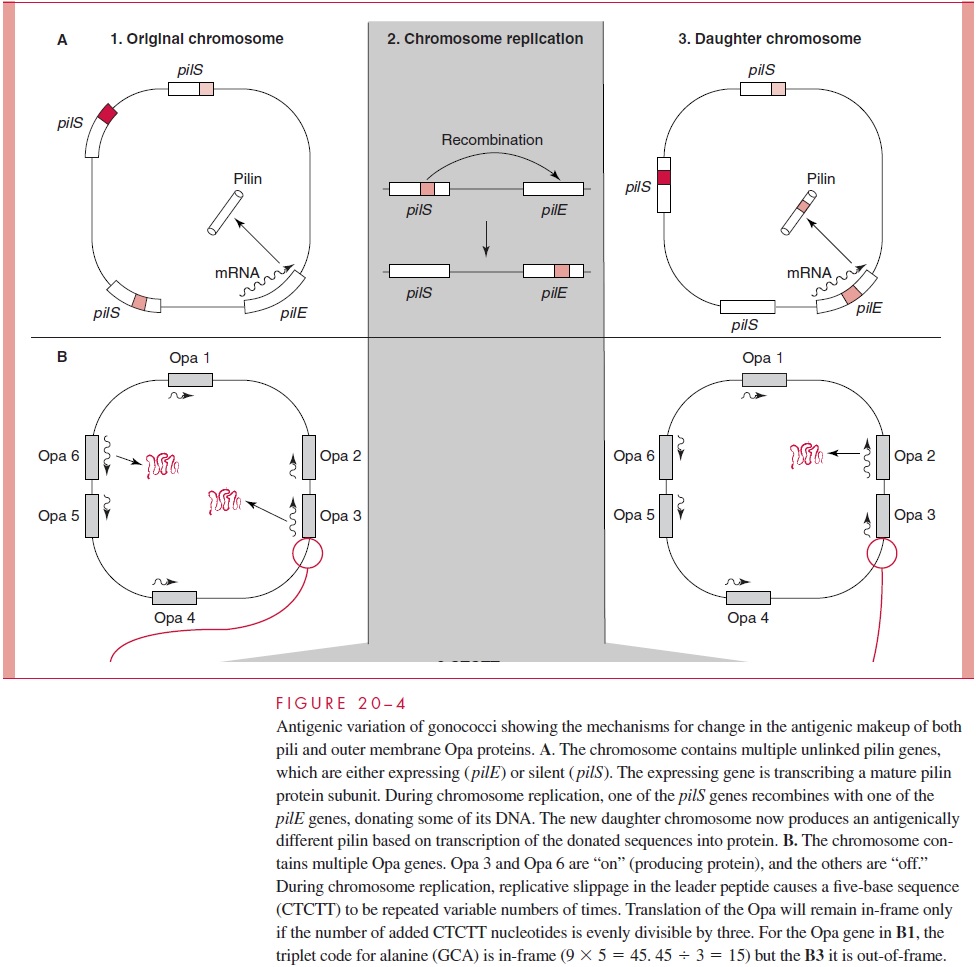 Gonococcal pili are antigenically variable to an extraordinary extent. There are mul-tiple genetic mechanisms, but the most important one appears to be recombinational ex-change between the multiple pilin genes present in the chromosome of every strain. Some of these genes are complete and able to express pilin (pilE). Others are not due to lack of an effective promoter and are thus silent (pilS). When recombination between ex-pression and silent loci results in the donation of new sequences to an expression locus, the result can be expression of a pilin with changes in its amino acid composition and thus its antigenicity. The recombination could also involve exogenous DNA from another cell or strain, because gonococci naturally take up species-specific DNA by transformation. The process is complex, involving other genes that play a role in the assembly of pili and their functional characteristics, such as cellular adhesion. The nu-merous possible outcomes include no pilin subunits, pilin subunits unable to assemble, mature pili with altered functional characteristics, and fully functional pili with a new antigenic makeup.

The multiple gonococcal Opa proteins are each encoded by separate genes scattered around the genome. Various combinations of these genes may be either “on” or “off ” at any one time. It has been observed that this switching between different Opa proteins oc-curs at a high rate per cell per generation. Control of the switch is via the number of repeats of a pentameric sequence (CTCTT) within the leader peptide encoding region of the gene. These are created by replicative slippage — a kind of “stuttering” during tran-scription. The number of repeats of this sequence varies widely (7 to 28), and when it comes time for translation the number of repeats determines whether the gene will be in or out of frame to translate the protein (Figure 20– 4, B). Thus, by virtue of a translational frame shift mechanism, each Opa gene has its own switch, which can change with every cell cycle.

Variation in gonococcal LOS has been observed in volunteer subjects challenged with intraurethral N.gonorrhoeae, but the genetic mechanism is unknown. Taken together, these multifactorial, antigenic variations of the gonococcal surface may serve the dual purposes of escape from immune surveillance and timely provision of the ligands re-quired to bind to human cell receptors.