The male sex organs are formed of two pairs of testes and a pair of vasa deferentia. Testes are found in segments 10 and 11. They are tufts of finger shaped processes attached to the anterior septa of segments 10 and 11. There are two pairs of seminal versicles formed as outgrowths of the testicu-lar segments. Further two pairs of seminal funnels called ciliary rosettes are situated in the same segment as the testes. The ciliated funnels of the same side are connected to a long tube called vas deferens. The two vasa deferentia of both sides run backwards along the ventral body wall upto the 18th segment where they open to the exterior through the male gential aper-ture. Male genital apertures contain penial setae for copulation. A pair of prostate glands, each in the form of a much coiled tube are situated in seg-ments 18 and 19. The prostate glands open to the exterior along with the vas deferens. The secretion of the prostate glands help to arrange the sperms into bundles called spermatophores. 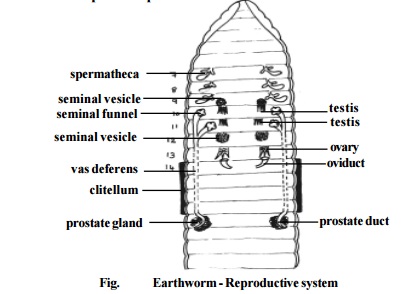 A pair of ovaries are found lying in segment 13. They are attached to the anterior septum of the 13th segment. Each ovary is a flat structure with a number of finger like processes. The ova are arranged in a linear order in the ovaries. There are a pair of oviducts. They open internally into the 13th seg-ment and externally on the ventral surface of the 14th segment. Three pairs of spermathecae are present in segments 7, 8 and 9. These external openings are situated in the intersegmental grooves of segments 6 and 7, 7 and 8, and 8 and 9. The spermatozoa received from another individual during copulation are stored in spermathecae .

Later the glandular cells of the clitellum secrete a thick fluid which hardens into a girdle surrounding the clitellum.

The girdle is moved forward by the wriggling movements of the body. As the girdle is moved forwards it receives the ova and spermatozoa. The girdle con-taining the germ cells (ova and sperms) and the nutrient albuminous fluid is slipped off at the anterior end and it becomes a closed sac called the cocoon. Fertilization and the development of the eggs into worms takes place within the cocoon. Young worms come out of the cocoon after complete development. 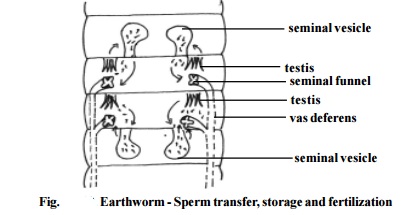